The exclusive poll by Techne UK shows that Ms Truss is backed by twice as many voters who want a Conservative Prime Minister compared to her rival Mr Sunak. Added to that her policy of cutting taxes now gets the backing of almost two thirds of all voters (60 percent) compared to Mr Sunak’s plans to pay off debt first which receives less than a third (29 percent). It comes after Express.co.uk revealed that Ms Truss intends to appoint the first ever female Chancellor – Therese Coffey – to push through her bold economic policy including £30 billion of tax cuts.

The clash over taxation has been the centrepiece of a fiery leadership campaign with Truss and Sunak coming to verbal blows on the issue in all the TV debates and hustings.

Even more than half (57 percent) of Labour voters agree with Ms Truss.

But Ms Truss’s backing for removing green levies to bring down energy bills has also struck a chord with voters with backing of 62 percent compared to 30 percent who back the measures aimed at helping achieve Net Zero targets.

This increased to almost eight in 10 (78 percent) of Tory voters backing Ms Truss’ plans to temporarily ditch the green levies on bills. 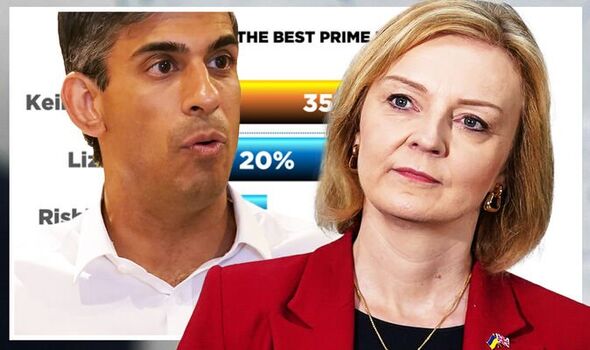 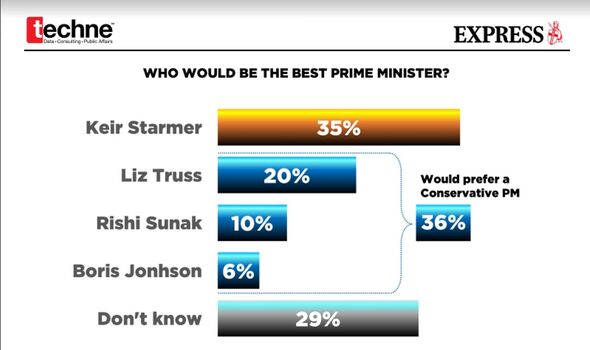 The polling is also devastating for Labour leader Sir Keir Starmer who is still behind when voters are asked if they want him or a choice of Conservatives as Prime Minister.

After a week where he had to sack his transport spokesman Sam Tarry for defying his will and joining an RMT picket line, just 35 percent see him as the best person to lead the country.

In contrast 36 percent wanted a Conservative with Ms Truss the overwhelming preference of those with 20 percent.

Mr Sunak got just half her support on 10 percent while, with a petition of members pushing for Boris Johnson to stay on, 6 percent of those polled wanted him in Downing Street.

Techne UK chief executive Michela Morizzo said that the results of this week’s polling has underlined that the Conservatives “can be competitive again if they get the leadership right.” 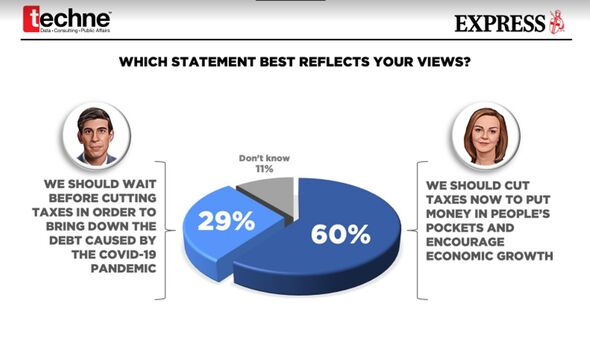 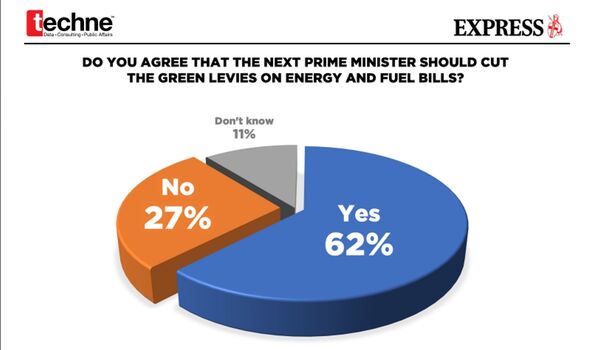 The weekly Express.co.uk/ Techne tracker poll revealed that the Tories continue to close the gap and are now 7 points behind Labour on 33 percent (up 1) to 40 percent (down 1).

“Whatever the general public feels about the choice of new Conservative leader – whether it be Truss or Sunak – the wall-to-wall media coverage of the Party as it seeks to choose their preferred candidate to replace Boris Johnson as the next Prime Minister is giving the party the reset and new start that they so urgently require.

“But, of course, the new leader will be then in charge of transforming this trend into real votes for the Conservative party to face Labour at the next General Elections.” 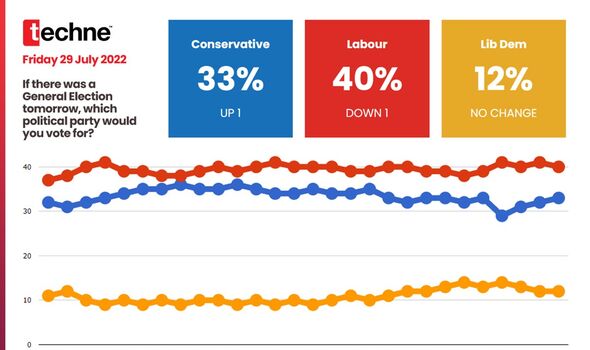 Ms Truss’ tax plans include reversing Mr Sunak’s increase in the National Insurance payments which were brought in to fund social care and pay for the NHS backlog caused by the pandemic.

She has also vowed to bring down corporation tax on business profits to increase investment in the UK.

She has said that bring down the tax burden is her “top priority” and instead the £30 billion of tax cuts is affordable.

A spokeswoman for Liz Truss said: “This poll shows Liz is the clear choice to lead the Conservative party and secure a victory against Sir Keir Starmer at the next election.

“People know they can trust Liz to deliver and stand up for people who work hard and do the right thing.”