Trump tweeted ‘when the looting starts, the shooting starts’, referring to protests about deadly arrest of George Floyd. 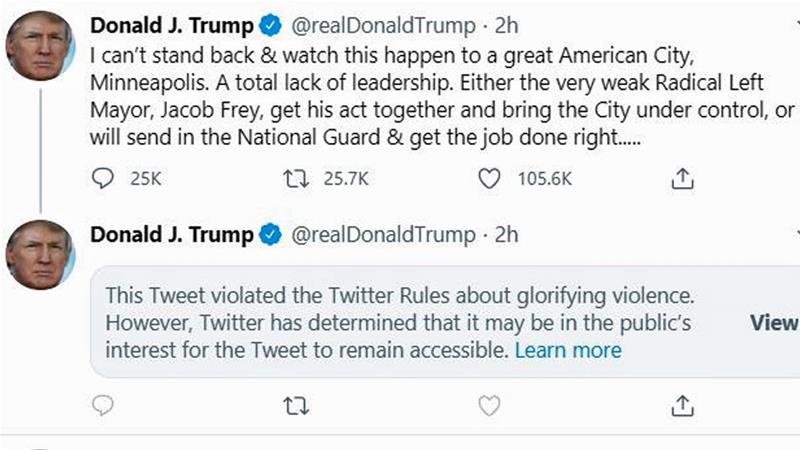 Twitter has, for the first time, flagged and hidden a tweet by United States President Donald Trump, saying he violated Twitter’s rules about glorifying violence.

Trump took to Twitter on Friday, saying “when the looting starts, the shooting starts”, in reference to nationwide protests that followed the deadly arrest of George Floyd, an unarmed Black man, in Minneapolis.

Floyd died on Monday after a white Minneapolis police officer used his knee to pin Floyd’s neck to the ground for several minutes.

On Thursday night, protests erupted across the US as anger over Floyd’s death intensified, with some demonstrators gaining access to a police precinct in Minneapolis and setting sections of the building on fire.

Trump responded to the protest on Twitter, saying: “I can’t stand back & watch this happen to a great American City, Minneapolis. A total lack of leadership. Either the very weak Radical Left Mayor, Jacob Frey, get his act together and bring the City under control, or I will send in the National Guard & get the job done right…..”

He then replied to his own tweet, saying: “….These THUGS are dishonoring the memory of George Floyd, and I won’t let that happen. Just spoke to Governor Tim Walz and told him that the Military is with him all the way. Any difficulty and we will assume control but, when the looting starts, the shooting starts. Thank you!”

In a thread, Twitter said it had taken the action “in the interest of preventing others from being inspired to commit violent acts”. People will still “be able to retweet with comment, but will not be able to like, reply or retweet it”.

It also added a link to its rules and policies, in which Twitter defines what it deems to be in public interest.

The move followed Twitter’s decision to apply fact checks to two of Trump’s earlier tweets about voting, prompting the US president to sign an executive order on Thursday challenging the liability protections in US law that serve as a bedrock for unfettered speech on the internet.

Trump said the fact checks were “editorial decisions” by Twitter and amounted to political activism. He said it should cost those companies their protection from lawsuits for what is posted on their platforms.

Trump and his allies, who rely heavily on Twitter to attack their foes, have long accused the tech giants of targeting conservatives on social media by fact-checking them or removing their posts.

“We’re fed up with it,” Trump said, claiming the order would uphold freedom of speech.

“What I think we can say is that we’re going to regulate it,” Trump said before signing it.

Twitter called the order “a reactionary and politicized approach to a landmark law” and said attempts to weaken Section 230 would “threaten the future of online speech”.

The order directs executive branch agencies to ask independent rule-making agencies including the Federal Communications Commission and the Federal Trade Commission to study whether they can place new regulations on the companies.

Jack Balkin, a constitutional law professor at Yale University said Trump, who is seeking a second term in November, “is seeking to frighten, coerce, scare, cajole social media companies to leave him alone and not do what Twitter has just done to him.”

Experts are doubtful that much could be done without an act of Congress although Trump has said he would push for legislative action as well.

A similar executive order was previously considered by the administration, but shelved over concerns that it could not pass legal muster and that it violated conservative principles on deregulation and free speech.

Dorsey added: “This does not make us an ‘arbiter of truth.’ Our intention is to connect the dots of conflicting statements and show the information in dispute so people can judge for themselves.”

“I just believe strongly that Facebook shouldn’t be the arbiter of truth of everything that people say online,” he said.