WASHINGTON — American troops are set to leave Afghanistan no later than Sept. 11, but the Pentagon, American spy agencies and Western allies are refining plans to deploy a less visible but still potent force in the region to prevent the country from again becoming a terrorist base.

Drawing on the hard lessons from President Barack Obama’s decision a decade ago to withdraw American troops from Iraq — allowing the rise of the Islamic State three years later — the Pentagon is discussing with allies where to reposition forces, possibly to neighboring Tajikistan, Kazakhstan and Uzbekistan, according to United States officials.

Attack planes aboard aircraft carriers and long-range bombers flying from land bases along the Persian Gulf, Indian Ocean and even in the United States could strike insurgent fighters spotted by armed surveillance drones.

But there are risks.

Afghan commandos who have been providing the bulk of intelligence on insurgent threats could disintegrate after the United States withdraws, leaving a large hole to fill.

Turkey, which has long had a direct relationship with Afghanistan in addition to its role in the North Atlantic Treaty Organization mission there, is leaving troops behind who could help the C.I.A. collect intelligence on Qaeda cells, officials note.

Still, planners at the military’s Central Command in Tampa, Fla., and Joint Staff in Washington have been developing options to offset the loss of American combat boots on the ground, and President Biden said on Wednesday that the revised approach would keep Al Qaeda at bay.

“We will not take our eye off the terrorist threat,” Mr. Biden said in a televised address from the White House. “We will reorganize our counterterrorism capabilities and the substantial assets in the region to prevent re-emergence of terrorist threat to our homeland.”

But some former top commanders, as well as lawmakers from both parties, warned that absent the unrelenting pressure from American Special Operations forces and intelligence operatives in the country, Al Qaeda could make a comeback in Taliban-dominated Afghanistan.

“As good as our intelligence and over-the-horizon capabilities are, there is no substitute for being there,” Joseph Maguire, a former top Navy SEAL commander who served as acting director of national intelligence in the Trump administration, said in an interview. “Our effectiveness in protecting our homeland will be significantly diminished.”

Even as military officials rushed to flesh out the details of Mr. Biden’s revised plan, top Defense Department officials and military commanders appear to have ruled out for now two other options that could be employed if this revised approach falls short.

More than 16,000 civilian contractors, including over 6,000 Americans, now provide security, logistics and other support in Afghanistan, according to recent figures compiled by the Pentagon. Top military officials on Wednesday played down any significant role for civilian contractors in combating Al Qaeda in Afghanistan, although some analysts say they could be used to train Afghan security forces.

Under Mr. Biden’s order, the United States is withdrawing 2,500 troops from Afghanistan, but the Pentagon actually has about 1,000 more troops on the ground there than it has publicly acknowledged. The murky accounting results from some Special Operations forces having been put “off the books,” Pentagon officials say, to include some elite Army Rangers, who work under both the Pentagon and the C.I.A. while deployed to Afghanistan.

But Pentagon officials said they would not resort to those tactics to slip undisclosed troops into Afghanistan after the departure deadline, even though some analysts voiced skepticism.

“We are actively engaged in counterterrorism where every effort is made to minimize the ‘troops’ — the boots on the ground — and replace them with an invisible force that can achieve just as much,” William M. Arkin, a longtime security analyst and author of a new book, “The Generals Have No Clothes: The Untold Story of Our Endless Wars,” said in an interview. 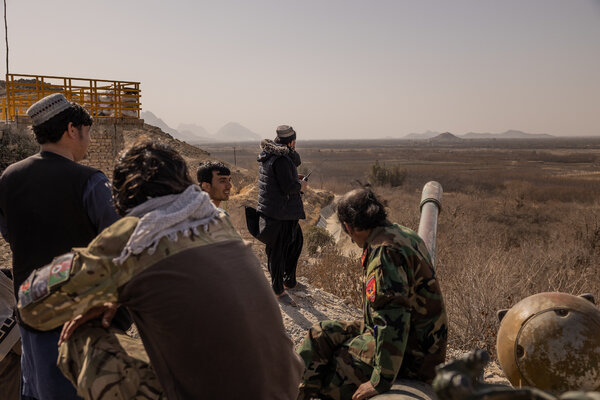 In his remarks, Mr. Biden said that the United States would remain closely involved in the peace process between Kabul and the Taliban, and would continue to provide security assistance to Afghan security forces. But the fear is that the American exit will lead to the collapse of a weak Afghan government and a deepening civil war with the Taliban, opening the door to a resurgence of Al Qaeda.

American intelligence analysts say security in the country could worsen almost immediately, given the seismic effect of Mr. Biden’s decision. Already, many elite Afghans have started to flee and applications for special immigrant visas have shot up, a senior U.S. official said.

Senior Biden administration officials say that American troops could leave Afghanistan in three months if the Taliban does not pick a fight. Mr. Biden and his top aides reiterated a warning to the Taliban on Wednesday that any attacks on withdrawing American and NATO troops would be met with swift retaliation, a response that could delay the departure.

Some former Special Operations commanders said the Pentagon should continue to train Afghan security forces as long as possible, even taking them out of the country for advanced, specialized, technical and leadership training, as American forces did with Iraqi troops in Jordan years ago.

But if Afghan security and intelligence forces falter drastically, that could significantly damage one of the United States’ best sources of intelligence on Al Qaeda and other insurgents.

“What we are really talking about are how to collect intelligence and then act against terrorist targets without any infrastructure or personnel in the country other than essentially the embassy in Kabul,” said Marc Polymeropoulos, a former C.I.A. officer who spent much of his career working on counterterrorism operations, including in Afghanistan.

“I just don’t see how the I.C. operates in a place like Afghanistan without the U.S. military side by side,” Mr. Polymeropoulos said in an email, referring to the intelligence community, including the C.I.A. “It is just far too dangerous.”

Daunting challenges face the American-backed Afghan security forces. Over the past year, they have lost territory from repeated assaults by the Taliban and have relied on U.S. air power to push back the insurgents.

With the Afghan government’s credibility waning, militias — once the main power holders during the days of the Afghan civil war in the 1990s — have rearmed and reappeared, even challenging Afghan security forces in some areas.

“If the president authorizes it, we will still be able to provide some level of military support to the Afghan national security forces after we depart the country,” William H. McRaven, the retired Navy admiral who directed the raid that killed Osama bin Laden, said in an interview on Wednesday.

For the Pentagon and the intelligence agencies, a key issue now is how readily counterterrorism operations can be carried out from beyond Afghanistan. The history of such operations has a decidedly mixed record. Cruise missile strikes launched from distant ships against terrorist targets in Afghanistan have had a low rate of success.

The United States maintains a string of air bases in the Persian Gulf region, as well as in Jordan, and the Pentagon operates a major regional air headquarters in Qatar. But the farther that Special Operations forces have to travel to strike a target, the more likely the operations are to fail, either by missing their mark or resulting in a catastrophic failure that could kill American service members or civilians on the ground, according to officials who have studied the record.

Defense Secretary Lloyd J. Austin III, meeting with allies of the North Atlantic Treaty Organization in Brussels on Wednesday, cited the military’s ability to strike terrorist targets in far-flung hot spots “in Africa and other places” where few, if any, troops are stationed, apparently referring to drone strikes and commando raids in Somalia, Yemen and Libya in recent years.

“There’s probably not a space on the globe that the United States and its allies can’t reach,” Mr. Austin told reporters.