WASHINGTON — With a cease-fire between Israel and Palestinian militants on the horizon, the Biden administration is now turning to how it can help rebuild the besieged Gaza Strip — and in turn bring pressure, through promises of financial support, on Hamas not to resume fighting.

President Biden had urged Prime Minister Benjamin Netanyahu of Israel to accept a cease-fire, but by the time any halt in fighting takes effect, the violence will have forced more than 72,000 Palestinians from their homes in Gaza, pockets of which are now just piles of rubble where tall buildings once stood.

A senior Biden administration official said the United States was planning to be at the fore of an international response, most likely costing billions of dollars, to include restoring health and education services, and other reconstruction.

The senior official said that rebuilding Gaza — which will most likely be coordinated through the United Nations — was at the top of a list of festering diplomatic obstacles that the administration will face between Israel and the Palestinian Authority once the fighting winds down.

Mr. Biden is expected to consider other initiatives. American diplomats who had shelved the prospects of brokering a broader peace agreement between the two sides will take a new look at the issue of Israeli settlements in the West Bank, said the senior official, who spoke on the condition of anonymity to describe internal discussions. The Biden administration will also refocus on how to build on new alliances between Israel and Arab states that were brokered last year, largely at the behest of President Donald J. Trump.

The administration is also considering how to foster relations and coordination among rival Palestinian political factions in Gaza and the West Bank, as outlined in an analysis co-written in 2018 by Hady Amr, now a deputy assistant secretary of state for Israel and Palestinian issues.

Rebuilding Gaza is a necessary part of the diplomacy — and not only as what some officials see as a moral imperative to help residents. Officials and experts said it was also a point of leverage with Hamas, the militant group that governs the Gaza Strip but has lost popularity among residents who criticize its authoritarian approach and poor administration.

“In a sense, you need to put Hamas in a position where they have to choose between their rockets and the well-being of Gaza,” said Dennis B. Ross, a veteran American negotiator of peace efforts between Israel and the Palestinians and Middle East policy for at least four U.S. presidents.

Last month, before the current unrest, the State Department committed $150 million to the United Nations Relief and Works Agency, which coordinates humanitarian aid for more than 5.7 million Palestinian refugees across the Middle East. The Trump administration had stopped funding the agency in 2018, but Mr. Biden restored it in April.

Elizabeth Campbell, the director of the agency’s office in Washington, said the Biden administration had also previously committed to sending a second installment of aid, also around $150 million, later this summer.

On Wednesday, the agency issued an emergency $38 million appeal to donors to provide food, first aid, mental health assistance and other needs to Palestinians in Gaza and the West Bank. 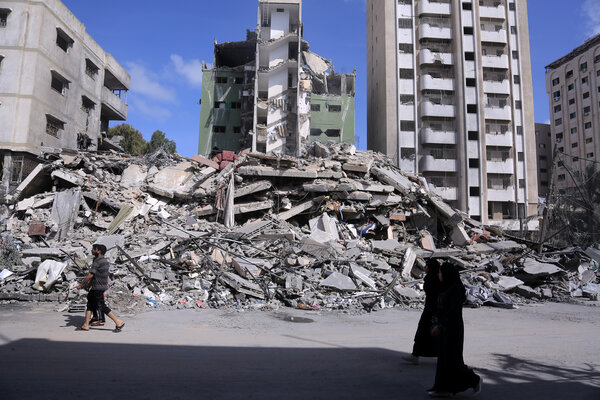 Ms. Campbell said the United States had indicated that it would contribute additional funds for the emergency needs, but it was not yet clear how much.

A longer-term reconstruction effort in Gaza could cost billions of dollars, and administration officials predicted that it would be welcomed by Hamas as it shores up its base of support among residents.

But Mr. Ross noted that international donors would probably be wary without enforceable assurances that any investments would not go to waste — as they all but certainly would if the group later reignited hostilities that would draw a harsh response from Israel.

Similar warnings were posed in 2014, when an eight-week war between Israel and Hamas damaged more than 170,000 homes in Gaza, displacing over a quarter of its population. When a cease-fire was finally declared, the international community created a monitoring system called the Gaza Reconstruction Mechanism to oversee the rebuilding efforts and, importantly, ensure that Hamas was unable to import supplies that could be used as weapons.

A Brookings Institution analysis concluded in 2017 that the reconstruction effort largely failed because of intractable political opposition to Hamas — not only from Israel, but also from Egypt, which opposes the militants’ ties to the Muslim Brotherhood.

Restricted access to Gaza — as enforced by Egypt and an Israeli blockade — limited building supplies, humanitarian assistance and other equipment to the area, the analysis concluded. That fueled already-simmering tensions between Hamas and its political rivals in the Palestinian Authority, whom Egypt was pressuring to take over security operations in Gaza as a way to open access.

At the same time, the analysis found, international donors were slow to send money they had committed to the 2014 rebuilding effort in Gaza. The vast majority of donations that were unfulfilled, three years after the cease-fire, had been pledged by Arab states in the Persian Gulf that also opposed Hamas’s ties to the Muslim Brotherhood. The Muslim Brotherhood has renounced violence but has some links to extremist groups. Hamas is considered a terrorist organization by both Israel and the United States.

Mr. Ross said that the earlier efforts to rebuild Gaza had largely failed and that any future monitoring system, potentially by the United Nations, would need to be an effective, round-the-clock endeavor that would halt reconstruction if Hamas was found to be storing, building or preparing to launch rockets.

“The issue is massive reconstruction for no rockets,” Mr. Ross said. “There has to be enough oversight of this process to know that it’s working the way it’s intended. And the minute you see irregularities, everything stops.”

He said that would not necessarily mean a complete disarming of Hamas, and that some immediate humanitarian aid should be delivered to Gaza. But, Mr. Ross said, the offer for broader reconstruction assistance should be made publicly to assure donors of consequences if Hamas resumes its rocket program. He predicted Hamas would, at least in the beginning, agree to some sort of arrangement. “Right now, the needs are so profound that they will go along with something,” Mr. Ross said.

In addition to the funds provided to the U.N. agency for Palestinian refugees, the Biden administration earlier this spring committed $75 million for economic development programs and $10 million for what was described as peace-building operations in the West Bank and Gaza.

Ms. Campbell noted that the U.N. agency was the main conduit for American assistance to reach Palestinians. “There’s no other office, if you will, for the U.S. to partner with to begin to rebuild” in Gaza, she said.

She warned that using reconstruction assistance as an incentive to compel Hamas to denounce attacks could “hold civilians hostage to a political process.”

“When we look at the human devastation and costs that this new war is causing, it’s just imperative that we receive full funding and full political support for the work that we do,” Ms. Campbell said.