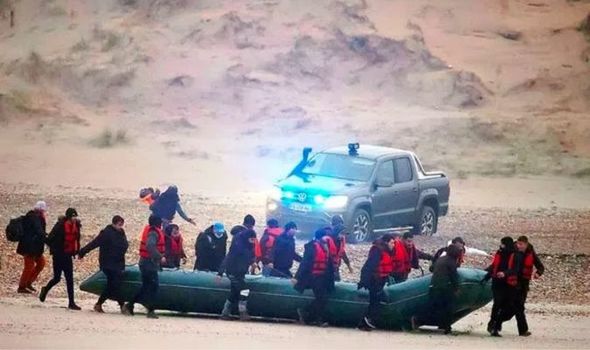 Priti Patel will head to Paris this weekend to thrash out an agreement to smash people trafficking gangs after at least 27 people drowned in the Channel on Wednesday. UK Border Force vessels could also be permitted to patrol waters just off the French coast in the crackdown.

The Home Secretary is planning a border cooperation agreement with ministers and officials from President Emmanuel Macron’s government. Interior ministers from across Europe are also expected to meet in Brussels within days to discuss continent-wide measures to take back control of migration.

After months of refusal to cooperate from President Macron’s administration, the Home Secretary yesterday finally convinced her French counterpart Gerald Darmanin of the need for urgent action in the wake of the “horrendous” tragedy.

At least 27 migrants died when a flimsy boat capsized off Calais after reportedly being hit by a container ship.

A Home Office statement following their phone conversation said: “The ministers underlined the need for deeper co-operation on stopping the Channel crossings, and the need to work closely with European partners.

“The Home Secretary will meet with Minister Darmanin this weekend to further this work and she will send officials and law enforcement officers to Paris tomorrow to intensify joint cooperation and intelligence sharing. Both ministers agreed to remain in touch.”

Ms Patel, yesterday told MPs there was “no quick fix” to the migrant crisis.

In a Commons statement, she confirmed she had proposed joint patrols of the French coast to stop migrants attempting the perilous crossing to the UK.

She said: “I once again reached out and made my offer very clear to France on joint France-UK co-operation and joint patrols to prevent these dangerous journeys from taking place.

“I have offered to work with France to put more officers on the ground and to do absolutely whatever is necessary to secure the area so that vulnerable people do not risk their lives by getting into unseaworthy boats.

“There is a global illegal migration crisis. I have stated many times that these journeys across the Channel are absolutely unnecessary. But, as I have been warning for two years, they are also lethally dangerous.

“What happened was a dreadful shock. It was not a surprise, but it is a reminder of how vulnerable people are put at peril when in the hands of criminal gangs.

“There is no quick fix. This is about addressing long-term pull factors, smashing the criminal gangs that treat human beings as cargo, and tackling supply chains. That requires a co-ordinated international effort.”

Ms Patel confirmed that the ­discussions with her French ­counterpart included sending UK troops and police to France to tackle the problem. Tory backbencher Philip Hollobone asked: “Has she offered Border Force cutters to work close to shore off the French coast in conjunction with the French, and has she offered the deployment of British troops and UK police, if necessary under French command, to operate on French beaches?”

Boris Johnson wrote to President Macron last night to set out a series of proposals for UK and French officials to work together to smash the people smuggling gangs.

Joint patrols of the French shoreline could start as early as next week, the Prime Minister said. He also proposed “immediate work” on a bilateral agreement on ­returning migrants.

The PM ­suggested more hi-tech measures including sensors and airborne ­surveillance drones around French beaches, as well as joint ­intelligence work to give better data on migrant movements.

His letter praised French efforts so far while insisting more must be done to prevent further tragedies.

Mr Johnson said: “If those who reach this country were
swiftly returned, the incentive for people to put their lives in the hands of traffickers would be ­significantly reduced.

“This would be the single biggest step we could take together to reduce the draw to northern France and break the business model of criminal gangs.

“I am confident that by taking these steps and building on our existing cooperation we can address illegal migration and ­prevent more families from ­experiencing the devastating loss we saw yesterday.”

In the Commons yesterday ahead of confirmation of the Home Secretary’s trip to France, Tory MPs warned that President Macron needed to act now to ­prevent further tragedies.

Former Cabinet minister Robert Jenrick said: “It is in the gift of the President of France to bring this to an end now. That will require more action by the French, but it must be in our mutual interests, because the more people cross the Channel, the more people will come to France.”

Speaking during a visit to Croatia, President Macron said: “We are going to ask for extra help from the British because all these men and these women don’t want to stay in France.”

But Calais Mayor Natacha Bouchart yesterday said: “The British Government is to blame. I believe that Boris Johnson has cynically chosen to blame France.”

Pierre-Henri Dumont, the politician representing Calais in the French national assembly, rejected the idea of joint patrols as “crazy”.

Meanwhile, hundreds of people protested outside the Home Office yesterday to condemn UK border policies and to show solidarity
with migrants.

Demonstrators held “no one is illegal” placards and a “refugees welcome” banner as they gathered outside the department’s building in central London to demand an end to Channel deaths.

The tragedy in the Channel represents a savage indictment of criminal greed, political failure and warped ideology.

Direct responsibility for the 27 heartrending deaths lies with the people-smugglers. At an estimated charge of £3,000 per head, these gangsters could have made almost £100,000 out of Wednesday’s ill-fated voyage, undertaken in a boat that was as flimsy as a paddling pool.

Nor has the deadly incident brought any halt in their operations. Even yesterday, as the search continued for bodies, more boats made the illegal crossing to Dover.

Yet the smugglers could not act like this if the politicians and law enforcement agencies on both sides of the Channel had the will to defeat them.

At the Home Office Priti Patel’s habit of over promising and under delivering has become ever more apparent, as in her futile claim last month to be “smashing the economic model of the people smugglers”.

In the same vein, Boris Johnson sternly warned in August 2019 those contemplating the journey: “We will send you back.”

Yet this year, as the influx has already reached a record-breaking 26,000, just five illegal Channel migrants have actually been deported. All too often the Border Force has acted like a quasi-ferry service, even providing hot meals.

Negotiations for the creation of overseas processing centres for asylum applications have gone nowhere. “Fake news” said the Albanian government when asked about a potential deal with Britain.

But to be fair to ministers, they have been working in a climate that is profoundly hostile to border controls, viewing them as an oppressive barrier to greater diversity.

That attitude runs through the civil service, the charitable sector and the media. It can also be found among Left-wing lawyers who use lavish legal aid and the complex appeals process to frustrate removals.

An even bigger problem has been the Paris government. The French have too often behaved like a collaborator with the smugglers. Blood is on Gallic hands. They have allowed the camps to flourish and the dinghies to launch. This week, frail boats set sail in full view of the French police who did nothing to stop them.

Britain has pledged £54million to improve security on the French coast, yet so far this just appears to be money down the drain.

France has even refused to let British police work on its territory, in stark contrast to Poland which has welcomed our soldiers to bolster its border with Belarus.

The rot in France starts at the top in President Emmanuel Macron. With epic cynicism, he is stoking trouble around Calais for two reasons.

First, he sees himself as the keeper of the EU’s federal mission, so he wants to undermine Brexit by making life difficult for the PM.

Second, he is facing re-election in April, so he wants to stir up antagonism by holding our country responsible for the creation of the squalor around Calais. The British supposedly encourage illicit migration through generous benefits, the black economy and lack of identity checks.

This was a theme taken up by the French interior minister Gerard Darmanin who has declared: “We won’t be lectured by the British. We are neither their employees nor their auxiliaries.”

It is no wonder co-operation has been so poor.

Inevitably, the EU has made things worse. Brussels’ obsession with free movement has facilitated not only the smugglers but the transit of economic migrants. The Channel is not unique. There are such crises throughout Europe, from Spain to Greece.

By seeking to destroy nationhood and by treating democracy with contempt, the EU has robbed European civilisation of the willingness to uphold its own integrity.

It can only be hoped that this week’s disaster will lead to a reversal in this stance.