As she was invited to say a few words to her supporters by Donald Trump, the outgoing First Lady said: “Being your First Lady was my greatest honour. Thank you for your love and your support. You will be in my thoughts and prayers. God bless you all, God bless your families and God bless this beautiful nation. Thank you.” Donald Trump added: “What else has to be said, right?”

Republican President Donald Trump left Washington on Wednesday ahead of Joe Biden’s swearing in as the 46th president of the United States on Wednesday, with the Democrat assuming the helm of a country beset by deep political divides and battered by a raging coronavirus pandemic.

Moments before he and Melania boarded the helicopter that took them to Maryland, Donald Trump said: “It’s been a great honour, the honour of a lifetime.

“The greatest people in the world, the greatest home in the world. We’ve had an amazing four years, we accomplished a lot. We love the American people and, again, it’s been something really special.

“I just want to say goodbye but hopefully is not a long-term goodbye, we’ll see each other again. 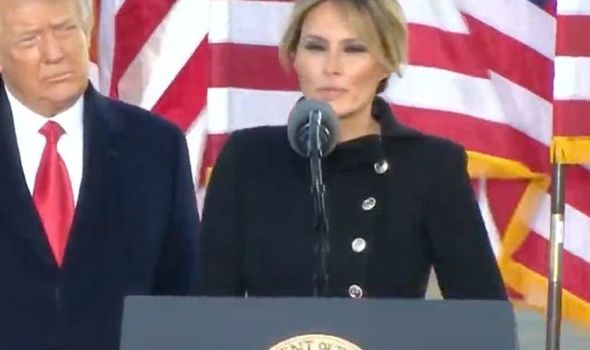 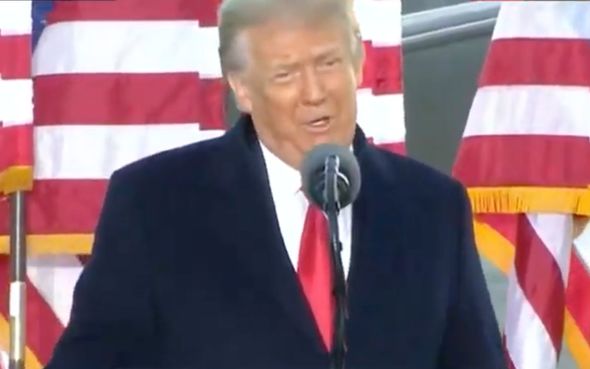 Speaking in Maryland, the outgoing President said: “What we’ve done has been amazing by any standard.

“We took care of the vets, 91 percent approval rating, they never had that before.

“The vets have given us an approval rating like there’s never been before.

“We took care of our vets and our beautiful vets they were very badly treated before we came along.”

He added: “We also got the largest tax cut and reform in the history of our country by far.

“I hope they don’t raise your taxes, but if they do I told you so!”

Joe Biden, 78, will become the oldest US president in history at a scaled-back ceremony in Washington that has been largely stripped of its usual pomp and circumstance, due both to the coronavirus as well as security concerns following the Jan. 6 assault on the US Capitol by Trump supporters.

Trump left the White House for the final time just after 8 am (1300 GMT) by helicopter on his way to a sendoff event at Joint Air Force Base Andrews, although top Republicans, including Vice President Mike Pence, were not expected to see him off.

The president’s refusal to greet his successor before attending the inauguration represents a break with more than a century and a half of political tradition, seen as a way to affirm the peaceful transfer of power.

With only a small number of attendees present, Biden will take the oath of office before US Chief Justice John Roberts just after noon (1700 GMT), placing his hand on an heirloom Bible that has been in the Biden family for more than a century.

DON’T MISS:
Where will Donald Trump live after he leaves office? Inside his estate [INSIGHT]
Joe Biden warned Trump has ‘considerable influence’ & will cast shadow [REACTION]
Joe Biden health: How healthy is the new US president? [ANALYSIS] 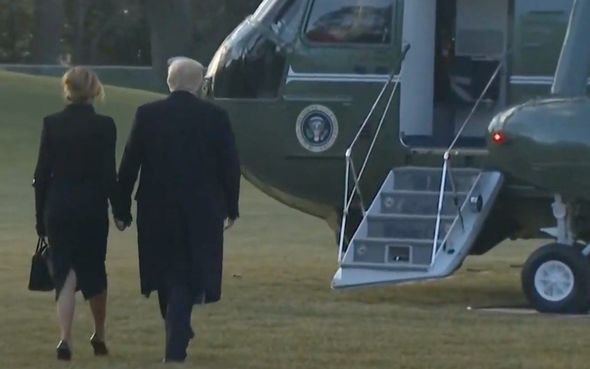 His running mate, Kamala Harris, the daughter of immigrants from Jamaica and India, will become the first Black person, first woman and first Asian American to serve as vice president after she is sworn in by US Supreme Court Justice Sonia Sotomayor, the court’s first Latina member.

The ceremony will unfold in front of a heavily fortified U.S. Capitol, where a mob of Trump supporters stormed the building two weeks ago, enraged by his false claims that November’s election was stolen with millions of fraudulent votes.

The violence prompted the Democratic-controlled US House of Representatives to impeach Trump last week for an unprecedented second time.

Thousands of National Guard troops were called into the city after the siege, which left five people dead and briefly forced lawmakers into hiding. Instead of a throng of supporters, the National Mall will be covered by nearly 200,000 flags and 56 pillars of light meant to represent people from US states and territories.