Home » Politics » What Liz Cheney’s Lopsided Loss Says About the State of the G.O.P.

She hoped Jan. 6 would be a turning point for Republicans. And while it did prove to be a dividing line, it was those who crossed Donald J. Trump who have faced electoral consequences. 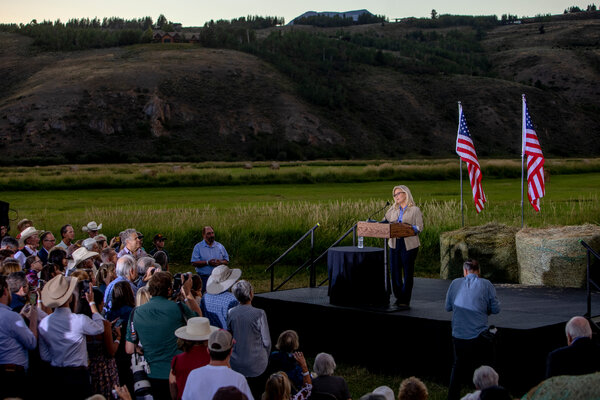 Representative Liz Cheney’s martyr-like quest to stop Donald J. Trump has ensured her place in Republican Party history. But her lopsided defeat in Wyoming on Tuesday also exposed the remarkable degree to which the former president still controls the party’s present — and its near future.

Ten House Republicans voted to impeach Mr. Trump in early 2021 for his role inciting the mob that stormed the Capitol. Only two have survived the 2022 Republican primaries, a breathtaking run of losses and forced retirements in a chamber where incumbents typically prevail with ease.

No single defeat was as freighted with significance as Ms. Cheney’s, or as revealing of the party’s realignment.

The sheer scope of her loss — the daughter of a former vice president was defeated in a landslide — may have only strengthened Mr. Trump’s hand as he asserts his grip over the Republican Party, by revealing the futility among Republican voters of even the most vigorous prosecution of the case against him.

Casting her mission of combating election denialism as a moral imperative and her work as just beginning, Ms. Cheney pledged to “do whatever it takes” to prevent a second Trump presidency. “Freedom must not, cannot and will not die here,” she declared in her concession speech on Tuesday night in Jackson.

Not long ago, Ms. Cheney had been seen as a rising Republican star, even a potential House speaker-in-waiting. Now, after becoming her party’s most dogged Trump detractor — turning the Jan. 6 committee hearings into a bullhorn with which to warn of the dangers Mr. Trump and his enablers posed to the party, the country and even democracy itself — she is soon to be out of her job.

Ms. Cheney had hoped the Jan. 6 riot would be a turning point for Republicans. It did prove to be a dividing line. But it was those who crossed Mr. Trump who have suffered the electoral consequences.

“She may have been fighting for principles,” said Taylor Budowich, a spokesman and adviser to Mr. Trump. “But they are not the principles of the Republican Party.”

Ms. Cheney made clear she was more than willing to lose her House seat, and she hinted broadly at a 2024 presidential campaign of her own, invoking Abraham Lincoln’s failed bids for lesser offices before he sought and won the presidency.

But the outcome in Wyoming showed that while anti-Trump Republicans can count on ample money and media attention, the actual Republican constituency for them is far more limited. Indeed, one of Ms. Cheney’s last gasps was an effort to get Democrats to switch parties to vote in the G.O.P. primary.

Her loss was also the latest sign that the central organizing principles of today’s Republican Party are tethered less to specific policies — she was a reliable vote for much of the Trump agenda — than to whatever Mr. Trump wants at any given time.

Most recently, that has meant lashing out at federal law enforcement authorities over the search of Mr. Trump’s Florida home for missing materials with classified markings. More broadly, it has meant embracing his obsession with denying his 2020 defeat and amplifying his false claims of election fraud, regardless of the bloody fallout nearly 20 months ago or its destabilizing effect on the nation.

More Coverage of the 2022 Midterm Elections

“You could write the history of the modern Republican Party over the last two years, and what does Jan. 6 look like? A hiccup,” said William Kristol, the neoconservative writer who co-founded Republican Voters Against Trump, a group spending millions of dollars to oppose Trump-backed election deniers. “The price of admission to today’s Republican Party is turning a blind eye to Jan. 6.”

That was the experience of Representative Peter Meijer of Michigan, who voted for Mr. Trump’s impeachment weeks after taking office and lost his re-election primary this month. He said his constituents asked him about his impeachment vote 10 times as much as about anything else.

“Policy is not policy toward improving government,” Mr. Meijer explained. “It’s policy as a signifier of whether you’re part of the in group or the out group.”

Refusing to repeat the lie that the 2020 election was stolen, he said, put Mr. Meijer squarely in the “out group.”

“I can’t tell you the number of times somebody said, ‘You don’t have to believe the election is stolen, the important thing isn’t believing it, it’s saying it,’” Mr. Meijer recalled in an interview. “That is what a Republican is supposed to do right now.”

If a series of primary setbacks this spring had showed that Mr. Trump was not invincible, then races in August have showcased his enduring influence.

Representative Jaime Herrera Beutler of Washington State, another Republican vote for impeachment, was ousted by a Trump supporter. A Trump-backed candidate, Tim Michels, who has entertained trying to overturn the 2020 election, won the Republican nomination for governor of Wisconsin. And Mr. Trump’s preferred candidates swept the nominations in Arizona for Senate, governor, attorney general and secretary of state. All embraced his election denialism.