On a visit to a vaccine manufacturing plant in Michigan, President Biden said the nation could be “approaching normalcy” by the end of the year, but said new virus variants could slow progress. 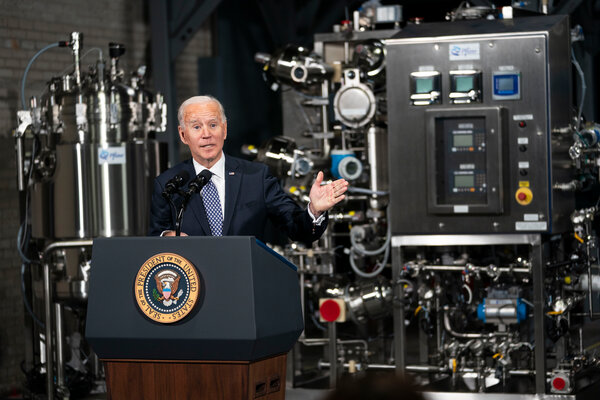 WASHINGTON — President Biden, on a visit to Pfizer’s coronavirus vaccine plant in Kalamazoo, Mich., said on Friday that the nation could be “approaching normalcy” by the end of the year, but cautioned that new virus variants and potential vaccine production problems could slow progress.

“God willing, this Christmas will be different than last, but I can’t make that commitment to you,” Mr. Biden said. “I can’t give you a date when this crisis will end, but I can tell you we are doing everything possible to have that day come sooner rather than later.”

His appeal for patience came hours after the White House issued a plea to local officials to quickly work through six million vaccine doses that have stacked up during winter storms, which delayed appointments and forced vaccine sites to temporarily shutter throughout the nation.

Andy Slavitt, a White House pandemic adviser, said at a news conference Friday morning that those doses represented about three days’ worth of shipping delays, and that states had made up for some of the backlog with existing stock. Of the six million doses, 1.4 million were already in transit on Friday, he said, and the rest were expected to be delivered in the next week.

“We’re asking vaccine administration sites to extend their hours even further and offer additional appointments and to try to reschedule the vaccinations over the coming days and weeks as significantly more supply arrives,” Mr. Slavitt said.

The delay was a sign of how interconnected the nation’s vaccine distribution network is, vulnerable to substantial interruptions because of extreme weather. Mr. Slavitt said that FedEx, U.P.S. and McKesson — the drug distribution giant that manages Moderna’s vaccine — had been impeded, with workers snowed in and unable to package and ship vaccines, including the supplies that go with them.

FedEx and U.P.S., which have vaccine shipping hubs in Memphis and Louisville, Ky., would make Saturday deliveries this week, he said.