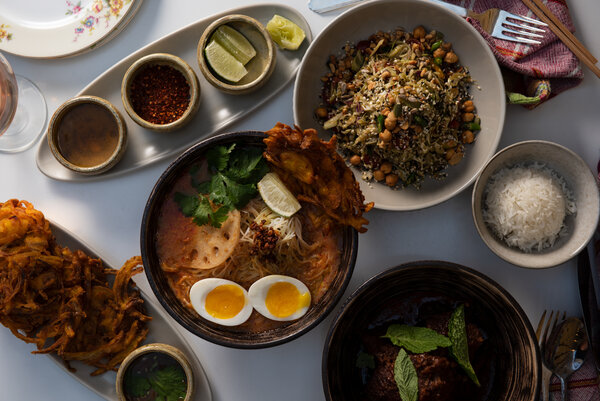 Rangoon, a Burmese restaurant that opened in Brooklyn this year just in time for the pandemic, is not precisely the place that its owners, Myo Moe and Daniel Bendjy, envisioned. Still, you should go.

Ms. Moe, the chef, would build her plates with more contrast and complexity if the world weren’t upside down. The rice noodles she serves in a spicy, salty, dark sauce of fermented black beans should be fatter, she says, but supply disruptions have forced her to settle for a narrower gauge. Try them anyway, along with the tea-leaf salad, even though the lotus root it should contain isn’t always available.

Takeout and delivery have kept Rangoon afloat since March, when the restaurant had to close its dining room while it was still in soft-opening mode. A number of dishes have been stripped down, made simpler and sturdier so they can be packed in disposable containers. Order them nevertheless.

For those whose mind wanders during Zoom meetings to thoughts of getting lost in the scent of lemongrass rising from the steam on a bowl of mohinga, the city can be a frustrating place, seemingly incapable of sustaining more than one or two Burmese restaurants at a time. The scarcity of the cuisine alone should make Rangoon a compelling destination, but it would be an exciting one even if tea-leaf salad were as common here as Jamaican beef patties.

Ms. Moe, who grew up in Myanmar, interprets the country’s cuisine with a blend of fidelity and freedom that seems new to the city. She doesn’t turn the knobs all the way up on fermented flavors, chile heat, pork fat and other intensifiers in an effort to to be heard over New York’s background noise, the way some chefs do. Instead she emphasizes the subtlety and freshness that Burmese cooks prize. Her ingredients demand attention — the rich, marbled pork shoulder she stews with tamarind pulp is one of the nicest pieces of meat I’ve had in a restaurant this year — and her seasonings repay it.

Ms. Moe and Mr. Bendjy, working with a Brooklyn architecture firm called Outpost, spent months transforming the dark shell of a defunct bodega into a minimalist white dining room. Early in the evening, pink light sifts in through a facade of hinged white metal panels perforated with a design taken from Victorian wallpaper. On the walls are old tinted photographs of Ms. Moe’s family in Myanmar, taken long before she and her parents emigrated from Yangon in 1992. Tables and counters are notched into corners and nooks of the compact space.

You won’t sit there. Even after Sept. 30, when they will be allowed to open their dining room again, Ms. Moe and Mr. Bendjy are going to keep seating everybody who comes to Rangoon in the back garden or out front, where a small street-dining platform built under the arching canopy of trees on a wide, stately block of Prospect Heights tries gamely to mirror the design of the interior: It’s painted white, set with a white table and chairs, and surrounded by planter boxes that are filled with white chrysanthemums. 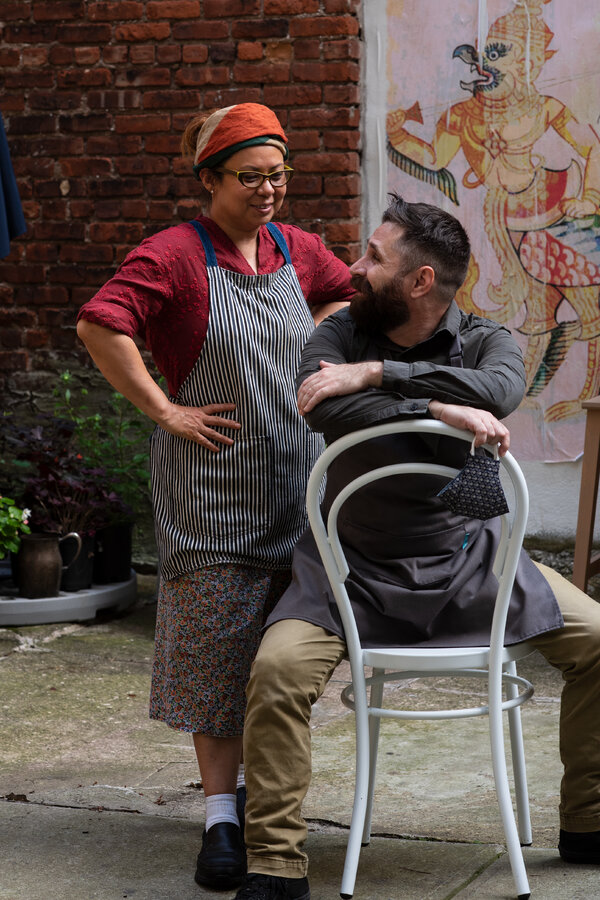 Outdoor dining and takeout have kept many New York City restaurants alive, but they have had a leveling effect. Kitchens, most of them understaffed, have had to ditch complicated ideas in favor of simple ones. Restaurants that tried to fine-tune each nuance of the dining experience — lighting, music, pacing, seating arrangements — have had to surrender to the street. How much nuance can you inject into dinner when all your customers are wearing shorts, drinking out of plastic cups and watching the local dogs relieve themselves on the block association’s begonias?

Still, some places have managed to stand out even after their high points were ground down and their more elaborate notions were tossed out like old phone books. Rangoon is one.

Rangoon has a more concise menu than either of those restaurants did. If you order, say, the salad of cold shrimp and mango in a lime-fish sauce vinaigrette, you may perceive traces of Ms. Moe’s training at Mercer Kitchen and other New York restaurants. More recently and pertinently, she ran a floating Burmese kitchen out of a coffee shop in Queens and then a bar in Brooklyn. She called it Rangoon NoodleLab. Although noodles weren’t all she cooked, they were a major attraction, as they are now in her own restaurant.

At Rangoon, you can get mondi thoke, the chilled noodle salad from Mandalay in which the vermicelli are not so much seasoned as fortified by a grainy coating of toasted chickpea powder; it clings to the noodles like grated Parmesan, and like Parmesan it deepens the flavor of the dish. The hot and spicy noodles in fermented black-bean sauce, the ones that Ms. Moe says are supposed to be a size or two wider, are called mee shay khaut swe, and they are a slippery, savory pleasure to eat.

Most alluring of all is the mohinga. Ms. Moe’s version of this quintessentially Burmese noodle soup is impressively focused, its bright, fresh-fish stock amplified by turmeric and lemongrass. It achieves maximum power, and provides the greatest lift to its bundle of soft rice noodles, once the garnishes on the side are stirred in: roasted chile flakes (to taste, keeping in mind that mind-altering levels of spice are rare in Burmese food) and fish sauce (the more the better). The other components of Rangoon’s mohinga, though, recede before the majesty of its latticelike onion fritter, which looms half above and half below the broth, mahogany brown and crisp outside, turmeric-gold and soft inside.

You may find yourself visualizing this item in your more distracted hours, and then making plans to order it on a return trip as an appetizer, where it comes with a tamarind-garlic dipping sauce. You will get three to an order. This will partly make up for their being noticeably smaller than the single fritter served with the soup.

Or you may find that your mouth craves the unusual, tactile, mildly tingly sensation produced by the fermented tea leaves in lahpet thoke. Ms. Moe makes her lahpet thoke with shredded cabbage and green tomatoes, sweet and fresh next to the tangy and bitter tea leaves, then buries it all under so many toasted nuts and seeds that it looks like a grain bowl from an all-day cafe in Bushwick. Once you’ve made your way through them, it becomes hard to imagine wanting a tea leaf salad that isn’t crunchy.

The few curries Ms. Moe prepares are not especially hot, but they are highly aromatic; they call to mind the curries of Myanmar’s western neighbor, India, more than those of Thailand, across its southeastern border. In the one called kitt thar hinn, stewed chicken thighs and potatoes are seasoned with a garam masala that contains noticeable amounts of cinnamon and clove; wett thar hinn combines tender pork shoulder with a tamarind-garlic-ginger sauce.

The summer of 2020 will not go down as a great one for desserts (or pastry chefs, whose services many restaurants, watching their pennies, have chosen to forgo). For now, Rangoon has only one, a coconut-tapioca pudding in a cut-glass coupe. If Rangoon survives the pandemic, Ms. Moe will probably bring on another dessert or two to augment this one. Try it anyway.