Home » World News » A Miami Market Where the Fish Fly

MIAMI — Customers traveling by foot or convertible will hear Plaza Seafood Market shortly after it comes into view. The rhythmic thud of long, heavy knives cracking fish spines, landing hard on a cutting board, grows louder when you reach the parking lot, provided there are no motorcycles revving nearby, drowning everything else out.

The sounds of half-shouted Spanish, car horns and crushed ice being shoveled over mutton snapper mingle with the chopping after you enter the compact, one-room market. It’s on a stretch of Miami’s Allapattah neighborhood known as Little Santo Domingo, where fish cutters have been butchering whole fish for home cooks at Plaza Seafood since the early 1990s.

Today, when so many of the city’s food businesses are hamstrung by closings and restrictions related to the coronavirus, the market is busier than ever, seven days a week, as it continues to foster community around fresh seafood. Though it’s housed in a low building, with face masks and social distance required, breezes blow through the many doors and windows, and much of the business transpires outside. 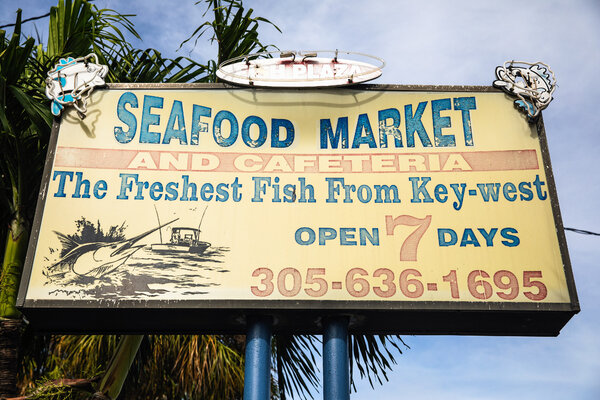 On the first Saturday of 2021, the scene at the market was a reminder that no matter where you are in Miami, the ocean is never far away. Five fish cutters worked alongside one another, gutting, scaling and filleting just-purchased seafood, from 10-inch bream to burly grouper and hog snapper longer than an adult’s arm.

They included Natalia Solarzano (above right), an eight-year veteran of the market. She accepted trays of fish and cutting instructions from customers through a corner window installed last summer, to help relieve traffic inside the market. For much of the day, Ms. Solarzano was stationed next to Alex Lima (below), their shirts flecked with fish scales. 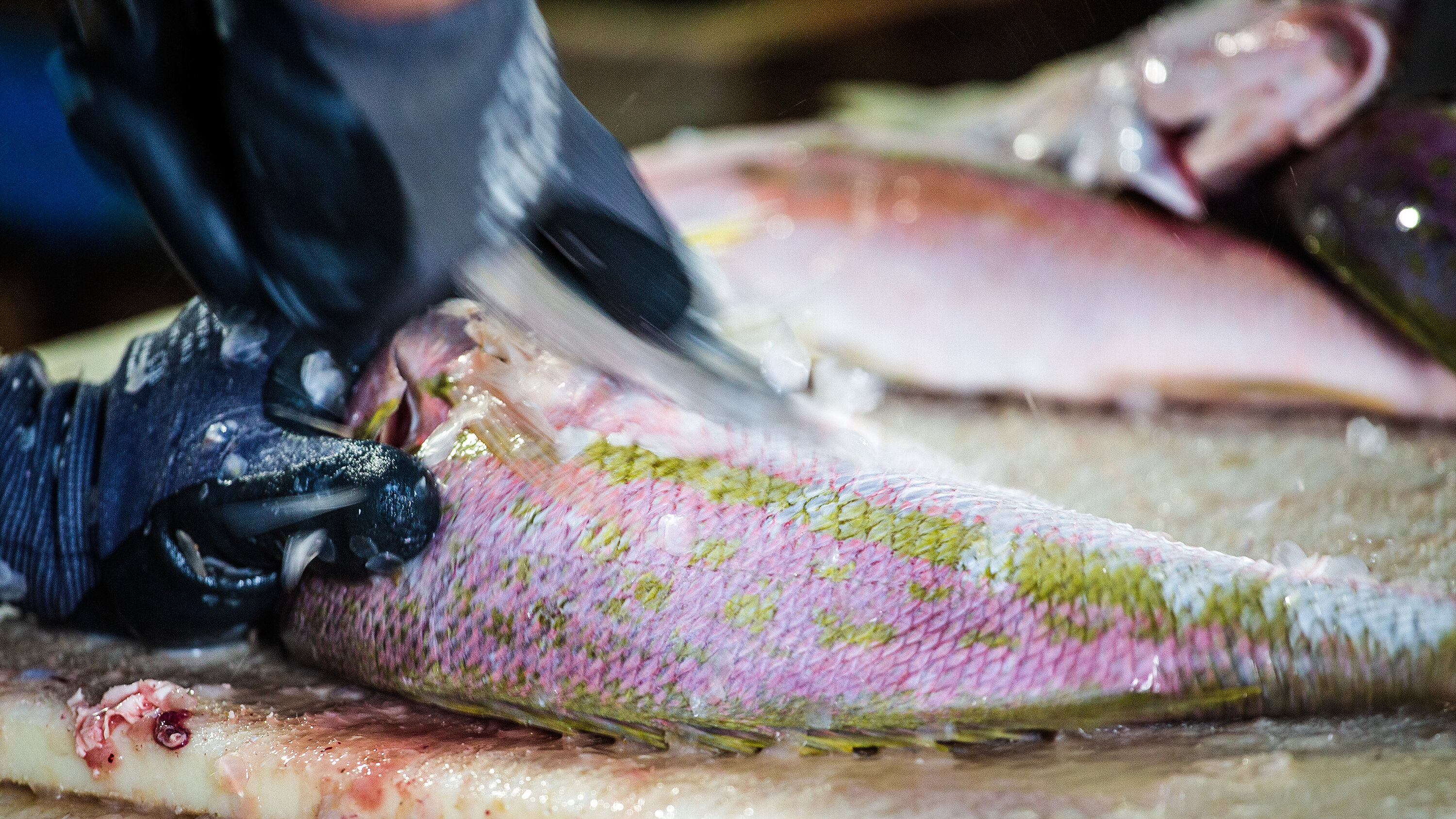 One customer, Arnita Pace (above right), drove that morning from her home about a half-hour north of Plaza Seafood. “My sisters come here, everyone comes here,” said Ms. Pace, a Miami native. “Everything is fresh. The fishes’ eyes look good. I know I’m guaranteed to get what I want.” On this day, that included yellowtail snapper (second from top), live blue crabs and Gulf shrimp.

Ms. Pace, 57, has been shopping at the market since it first opened. Wendy Liu and Yang Zhao (above left), who followed Ms. Pace through the plastic curtain that covers Plaza’s front door, were first-time customers. They were on vacation in Miami, and found the market through an internet search.

Ms. Liu and Mr. Zhao, who were both born 30 years ago in China, put on disposable plastic gloves to browse the seafood displayed on tables along two walls inside the market. They looked forward to dinner that night at their home in Orlando: grilled lobster tails, along with shrimp and bream steamed in soy sauce and garlic.

Adrian Pitaluga (above), 21, weighed purchases on scales next to the cash register, where customers pay for their seafood before bringing it to the cutters. He said conch, mainly from Turks and Caicos and the Bahamas, is Plaza’s best seller; most of the other seafood comes from the Florida Keys or Mexico. Yellowtail (below) is the most popular finfish.

“They just fly out of here,” he said. 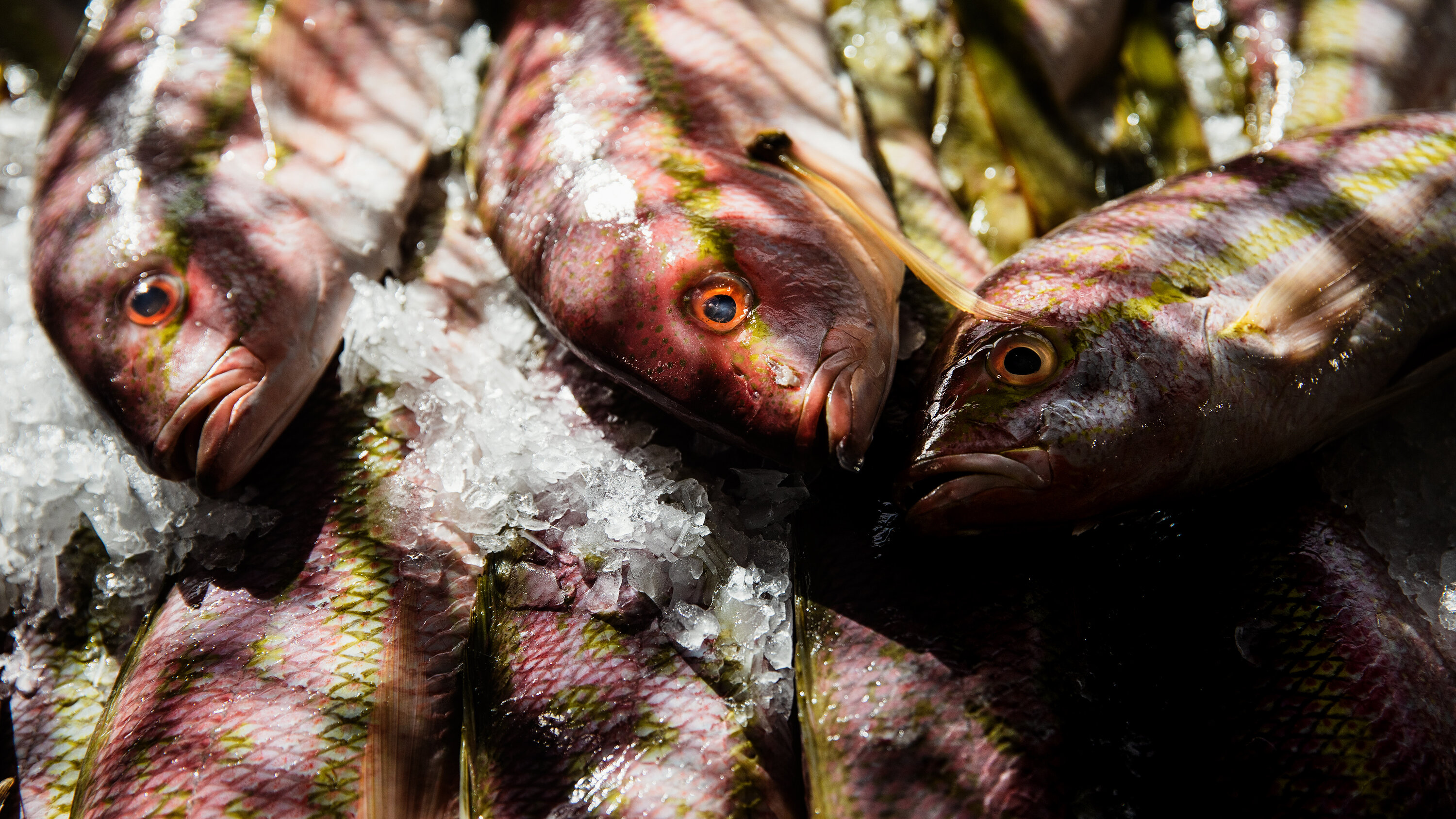 Mr. Pitaluga’s father, John Pitaluga, bought Plaza from its original owner with his business partner, Abel Gault, in 2000. The business, which includes a small outdoor cafe, is a bare-bones version of the Cuban-American seafood market and restaurant hybrids found across the Miami area. (Garcia’s, on the Miami River, and La Camaronera, in Little Havana, are notable examples.)

Plaza’s food — fried whole fish, conch soup, seafood empanadas — is similar to what the elder Mr. Pitaluga remembers eating growing up in Havana, before his family moved to Hialeah Gardens, north of Miami, in the 1980s. 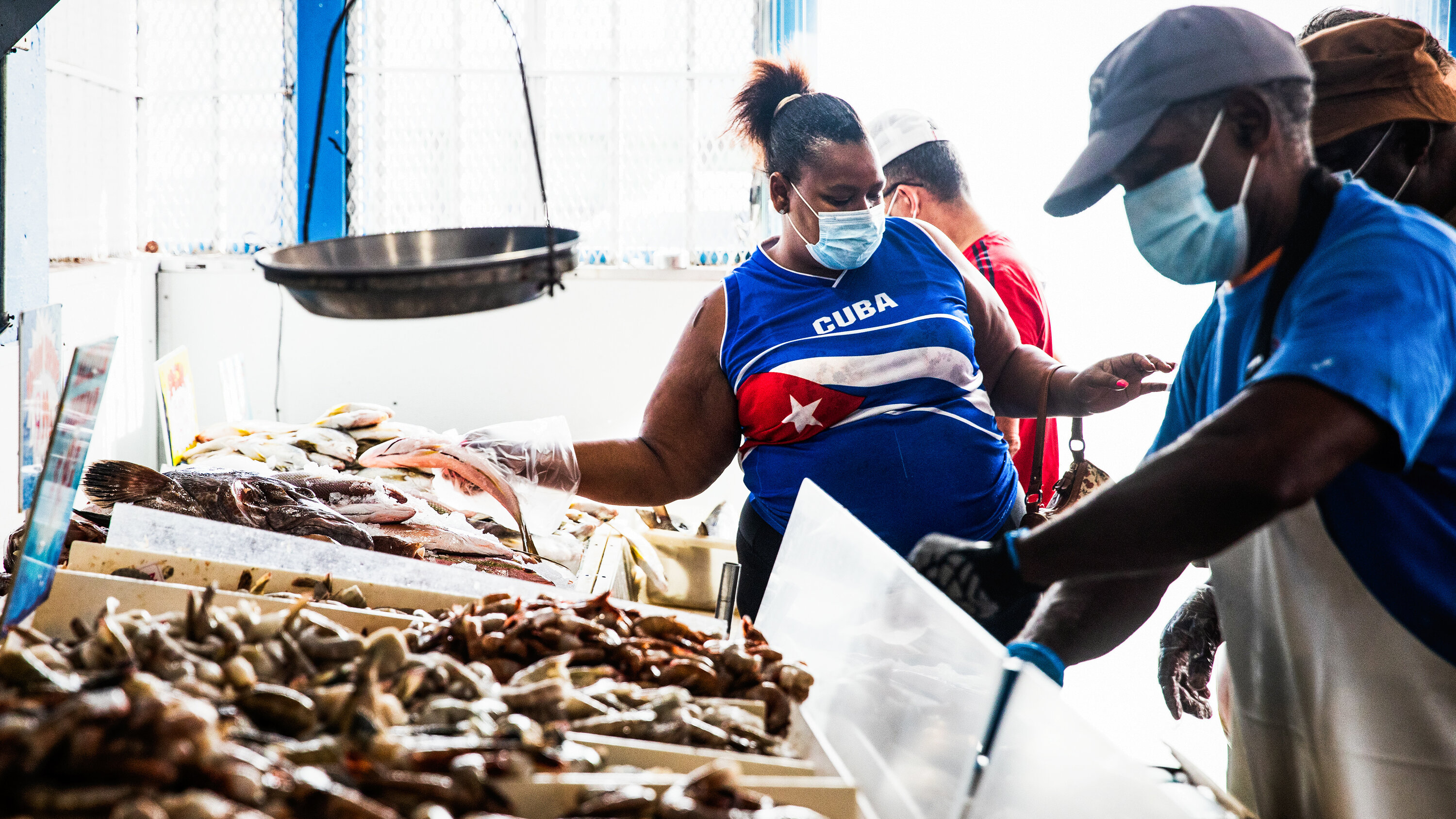 Little Santo Domingo feels far removed from the glass towers of downtown Miami, the jet-setting tourists of Miami Beach and the gated mansions of Coral Gables. The neighborhood is home to large populations of immigrants from Central America and the Dominican Republic, along with African-Americans, many displaced from elsewhere in Miami, said Robin Bachin, an associate professor of history at the University of Miami.

On the streets around Plaza Seafood, parents called after children through open windows. Mechanics fired up power tools. Tall men gathered around a short table beneath a carport, playing dominoes in the shade.

Mileyka Burgos-Flores said Plaza Seafood represents a part of the culture that is fading from the Allapattah neighborhood, which in recent years has started to gentrify. “The beauty of Allapattah is that for decades it’s been a starting spot, where you can find cheap rent to start out in Miami,” said Ms. Burgos-Flores, the executive director of the Allapattah Collaborative, CDC, a sustainable community-development organization.

Miami’s diversity is still reflected in the market’s clientele, and in the meals they create with their purchases. Carline Saintilmond (above left), who is from Haiti, bought shellfish for a seafood boil, along with red snapper and grouper. She loaded it all into the trunk of her car with her niece, Katheryne Simonis, who was visiting from Orlando.

“Haitians, the way we cook seafood is different,” said Ms. Saintilmond, 47. “We use lemon. We use salt and we use vinegar, red bell peppers, garlic, onion, green onion, parsley, hot peppers, thyme. We blend all of that together in our seafood with sour oranges, let it sit like that before frying. We like our flavor.”

Eccleston Aitcheson (above center) was visiting the market for the fourth day in a row, along with his sons, Angelo (left) and Michael (right). Mr. Aitcheson is from Jamaica and raised his family in Miami. His father, Talmon Aitcheson, died on Dec. 30, a day shy of his 97th birthday.

“We’re celebrating his life,” he said.

The Aitchesons bought king snapper and yellowtail for Jamaican escovitch, one of Talmon’s favorites. “We’ll probably come here six or seven more times,” said Angelo, whose grandfather urged his family to eat seafood in his honor. “With all this cooking, our hands are going to be blistered.”