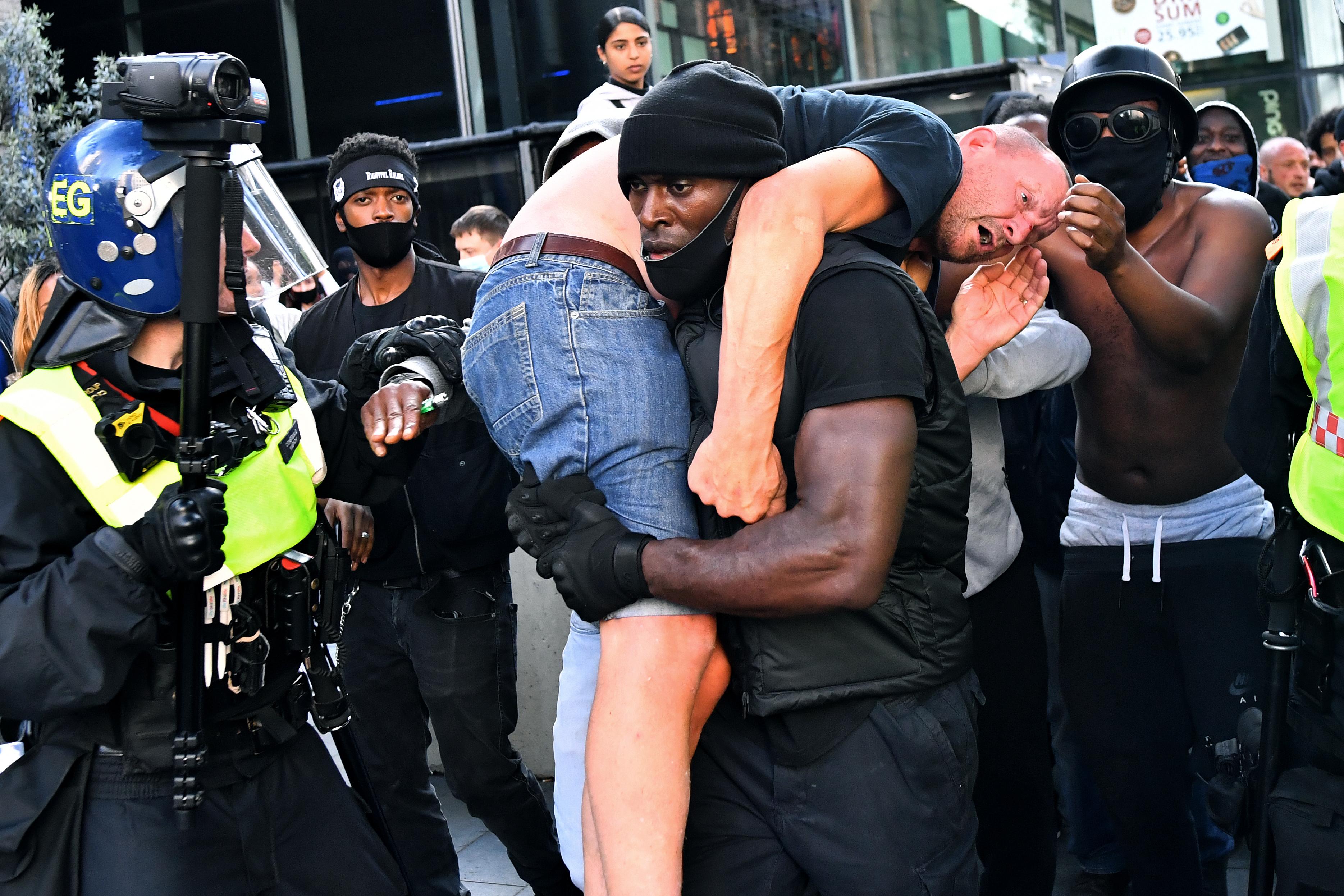 Reuters photographer Dylan Martinez heard the words ring out during chaotic scenes in London on Saturday, when mostly peaceful anti-racist demonstrations turned into violent scuffles with counter-protesters in the area.

Then he saw the man who had uttered them – a black protester emerging from the melee carrying an injured white man in a ‘fireman’s lift’ over his shoulder.

The picture he took has gone viral on social media and featured in news bulletins, capturing a moment of high drama that jars with the broader narrative – of anti-racist and far-right protesters fighting each other.

“I saw a skirmish and someone falling to the ground,” Martinez recalled of the moment near Waterloo Bridge, in central London, as he covered anti-racism protests that have flared up in the city.

The two men then appeared through the crowd.

“The crowd parted right in front of me. I was in the right place at right time, and incredibly lucky from that point of view. He came towards me walking briskly.”

Martinez said the man being carried had injuries to his face, and Reuters journalists at the scene said he had been beaten in a skirmish with anti-racism protesters.

Some people in the crowd shouted out that the assault victim was a member of the far-right.

Reuters was not able to identify the victim or his political leanings. Police said they were aware of the incident and the photograph, but made no further comment when Reuters asked for details of the men’s identity and what happened.

Protests have erupted across British cities and around the world after a black man, George Floyd, died in police custody in Minneapolis on May 25.

In some cases they have sparked counter-demonstrations by people who do not agree with all of their aims and methods, and these have included people from far-right groups.

British media identified the black man as Patrick Hutchinson, a personal trainer. On his social media account, he wrote: “We saved a life today”.

Reuters spoke to the partner of Hutchinson’s best friend, who confirmed it was him. Hutchinson did not reply to calls to his mobile phone.

He told British Channel 4 News on Sunday it was a “scary” scene. “It was pretty hectic, it was almost like a stampede.

“…The guys went in there, they sort of put a little cordon around him to stop him receiving any more physical harm. His life was under threat.

“So I just went under, scooped him up and put him on my shoulders and sort of started marching towards the police with him whilst all the guys were surrounding me and protecting me and the guy I had on my shoulder.”

In a statement on Sunday police said 113 people had been arrested over the weekend and 23 officers were injured in the violence, none of them seriously.

The reaction on social media to the picture and events it portrayed has been largely positive.

“Amid all the ugliness, a beautiful moment of humanity,” wrote British journalist Piers Morgan in a Tweet accompanying the photograph.

Martinez, a veteran photographer who is Reuters’ picture editor for the United Kingdom and Ireland, said the protests in London on Saturday had been fluid and unpredictable. 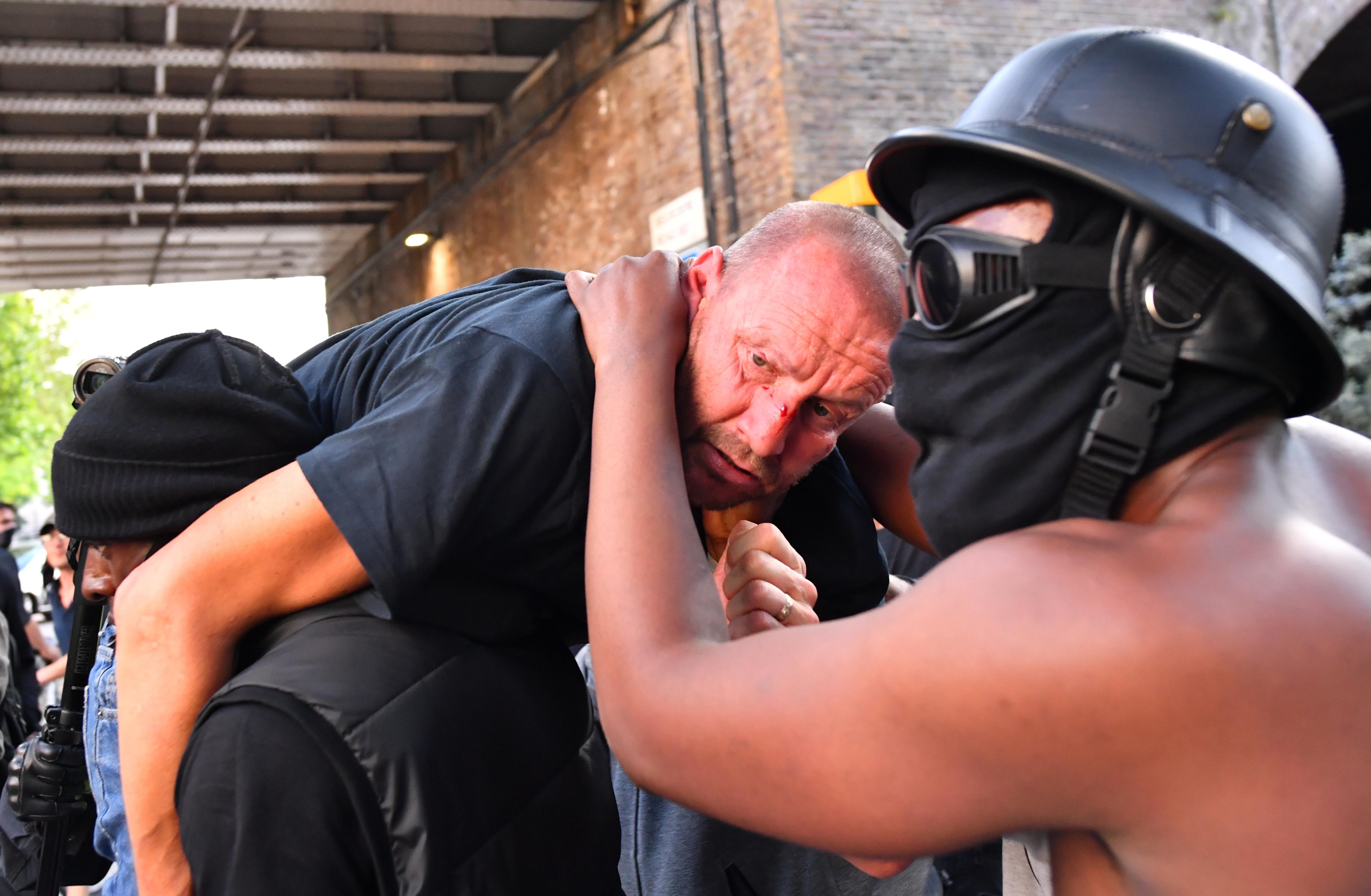 After witnessing sporadic, minor clashes between demonstrators and police in Trafalgar Square, Martinez said he switched attention to nearby Waterloo Bridge, where several hundred anti-racism protesters had gathered.

“They took over the whole of the bridge,” he said. “There was a traffic jam going from south to north, but the vibe was good – cars were honking and people were celebrating.”

The mood quickly turned ugly when they encountered a group of counter-protesters and clashes broke out, Martinez said.