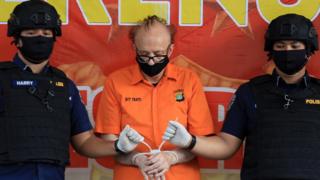 A French man accused of molesting hundreds of children in Indonesia has died in a suspected suicide, police say.

Francois Camille Abello, 65, was found unresponsive in his cell at a detention centre in the capital, Jakarta, last Thursday, said spokesman Yusri Yunus.

Mr Abello was pronounced dead on Sunday night after three days of treatment.

The retiree was arrested last month at a Jakarta hotel. Police said he was in a room with two underage girls.

They said videos were found on Mr Abello’s computer that showed him engaging in illegal sexual acts with more than 300 children aged between 10 and 17.

Umar Shahab, an official at the National Police Hospital in Jakarta, said on Monday that Mr Abello had sustained a neck fracture that blocked his oxygen supply.

Mr Yunus said that guards at the detention centre had been questioned and the cell examined as part of an investigation into the death.

According to police, Mr Abello was believed to have targeted street children, luring them with offers of money to photograph them in his hotel room before making sexual advances. Those who refused were beaten, the police said.

He was facing life in prison, chemical castration, or possibly the death penalty, if convicted.