Home » World News » Afghanistan: The weapons left behind to the Taliban and what it means for the countrys future

American military planes left the tarmac at Kabul’s Hamid Karzai International Airport for the final time on Monday, marking the end of 20 years of US military presence in Afghanistan.

Observers from abroad watched in shock as videos of the group’s leaders inspecting fighter planes and helicopters left behind by the Americans spread on social media.

It follows countless videos in recent months as the Taliban swept across Afghanistan and their fighters claimed huge caches of weapons while the Afghan army fled.

The US military says that some of its equipment was disabled, while satellite images have shown Afghan aircraft stationed across the border in Uzbekistan.

So what weaponry could the Taliban have acquired after the US’ exit and what does that mean for the future of Afghanistan? 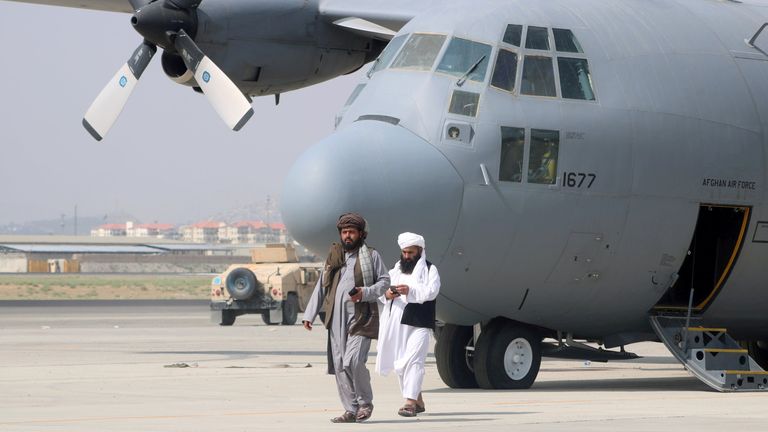 “Congratulations to Afghanistan… this victory belongs to us all.”

These were the words of Taliban spokesperson Zabihullah Mujahid as he stood triumphantly on the tarmac at Kabul airport on Tuesday morning.

Behind him was a C-130H transporter plane, left there by American forces.

Elsewhere, images show Taliban special forces inspecting four CH-46 Sea Knight helicopters, thought to be the same ones used to transport US embassy staff to the airstrip as the Taliban descended upon Kabul just a matter of weeks ago. As well as MD-530 helicopters. 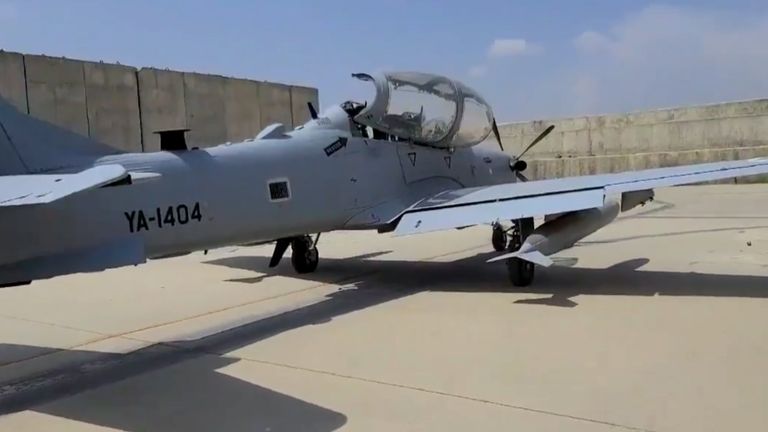 The Afghan Air Force (AAF) had 167 aircraft in the country at the end of June, according to a report published by the US-based Special Inspector General for Afghanistan Reconstruction (SIGAR).

These included 33 light attack planes: A-29s and AC208s. These are fixed-wing aircraft designed to carry out strikes against targets. 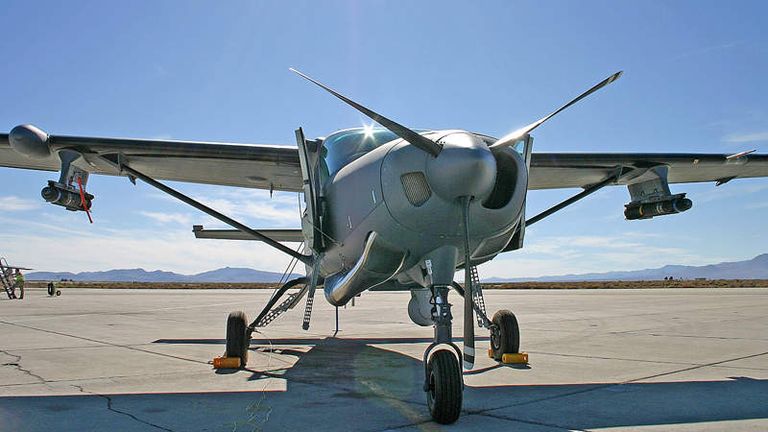 Most of the AAF’s fleet are helicopters, also known as “rotary wing aircraft”.

The MI-17 is used primarily for transportation purposes, whereas the MD-530 is an attack helicopter.

Perhaps the most recognisable aircraft in the AAF’s arsenal is the UH-60 Blackhawk helicopter. Thirty-three of these infamous attack helicopters were in Afghanistan and operational at the end of June 2021.

The US Army has spent nearly $1.8bn on building, equipping and sustaining the Afghan Air Force since 2019.

But what at first glance might look like a treasure trove of expensive kit seamlessly handed over to the Taliban may not be entirely what it seems.

The US Head of Central Command said on Tuesday that all 73 aircraft left at Kabul airport were made unusable before the US military left.

Open-source researchers at the Oryx blog have counted 25 disabled aircraft and 39 disabled helicopters in the footage coming out of Kabul airport since Monday.

Elsewhere, satellite images of an airstrip in neighbouring Uzbekistan indicate that some of the former AAF fleet are now outside Afghanistan. 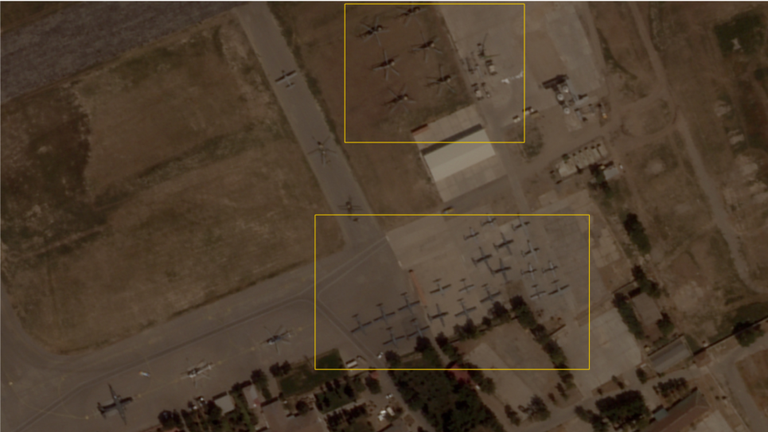 These images, first analysed by the Washington DC based Centre for International and Strategic Studies, show up to 46 Afghan Air Force aircraft at Termez airport in neighbouring Uzbekistan.

The Uzbek authorities later confirmed that 22 military planes and 24 helicopters had landed in the country.

There were also reports that several military planes carrying over 100 Afghan soldiers had landed in Tajikistan.

Despite this, there is evidence that the Taliban has gained access to operational aircraft.

A series of recent videos appear to show Taliban fighters flying at least one UH-60 Blackhawk helicopter in Kandahar.

We see the helicopter flying a Taliban flag over a parade of flag-waving, weapon-bearing Taliban fighters in armoured vehicles.

An earlier video, shared online in mid-August and verified by Christian Triebert of the New York Times, shows the Taliban flying an MI-17 near the airport in Herat in the west of Afghanistan.

So while the Taliban may not have access to everything the Afghan Air Force once had, it’s clear that some aircraft have been repurposed by the group.

And experts are worried that even one helicopter could dramatically increase the Taliban’s capacity to inflict violence on communities they have targeted in the past.

“I think what alarms a lot of Afghans now is the potential that you have a Black Hawk helicopter being brought to bear on a village, essentially, say, of Hazaras, a community that they targeted in the 1990s in acts of violence that Hazaras regard as genocide,” said Professor Robert Crews of Stanford University.

“Their capacity to rule Afghanistan more completely in a more brutal way is a major concern.”

Professor Crews also outlined the impact that aircraft may have on any potential uprising against the Taliban, such as the small but growing resistance movement in the Panjshir valley.

“The capacity for urban action is very much curbed by the arrival of potentially a single helicopter,” he said.

Sky News’ Special Correspondent Alex Crawford visited the country back in July and was shown a haul of 70 sniper rifles, 900 guns, 30 Humvees, 20 army pickups and 15 articulated military trucks by Taliban fighters who had captured the booty in Wardak province, west of Kabul. 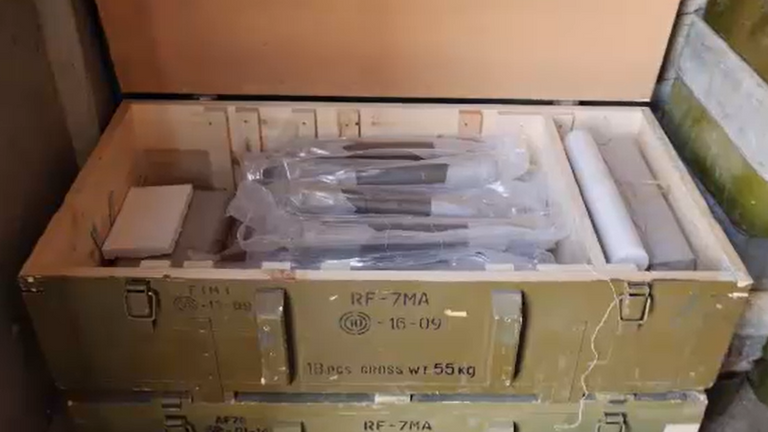 Thousands of armoured vehicles, including Humvees, are now expected to be in Taliban hands.

The prevalence of these vehicles, as well as high-spec US military gear worn by Taliban special forces, bolsters the Taliban’s military capabilities as well as their reputation within Afghanistan, according to Prof Crews.

“The ones we saw on the tarmac in Kabul yesterday, wearing the American uniforms, looking very much like any other modern special forces units, with the radio, with night vision goggles, with all the symbols of modern power,” he said. 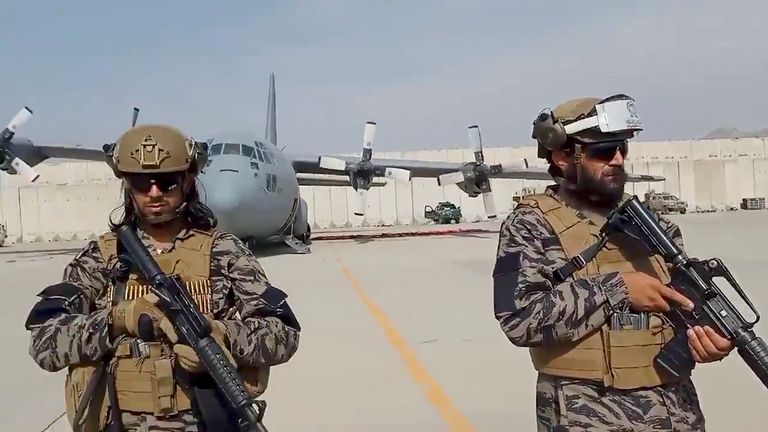 “Those, I think, are quite intimidating for any actor who would emerge from Afghan territory to attempt to challenge them.”

Human rights groups are becoming increasingly concerned about a different type of weapon that could be used by the Taliban against Afghans: data.

Vast caches of personal information, including biometric data, is thought to now be accessible to the group on devices left behind by the US military.

The Data and Forensic Unit looked into the different types of data that could now be in Taliban hands in an article published last week.

The Pentagon has said that they do not have an inventory of the equipment left behind by US forces.

And as footage of Taliban fighters in helicopters and armoured vehicles continues to emerge, the true cost of leaving things behind remains to be seen.

The Data and Forensics team is a multi-skilled unit dedicated to providing transparent journalism from Sky News. We gather, analyse and visualise data to tell data-driven stories. We combine traditional reporting skills with advanced analysis of satellite images, social media and other open source information. Through multimedia storytelling we aim to better explain the world while also showing how our journalism is done.