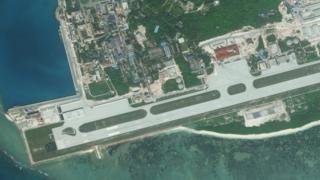 Australia has formally rejected China’s territorial and maritime claims in the South China Sea, aligning itself more closely with the US as tensions rise.

In a declaration to the United Nations, Australia said the claims, which take in the majority of the sea, had “no legal basis”. China has not reacted.

It comes after the US called some of China’s actions in the area “unlawful”.

In recent years China has built bases on artificial islands in the sea, saying its rights go back centuries.

Brunei, Malaysia, the Philippines, Taiwan and Vietnam contest China’s claims. The countries have wrangled over territory for decades but tensions have steadily increased in recent years, with several maritime confrontations taking place.

Beijing claims a vast area known as the “nine-dash line” and has backed its claims with island-building and patrols. It has built significant military infrastructure, although it insists its intentions are peaceful.

Although largely uninhabited, two island chains in the area – the Paracels and the Spratlys – may have reserves of natural resources around them. The sea is also a key shipping route and has major fishing grounds.

In 2016, an international tribunal ruled against China, saying there was no evidence it had historically exercised exclusive control over the sea’s waters or resources. But China rejected the judgment.

What is Australia’s position?

Australia’s declaration to the UN, submitted on Thursday, reads: “Australia rejects China’s claim to ‘historic rights’ or ‘maritime rights and interests’ as established in the ‘long course of historical practice’ in the South China Sea.”

The text references the 2016 ruling by the Permanent Court of Arbitration, adding: “There is no legal basis for China to draw straight baselines connecting the outermost points of maritime features or ‘island groups’ in the South China Sea.”

It also said it did not accept Beijing’s assertion that its sovereignty over the Paracels and the Spratlys was “widely recognised by the international community”, citing objections from Vietnam and the Philippines.

Analysts say the declaration marks a dramatic shift in position for Australia, which has previously urged all claimants to resolve their disputes in accordance with international law.

The move comes amid deteriorating relations between Australia and China over a number of issues, including an Australian call for a global investigation into the origins of Covid-19, which first emerged in the Chinese city of Wuhan last year.

The text was issued ahead of annual talks between Australia and the US due to take place in Washington on Tuesday. The two countries are close and long-standing allies.

What is the US position?

The US has long been critical of China’s militarisation of the region, and the Trump administration has recently reversed a policy of not taking sides, explicitly backing the territorial claims of China’s South East Asian neighbours.

US Secretary of State Mike Pompeo said earlier this month some of China’s actions were “completely unlawful”, condemning Beijing’s “campaign of bullying to control” the area. In response, China said the US “deliberately distorts facts and international law”.

Relations between China and the US have also deteriorated recently over issues including Beijing’s handling of the coronavirus pandemic, its actions in Hong Kong and its treatment of Muslim minorities.