A brutal Arctic blast will sweep across much of the UK on Easter Monday, according to the latest BBC weather forecast. BBC meteorologist Sarah Keith-Lucas warned up to 15cm of snow could blanket parts of the country. This wintry start to April comes as Britain experienced a mini-heatwave earlier in the week.

Ms Keith-Lucas told BBC Breakfast viewers: “We have some very fine weather for many of us throughout the course of today and in fact for tomorrow as well.

“But if you are not a fan of the cold and snow showers, you might want to look away halfway through this forecast!

“For the here and now, there is some sunshine around.

“Not everywhere – there will be more cloud across parts of central and eastern England.

“So if you have the cloud, it will feel a little bit cooler for the likes of East Anglia and the south-west of England.” 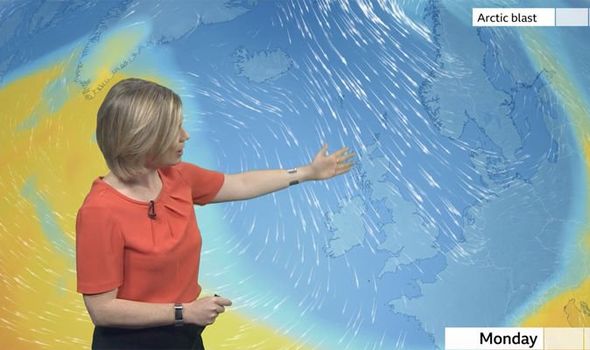 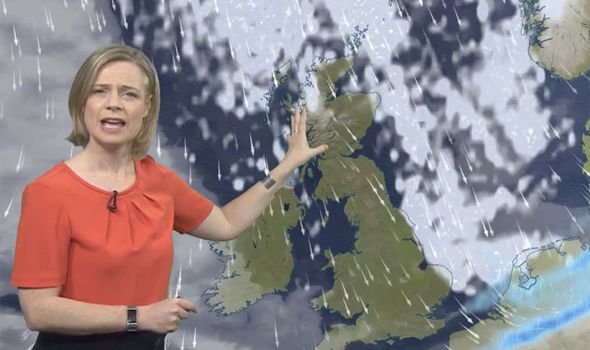 She continued: “But for the rest of us, there is lots of blue sky today, with temperatures around 11C to 13C for many of us and even up to 16C for eastern Scotland!

“It is going to be a cold night as we have clear skies. If you have gardening plans for the Easter weekend, we are expecting frosty nights tonight and tomorrow night as well.

“On Easter Sunday, the high pressure moves towards the south, and that will make bit of a change for our weather.

“Temperatures in the south will be a pleasant 14C to 15C but things are turning colder and winder from the north. And that is a sign of what is to come. 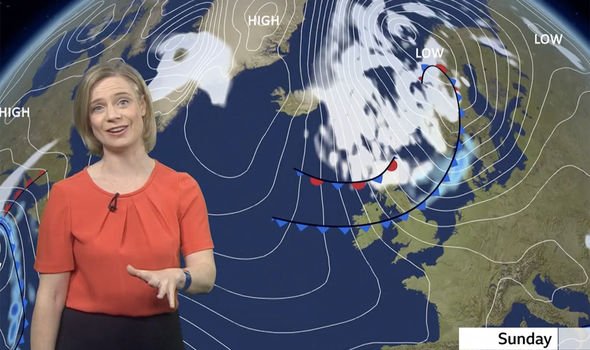 “On Easter Monday, this cold front pushes further south and opens the doors for this blast of Arctic air, these wind arrows coming right from the Arctic.

“It is going to be a gusty day. There will be some sleet and snow showers, even on lower ground.

“They will mainly be draped along the coast, so eastern England, the Irish Sea. There could be as much as 15cm of snow falling across parts of the higher ground in Scotland.” 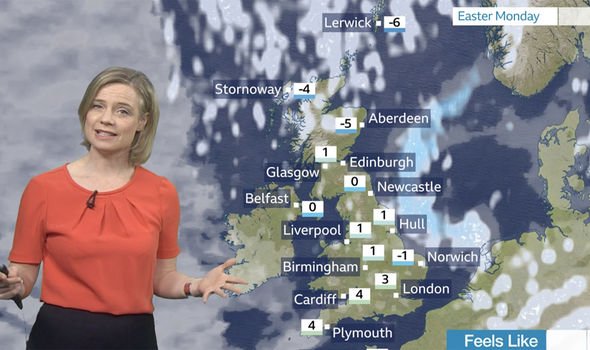 Ms Keith-Lucas added: “Winds across the country will be around 40mph, but they could reach about 60mph in Scotland.

“So even though temperatures on your thermometer could read 3C to 8C on Easter Monday, when you add on that wind chill, with the sleet and snow, it will feel subzero. So a definite wintry feel to the weather on Monday.”

The BBC weather presenter said after this “brief U-turn” in the weather, things will turn “a bit warmer again next weekend”.

The Met Office said conditions would be mild for most of the weekend, with highs of 14C (57F) on Sunday.

The temperatures could bring snow on Monday, prompting concerns that the Arctic chill could tempt people to meet inside, which is still banned under coronavirus restrictions.

Earlier this week, some parts of the UK experienced their warmest March temperatures since records began, according to the Met Office.

Bude, in Cornwall, recorded its highest temperature for a March day, at 23.4C.