BBC Weather forecaster Matt Taylor said the UK will see thermometers rocket to temperatures unseen since the autumn of 2016. Southeastern areas are expected to hit as high as 30C on Monday and Tuesday, with the rest of the UK set for double figures. Mr Taylor however noted the “summer boost” will be short-lived as temperatures are expected to once again return to their seasonal average from mid-week.

The meteorologist said: “A late boost of summer is going to be with us for the next few days. The forecast is one in which we will gradually see that heat return and build, particularly to the south and the east of the country.

“We had relentless rain at the weekend across the West of Scotland, that’s now eased away today at least, we’ll see some heavy rain back later.

“But a much better day here, especially after the recent flooding but some of the hottest conditions we found particularly across England and Wales. 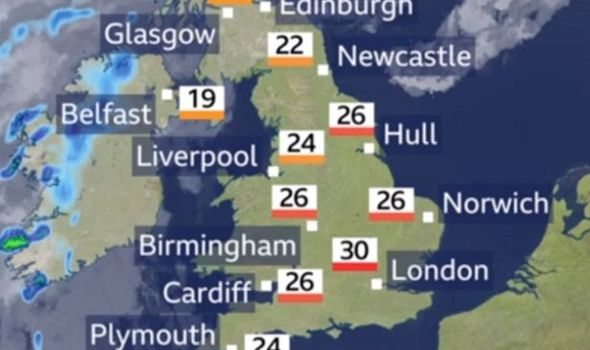 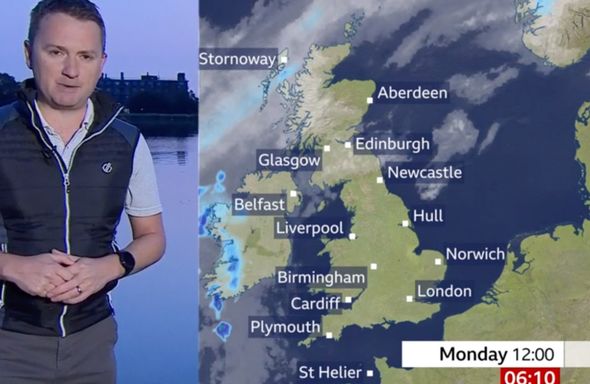 Mr Taylor continued: “Across England and Wales, mist and fog patches to begin with, those will clear for long, blue skies that will take us into the afternoon.

“Temperatures could hit 30C across the southeast corner later. The first time we’ve seen 30C in September since 2016. That heat though will lead us into quite a nice night for many of us tonight across England and Wales, it should be dry and clear with some patchy mist and fog again.

“But in Scotland and Northern Ireland some heavy bursts of rain return for a time – not great news as we’ve seen flooding in western Scotland. Across the board temperatures holding up in double figures, in the mid-teens, to take us into tomorrow morning.”

Mr Taylor forecast rain will continue to plague Scotland and Northern Ireland through Tuesday morning, with some isolated showers also set to hit across England and Wales. 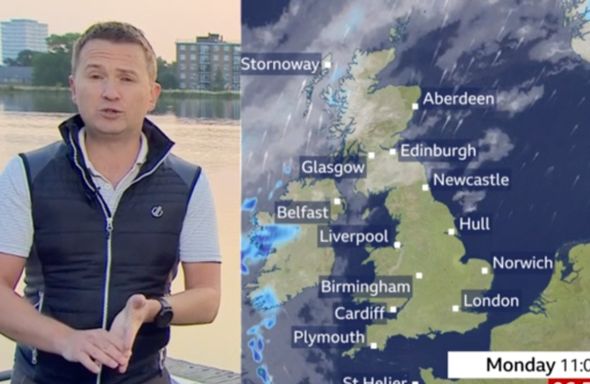 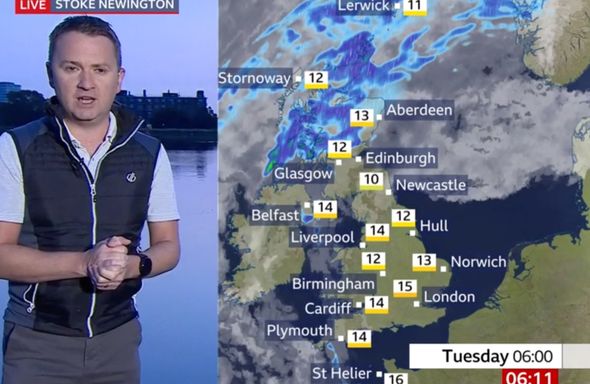 He said: “The heavy rain overnight into parts of Scotland eases its way northwards through tomorrow and there’ll still be a few showers across the west, a bit more cloud in Wales and western parts of England, in particular, producing the odd, isolated showers.

“But eastern parts of England tomorrow are staying dry and sunny and, again, close to 30C. But it is just a brief burst of heat, things turn cooler later.”

Mr Taylor said conditions will brighten for most of the UK through Tuesday despite a cloudy start across western areas.

Temperatures will slowly start to return to their seasonal average as a northeasterly moves in across the UK, bringing thermometers down to 12C in some areas. 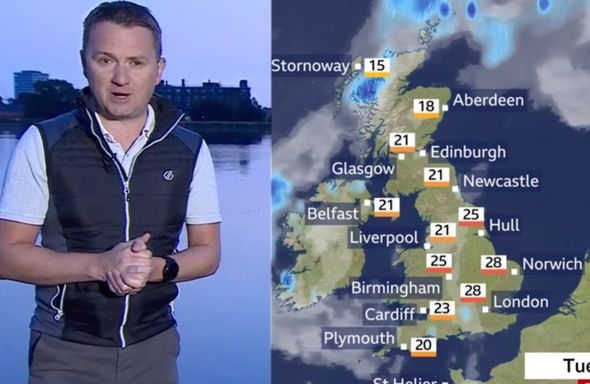 The BBC Weather forecaster said: “Into tomorrow, there will be more cloud generally, particularly in western areas but there’s not going to be as much rain.

“Here it could be actually a little more brighter tomorrow afternoon and it will be a bit warmer.

“But this all changes as we go into Wednesday, we switch our wind round for a northeasterly, that will bring low cloud across eastern parts of Scotland, northeast England, there will be some drizzle to go with that.

“Largely dry and bright, still around 24C in the east and south of England but it’s going to be around 12C to 13C across some parts of Scotland. So after a brief upsurge in temperatures, they will be down again.”