BBC weather forecaster Carol Kirkwood warned of ‘temperatures once again on the up’ for the UK as we move through the week. She explained the country is going to brace for some ‘humid’ and ‘sticky’ conditions, especially through this evening and overnight, as sunshine and dry weather are going to make their way as we head through the afternoon, replacing cloudy conditions and rain expected for later this morning. Temperatures, once again, will feel quite warm with highs up to 28C, possibly 29C, especially as we head into tomorrow and Wednesday. Referring to this evening and overnight, Ms Kirkwood warned ‘it’s going to be quite sticky and humid, with an overnight low of 18C degrees especially in the southeast”.

Ms Kirkwood warned: “After a bright start in the east, we’ll see the cloud will build so essentially clouds behind that band of rain and sunny skies across the far north with temperatures 14C to 19C degrees right about 23C to 25C degrees.

“Temperatures once again on the up.

“As we push further south, through this evening and overnight we say goodbye to that band of rain and we look at few showers, mist and fog patches forming as well.

“It’s going to be quite a sticky night, it will feel quite humid especially with an overnight low of 18C degrees in the southeast. 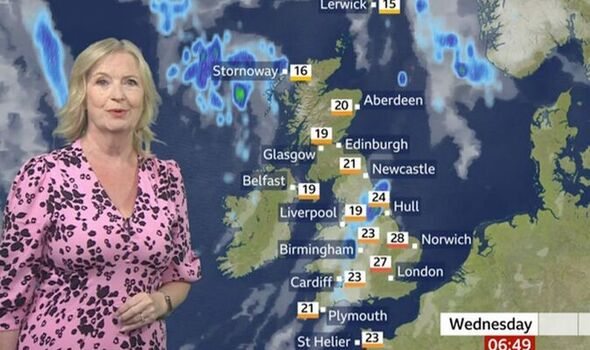 Referring to today, she explained: “We’re going to have some have rain moving eastern at times, and that’s because we’ve got this clutch of weather fronts moving from the west towards the east.

“Behind that we will return to some sunshine, but also some showers.

“We’ve been watching this rain coming in through the course of the night, moving across Northern Ireland through the Irish Sea, now affecting parts of weather and southern Scotland, northwest England, Wales and the southwest.

“As it moves eastwards, it will turn heavier across southern Scotland, Northern England into the Midlands and Wales.” 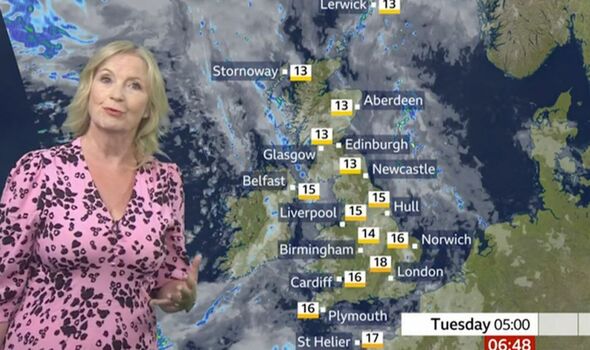 As we head into tomorrow, she said: “A new weather front coming in and taking with it outbreaks of rain so they’re going to be heavy and persistent like the one we’ll see at times today.

“Eastern areas, starting off dry with a fair bit of sunshine around and behind that band of rain once again we’ll see return to some brighter skies.

“It’s going to feel quite humid with temperatures up to 25C and 27C degrees.”

Referring to Wednesday, she forecasted: “Low pressures close by to the northwest so it’s going to be windy across that area. 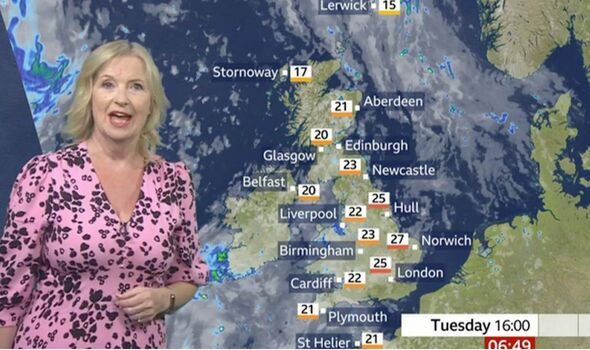 “We have a weather front moving southeastwards taking its rain with it, not getting into the far southeast at this stage.”

She concluded: “Behind it again we’ll see some sunshine with just a few showers with temperatures up to 28C degrees, possibly 29C”.

READ NEXT:
Poll result: Does Brexit justify a second Scottish Independence vote?
Ruth Davidson v Nicola Sturgeon: who do you back on future of Union?
Russia mutiny: Troops refuse to fight as Putin gets desperate
Vladimir Putin faces ‘beginning of the end’
Another Russian base up in smoke after explosion – Putin reeling