BBC Weather’s Carol Kirkwood warned her viewers the 1st of July will be disappointing with heavy rain and unsettled weather throughout the day. She forecast showers up and down the country with a new weather front moving in from Scotland southwards, bringing heavy rain. She noted some of these showers could be thundery and the wet weather is set to last until the weekend where the UK will experience more unsettled weather.

Ms Kirkwood said: “There is a lot of cloud around and some mist and fog.

“This will mainly be on the coast and hills and we are also looking at some heavy showers for some which in some cases are likely to be thundery.

“What we have got is this shallow area of low pressure, it is not particularly potent and there will be a couple of weak fronts moving through it which will be introducing some showers and rain.”

Ms Kirkwood explained the spots across the UK that will see showers throughout Wednesday. 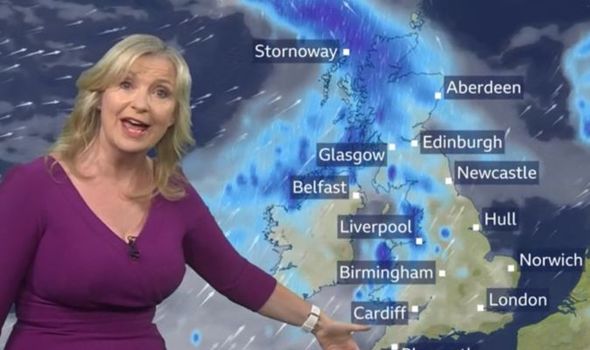 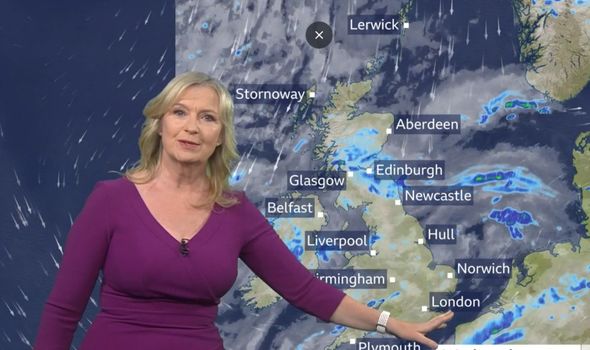 She said: “First thing this morning we have some showers in Kent that will clear away.

“We will have our weather front sinking south across Scotland, through Northern Ireland and it will get to northern England and bring some showers with it.

“For the rest of England and Wales we are not immune to a shower and through the afternoon some of those showers could be very heavy and thundery.”

The BBC Weather forecaster explained there will be strong gusts across the country, most notably along the coasts. 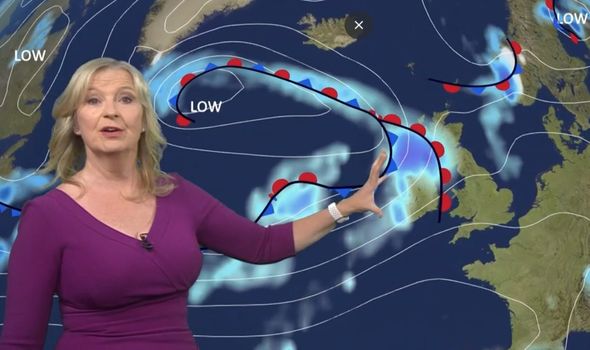 Ms Kirkwood continued: “There will be gusty winds today particularly on the coasts and most notably in the English Channel.

“We have also got a northerly wind coming in from the far north of Scotland making it feel cooler.

“This will be a disappointing start to July but as we push further south we are looking at high of 21 degrees.”

The majority of England and Wales should see temperatures highs of at least 18 degrees Celcius despite the winds and rainfall.

However, in Scotland, there will be a temperature low of 13 degrees in Stornoway and a high of 16 degrees in Edinburgh.” 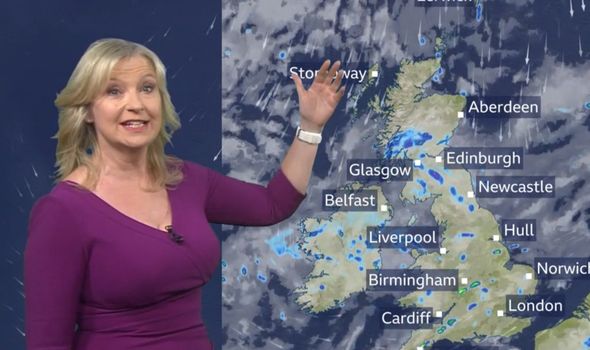 Ms Kirkwood explained that going into Wednesday night many of the showers across the country will fade.

But as we enter Thursday morning more rain is expected, most notably for central and northern England.

Ms Kirkwood said: “Through Wednesday evening and overnight many of the showers will fade.

“But as our weather front comes south these showers will merge and cause heavy and persistent rainfall.

“Not a particularly cold night for most but note the north of the country still feeling that northerly wind so it will feel much cooler.”