BBC Weather forecaster Matt Taylor warned temperatures could reach above 17C for many in the south as southern gales reach the country throughout the day at a speed of up to 60mph. More rain is however forecast for parts of south-west England and Wales, threatening rivers to continue to spill in already heavily flooded areas.

Mr Taylor said: “The heaviest rain at the moment is across the west and south. There might be showers across parts of western Scotland and pushing back into Northern Ireland.

“A bit of sunshine between the showers throughout the country. Lots of cloud in the south.

“Patchy rain ongoing, some wetter conditions across the south-west.

“And for all it will be a blustery day. Winds topping gale force, with 50-60mph gusts across the north.

“Temperatures are getting into quite a mild direction, it is possible sunshine could lift temperatures above 16C or 17C.” 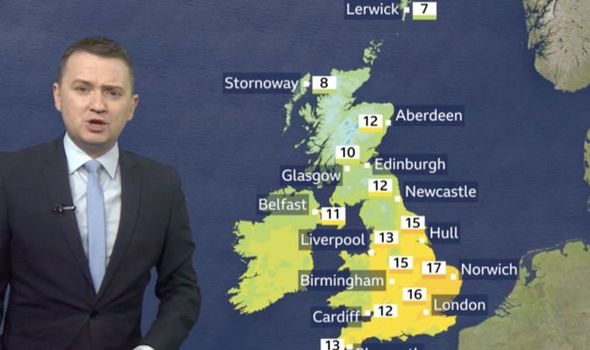 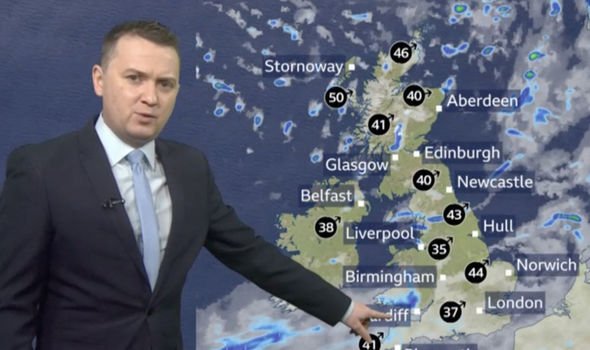 The Met Office has issued a “danger to life” warning as Britain braces for yet more flood chaos as a month’s worth of rain is set to fall in 24 hours.

Residents in some parts of the country could face flooding and more heavy rainfall with amber and yellow warnings in force.

Mid and northwestern areas of Wales have been warned to brace themselves as heavy rainfall could bring fast flowing or deep floodwater.

Up to 90mm of rain was expected to hit Wales from last night to 10am this morning.

Power cuts, travel disruption and danger to life warnings are all in place for the region.

The average rainfall for March is 117mm, meaning that the worst affected areas could be hit by around three weeks of rain in just over a day.

The Met Office warned that it is possible that some areas will be cut off thanks to the brutal downpours.

Flooded roads and deep, fast-flowing water could put people in serious danger as well as isolate them. 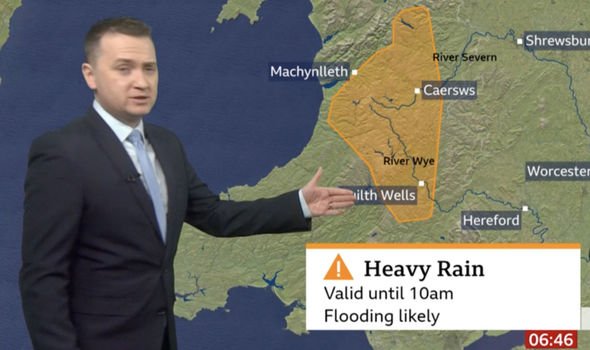 Met Office meteorologist Claire Nasir said: “We are expecting some high rainfall totals, particularly over the Welsh mountains, the Peak District as well as the moors of Devon and Cornwall.

“Pretty much the higher ground capturing that wet weather and that will run into the river system, so yet again the River Severn will be vulnerable to higher levels over the next few days.

“Over Tuesday you can see the winds will be strong and then this wavering front continues to feed in cloud and rain to more southern areas for the latter part of Tuesday into Wednesday.”

The Environment Agency issued over 180 flood warnings and alerts across the nation.