Rain will arrive for North Western Europe into next week as a band of low pressure will push across Europe leaving heavy rainfall in its path. The BBC weather forecast says this strong winds will send temperatures across northern areas continent falling through the week. Southern areas will remain mild and temperatures will rise across these areas of Europe as next weekend arrives with highs of 19 degrees in London, 25 in Paris and 25 in Madrid expected on Saturday.

BBC weather presenter Stav Danaos said: “Over the weekend we have seen low pressure move through central portions of the European continent from the south west up towards the north east.

“It has brought some pretty heavy rainfall at times.”

Danaos added: “As we head on into Monday that wet weather become confined to the North East towards the Baltic States, some rain pushing into Sicily and Southern Italy.

“Very warm in Greece, the Islands and into the eastern mediterranean, hot again in Cyprus on Monday.” 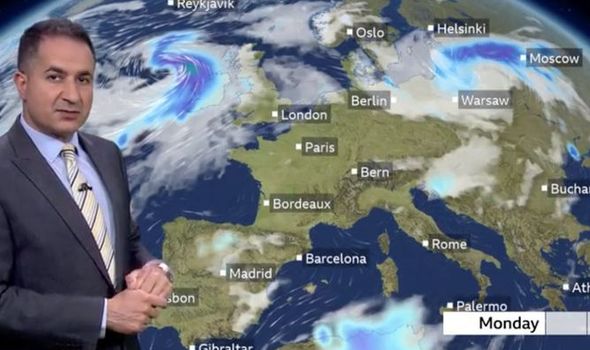 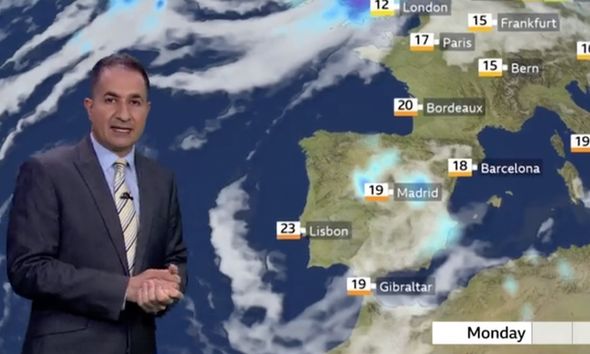 The weather presenter went on to say Spain will see a few showers on Monday but some sunshine in areas.

Monday will see temperatures of 19 degrees in Madrid and 18 in Barcelona.

Danaos added: “Temperatures around average, a little bit below across the North West of the continent as we have still got some chilly air around.”

He explained an area of low pressure in the North West Europe region “is going to bring wet and windy weather to the UK and to Ireland” on Monday. 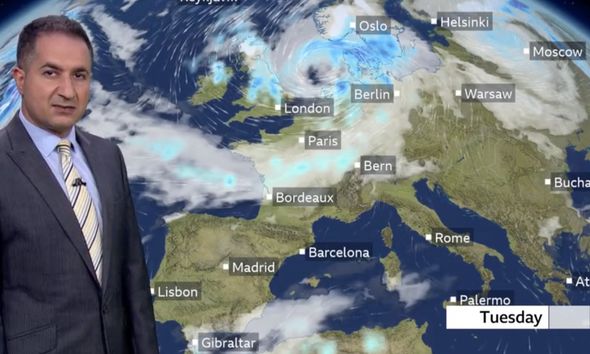 He added that the wet and windy hitting the UK will be across “Northern Germany, Denmark and southern Scandinavia” by Tuesday.

The weather presenter explained “it will feel quite cool particularly because of the strength of the winds” in these areas.

Temperatures on Tuesday will be 14 degrees in Berlin, 8 in Oslo and 15 in Warsaw.

Next week will be much cooler than previous weeks for the UK as temperatures fall but will begin to rise again next weekend. 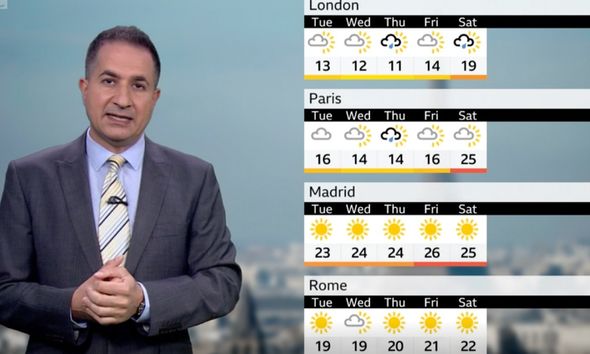 Next Saturday will see temperatures rocket to 19 degrees in London but rain is expected.

It will be sunny and warm next week for Spain with temperatures hitting 23 on Tuesday, 24 on Wednesday, 24 on Thursday, 26 on Friday and 25 on Saturday.

Paris will see lower temperatures of 16 degrees on Tuesday, 14 on Wednesday, 14 on Thursday, 16 on Friday but they will rise sharply to 25 on Saturday.