Weather: Showers to persist in UK after thunderstorms

England and Wales in particular have been warned to expect further heavy rainfall accompanied by thunder and lightning as the UK appears set for a week of stormy weather. The forecast comes after Sunday night saw the nation struck by over 36,000 flashes of lightning and huge downpours into Monday morning. BBC Weather presenter Matt Taylor predicted conditions would initially improve throughout Monday to offer “some sunshine,” before shifting in the late afternoon towards rain and wind that would dissolve into thunderstorms overnight.

Speaking on BBC Breakfast, meteorologist Mr Taylor said: “There was plenty of lightning and thunder across the UK last night, England and Wales especially.

“There were over 36,000 flashes of lightning in and around the UK in the space of 12 hours.

“While most of the thunder and lightning has now faded, the rain hasn’t.”

The weather presenter highlighted that the downpours had steadily shifted northwards as morning broke, with Scotland set to experience a “spell of rain” across the early hours of Monday. 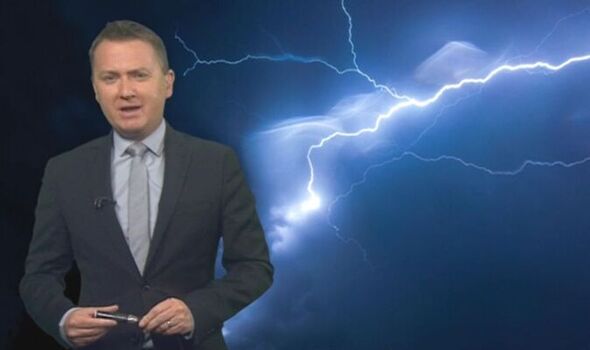 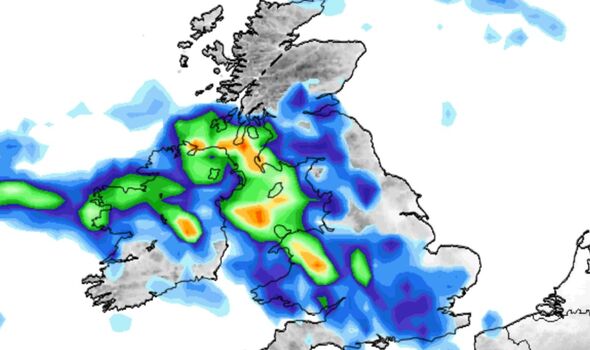 He continued: “For most, actually a pretty decent day out there – dry with some sunshine, pretty warm as well.

“Temperatures are widely in the low to mid-twenties, but through the afternoon we start to see some showers return.

“A few through the southeast, but it’s towards the southwest and Wales where we can see some more heavy and thundery downpours.

“In the late afternoon, into the evening, and then overnight, they will become quite frequent again.” 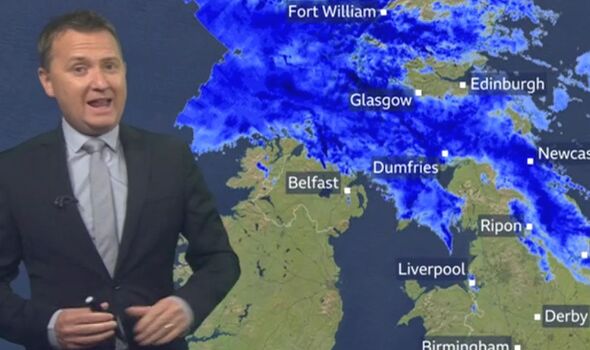 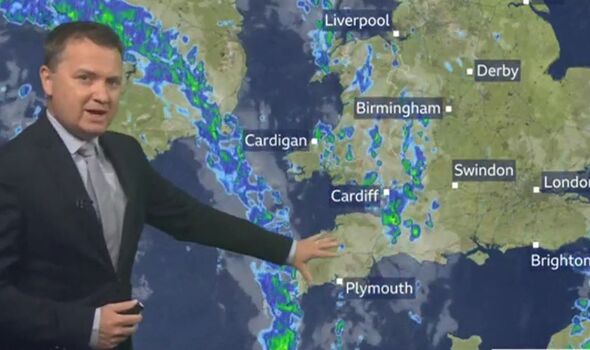 Mr Taylor predicted a return of “heavy and thundery downpours” for Monday night, set to affect a large portion of England and Wales.

He added: “Not affecting many eastern areas, it’s going to be mainly across the western half of the UK, drifting northwards into tomorrow morning.

“The wind is quite strong towards the southwest as well, and that wind will be coming in from a southerly direction, meaning it will not be a chilly night.”

The nation is tipped to experience conditions similar to Sunday, with a humid evening and night with breaks of thunderstorms which will steadily drift north into the morning hours. 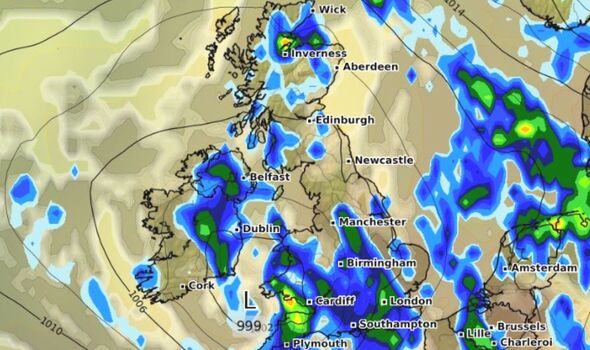 In light of the prediction for heavy rainfall, a total of five flood warnings have been issued across English by the Environment Agency.

Areas in the southwest near Swindon and Plymouth have been issued warnings, as well as three further areas in central England.

The Environment Agency said: “Land, roads, and some properties may flood and there may be travel disruption.”

Within one of the issued flood warnings, the Environment Agency added: “Given the unpredictable nature of thunderstorms, there is low confidence in the locations and impacts of rainfall at this point.”

Low-lying areas close to rivers and streams were described as the locations most vulnerable to flooding as water levels could rise rapidly during the nighttime downpours.