A locust swarm “of biblical proportion” has sparked apocalyptic fears in India, as millions of the crop-eating insects overwhelm entire cities. Agricultural experts claim that the locust swarms have already destroyed hundreds of thousands of hectares of cropland across India, and could spark a food crisis across the world. This comes as India also grapples with an unprecedented heatwave, with temperatures reaching 50C, as well as soaring coronavirus cases in the country.

Indians have pointed to the simultaneous crises rocking the country as signs of an impending apocalypse.

One clip showed the sheer number of insects had turned the sky black, after the swarms blocked out the sun.

JUST IN: Greece holidays: Nation has blacklisted Britons when it reopens 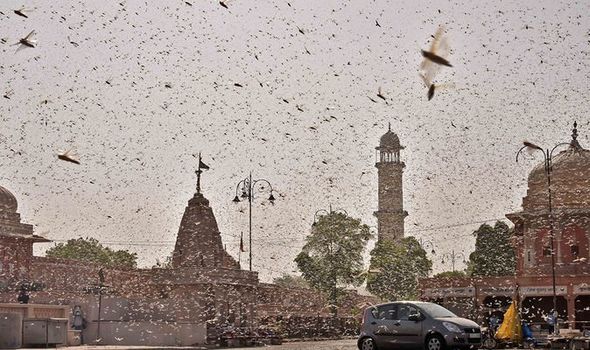 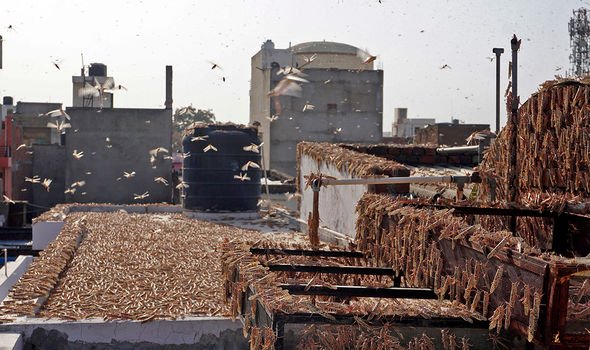 The locust attack on Jaipur even stunned experts, as locusts typically stay away from urban centres.

In response, drones, tractors and cars have been sent out to spray pesticides in a desperate bid to stop the infestation.

The locusts were arriving in India from Iran and Pakistan, where the swarms have already devastated huge agricultural harvests.

India has seen half a dozen states in the west and central regions of the country blanketed in locust swarms. 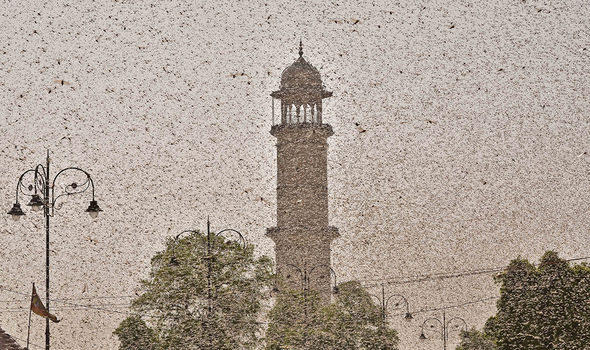 Google Trends suggest that Indians are fearing apocalyptic scenarios, with searches of Biblical passage on locusts sky-rocketing since news of the locust attacks broke.

“All the biblical plagues. In the Bible, it was because headstrong rulers would not do right.” 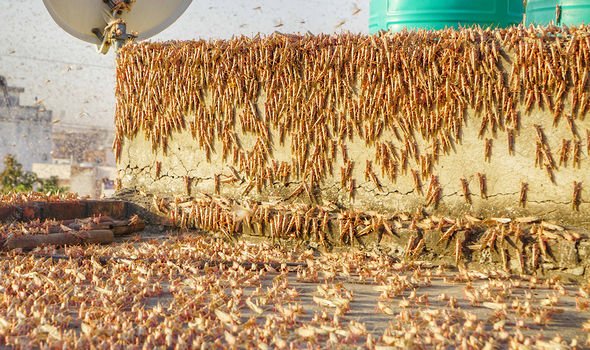 Another user tweeted: “First fires, then disease, then floods, and now locusts. The Bible called it.”

The Indian government’s Locust Warning Organisation’s deputy director K.L. Gurjar said: “Eight to 10 swarms, each measuring around a square kilometre are active in parts of Rajasthan and Madhya Pradesh.”

Locusts have affected around 64 countries in the past few months, which include Iran, Afghanistan, Africa and India.

Experts fear that the pests will continue to spread across the country well into the summer.