The US President has formally recognised the murder of an estimated 1.5 million Armenians by the Ottoman Empire as genocide. The concession, which Mr Biden made as a presidential proclamation, had reportedly been planned in advance.

Mr Biden purportedly communicated his intentions of making a proclamation to Turkey’s President Recep Tayyip Erdogan during a phone call on Friday.

The US President said: “Each year on this day, we remember the lives of all those who died in the Ottoman-era Armenian genocide and recommit ourselves to preventing such an atrocity from ever again occurring.

“Beginning on 24 April 1915, with the arrest of Armenian intellectuals and community leaders in Constantinople by Ottoman authorities, one and a half million Armenians were deported, massacred, or marched to their deaths in a campaign of extermination.

“We honour the victims of the Meds Yeghern so that the horrors of what happened are never lost to history. 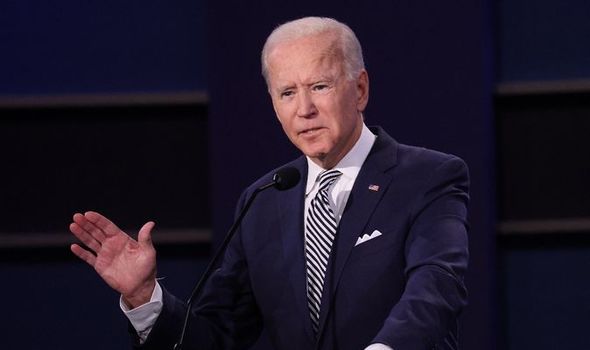 “And we remember so that we remain ever-vigilant against the corrosive influence of hate in all its forms.”

Turkey responded to Mr Biden’s statement, accusing him of basing his judgement “solely on populism”.

“We have nothing to learn from anybody on our own past.

“Political opportunism is the greatest betrayal to peace and justice.

“We entirely reject this statement based solely on populism.”

The Turkish Foreign Ministry released a statement rejecting Mr Biden’s remarks and urging him to “correct this gave mistake”.

It wrote: “It is clear that the said statement does not have a scholarly and legal basis, nor is it supported by any evidence.

“This statement … will open a deep wound that undermines our mutual trust and friendship. We call on the US President to correct this grave mistake.”

DON’T MISS
‘Desperate to welcome you!’ Spanish tourism minister pleads with Brits [VIDEO]
Want a PS5? UK customers should mark this date in the diary [INSIGHT]
Holidays 2021: The 8 countries Brits may be able to visit from May 17 [UPDATE]