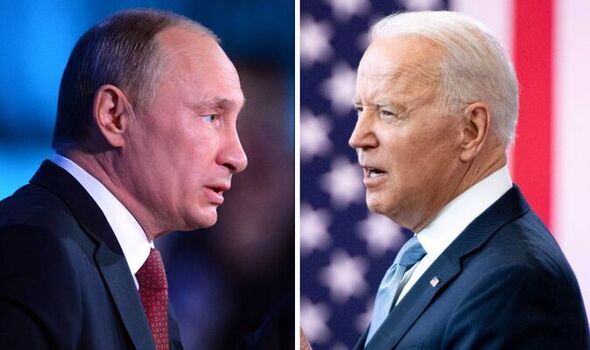 His doomsday message comes amid growing fears that Vladimir Putin is now backed into a corner after suffering setbacks in Ukraine. Mr Biden said the Russian despot was “not joking” when he spoke of using tactical nuclear weapons.

It comes as Ukraine’s President Volodymyr Zelensky last night warned that Russian officials had started to “prepare their society” for the possible use of nuclear weapons.

The US and the UK have said that Mr Putin’s nuclear sabre-rattling should be taken seriously.

Defence Secretary Ben Wallace has warned the Russian leader is not acting in a “rational” way.

Ukraine has been steadily retaking territory occupied by Russia, including in the four regions it illegally annexed recently. For several months US officials have been warning that Russia could resort to the use of weapons of mass destruction if it suffered setbacks on the battlefield.

President Biden said the Russian leader had to be taken seriously when he talked about using tactical nuclear, biological or chemical weapons, “because his military is, you might say, underperforming”.

Mr Biden told fellow Democrats: “For the first time since the Cuban Missile Crisis, we have a direct threat to the use of nuclear weapons if in fact, things continue down the path they’ve been going.

“We have not faced the prospect of Armageddon since Kennedy and the Cuban Missile Crisis.”

Mr Biden’s references were highly unusual for a US president, sparking alarm among allies.

Since the Cuban Missile Crisis, 60 years ago this month, the White House has rarely spoken in such serious tones about nuclear weapons. While experts say any nuclear attacks would be relatively small, Mr Biden warned even a “tactical strike” in a limited area risked triggering a wider conflagration. During a speech last Friday, President Putin said the US had created a “precedent” by using nuclear weapons against Japan at the end of the Second World War.

Putin, who turned 70 yesterday, has also threatened to use every means at his disposal to protect Russian territory. Yet even as he signed papers formally annexing four regions of Ukraine, Kyiv’s forces were advancing in those areas. Meanwhile, hundreds of thousands of men have fled Russia, rather than waiting to be drafted.

President Zelensky had previously dismissed Moscow’s nuclear threats as a “constant narrative of Russian officials and propagandists”. Russia’s foreign ministry said on Thursday Moscow had not changed its position that nuclear war “must never be waged”.

“They are not ready to do it, to use it. But they begin to communicate. They don’t know whether they’ll use or not use it. I think it’s dangerous to even speak about it.”

However, he added that the threat may not be high. He said: “I think the risk of using nuclear weapons is not that definite as some experts say, because they [Russia] understand that there is no turning back after using it, not only the history of their country but themselves as personalities.”

Mr Zelensky said that in less than a week, almost 200 square miles had been retaken from Moscow’s forces in the southern Kherson region.They have inflicted heavy casualties on Russian troops, with dozens of fatalities.

He said since the start of the month, a counter-offensive by his forces had reclaimed “more than half a thousand square kilometres of territory and dozens of settlements”. Since the annexations, Kyiv has pushed on to recapture areas occupied by Russia. Ukrainian officials have appealed to everybody living in areas ahead of the advance to evacuate, and thousands have fled the fighting.

In Zaporizhzhia, the death toll from an attack on a residential area on Thursday rose to 11.

Anatolii Kurtiev, acting mayor, said the intensity of shelling had been high in recent days and many bodies were likely still under the rubble. Large-scale humanitarian convoys out of the city have been suspended. He also said Russian forces were shelling critical infrastructure in the city.

The success of Ukraine raised hopes the war could be over as early as Christmas. Putin’s forces could be pushed out of the eastern Donbas region by the end of the year, a senior British government source said.

And Ben Hodges, former commander of US forces in Europe, said there was no doubt Russian lines were collapsing, adding: “It’s an army that’s been defeated.”