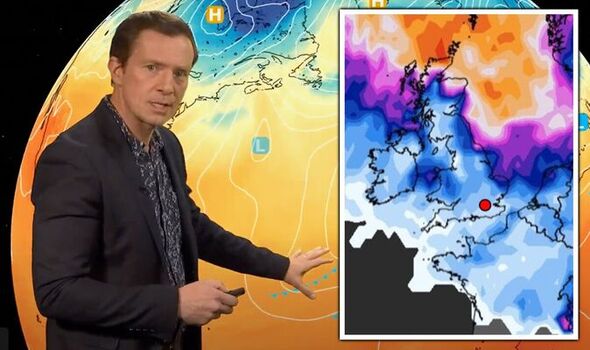 A low-pressure system laden with moisture threatens to crash into freezing air gripping the UK to unleash a snow deluge.

Southern regions are in the firing line for the heaviest showers after the weekend amid warnings to brace for a “significant surprise”.

Weather models remain uncertain on the exact track of the low, nevertheless experts warn another week of freezing weather awaits.

“It could bring tropical air and moisture that will hit colder air in place across the UK, and that is a recipe for more significant wintry weather and the potential for more widespread snowfall, but not all the models are agreeing.”

The tropical bubble could heat either into Britain bringing heavy snow across a large chunk of the south or into France skirting the UK southern coast, he explained.

He said: “We are looking at a couple of scenarios with that low coming in from the southwest. The low could drift up from the southwest from mid-week and bring warm air and moisture hitting the cold air and for a time bringing heavy snow across parts of the south.

“The other more likely scenario is that that low pressure system drifts down towards the south heading to France taking the warmer air with it and leaving the UK with north or north-easterly winds in the colder air still the likelihood of wintery showers in the east, but the more significant snowfall from the low itself would be in the far south.”

Either way, Britain faces freezing temperatures with the risk of rain, sleet or snow in the run up to mid-month, he added.

Heavy snow could strike between Monday morning and the middle of the week, forecasters warn.

A complex synoptic set up which has driven the cold snap since the start of the weekend continues to keep experts guessing.

A small low-pressure “cyclone” hovering around the south coast of Britain through the start of next week has added to the meteorological headache.

Jim Dale, meteorologist for British Weather Services, said: “This is one to watch as it could end up coming into the UK, or it could end up across northern France and Belgium.

“What we are watching is a secondary low-pressure system, or ‘runner’ which will come in off the Atlantic after picking up moisture, and when this hits the cold air over the UK it could bring some significant snow.

“This has the potential to bring a surprise or shock to a few people across southern Britain with the risk of snow from Monday morning into the middle of the week.”

With just under a fortnight to go until the big day, there is “everything still to play for” in terms of a White Christmas, he added.

Bookies have once again slashed the odds on festive snow with Coral offering 5-4 from 2-1 for snow on December 25.

Spokesman John Hill said: “It may not be long before large parts of the UK see a blanket of snow as temperatures are dropping fast. As a result of this cold snap, we now make it as short as 1-2 for the UK to have a White Christmas this year.”

He said: “Low pressure may bring snow or heavy snow in southern fringes during the middle part of next week. Confidence is growing for a cold northeast or easterly flow to become established during, and this would bring in further snow/heavy snow showers from the east.”