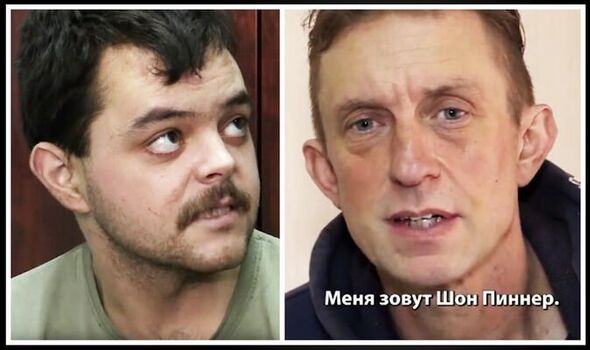 British fighters Shaun Pinner and Aiden Aslin spoke separately on the Rossiya 24 state TV channel, each being prompted by an unidenfied man.

It is not clear how freely the two men are able to talk in the footage.

Mr Pinner, 48, is a former Royal Anglian soldier. He was captured in Mariupol fighting alongside Ukrainian marines.

Mr Aslin, 28, from Nottinghamshire, had also been defending the beseiged city before being forced to surrender after he ran out of food and ammunition.

In the footage, both men ask Boris Johnson to help bring them home, in exchange for Ukraine release pro-Russian politican and oligarch Viktor Medvedchuk – known as the “Prince of Darkness.”

Mr Medvedchuk appeared in a video released by Ukraine’s SBU Intelligence service today at around the same time, also asking to be swapped.

The oligarch appealed to both Volodymyr Zelensky and Vladimir Putin, asking to be set free in exchange for the defenders of Mariupol and any civilians being allowed to leave.

The port city of Mariupol, a key strategic target for Putin and the site of some of his war effort’s most horrific atrocities, is nearly completely taken by Russian forces.

Mr Pinner and Mr Aslin could be seen being shown a video of Mr Medvedchuk’s wife, Oksana, making an appeal over the weekend for her husband to be swapped for the two British nationals.

Mr Pinner appears exhausted and worried. After being shown the video, he said: “I’d like to appeal to the government to send my back home, I’d like to see my wife again.”

He went on to make a direct appeal to Mr Johnson on his and Mr Aslin’s behalf, saying: “We look to exchange myself and Aiden Aslin for Mr Medvedchuk. Obviously I would really appreciate your help in this matter.”

He added that he spoke a little Russian, and had been treated well.

Mr Aslin wore a t-shirt bearing the emblem of Ukraine’s far-right and controversial Azov battalion in the video.

He said: “I think that Boris needs to listen to what Oksana (Medvedchuk’s wife) has said.

“If Boris Johnson really does care about British citizens like he says he does then he will help.”

He had been placed under house arrest in May 2021, charged with high treason and later, aiding terrorism. He has denied any wrongdoing.

The pro-Russian said that Putin was godfather to his daughter, adding in the video: “I understand the situation.”