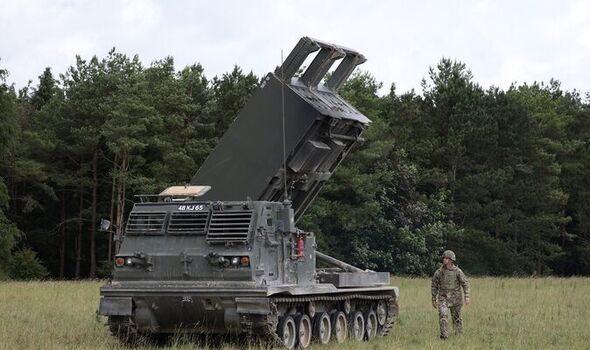 The commander of an artillery unit said: “Thanks to these weapons, we’ve carried out really high priority missions.” These included hitting key enemy military bases, columns of armoured vehicles and ammunition supplies.

The missiles, fired by six British supplied Multiple-Launch Rocket Systems, or M31A1, are precision-guided and have a range of more than 50 miles.

Speaking to Sky News, the commander said, in his opinion, around 30 per cent of the successes achieved by Ukraine in a major counteroffensive in the east were thanks to British, as well as German, rocket launchers.

Kyiv says it has made significant gains across four regions illegally annexed by Moscow. Luhansk governor Serhiy Haidai said: “Several settlements have already been liberated from the Russian army.”

There are also reports of major breakthroughs in the Kherson, Donetsk and Zaporizhzhia regions.

In a rousing address, Ukraine president Volodymyr Zelensky declared: “Our soldiers do not stop.

“And it’s only a matter of time before we expel the occupier from all of our land.”

Yesterday, he chaired a meeting of top military officials. They discussed ways of countering new weapons being used by Russia, including Iranian-made drones. Kyiv claimed 12 had attacked from the south overnight, with six shot down.

Any hope of talks with Vladimir Putin seem to have disappeared after the Russian president’s decision to rubber-stamp the “annexation” of the four regions yesterday.

Andriy Yermak, head of Zelensky’s presidential office, said: “Worthless decisions by a terrorist country are not worth the paper they are signed on.”

Retreating Russian forces have been ordered to dig in on a new defensive line. Dmitry Peskov, Kremlin spokesman, claimed: “The four regions will be with Russia forever.”

A pledge by the Biden administration to send an extra £547million in military aid to Ukraine triggered threats of a “direct military clash” between Russia and the US.

Anatoly Antonov, Russia’s ambassador to America, said: “We call on Washington to stop its provocative actions that could lead to the most serious consequences.”

The EU has passed its eighth sanctions package against Russia since the invasion began seven months ago.