They are conducting the longest desert patrols since the Second World War, hundreds of miles into Mali in the southern Sahara, to tackle growing terrorism across Africa. Almost 250 peace-keepers have been killed there since 2013, hundreds of thousands of locals have been displaced – and the threat from al-Qaeda and the Islamic State is rising. The UK missions – which have sent jihadists fleeing into the desert – involve more 200 soldiers in vehicles packed with guns and grenade launchers.

But instead of fighting they are gathering information on terrorists, denying them the chance to kill and rob locals.

In five months, the Long Range Reconnaissance Group has not fired one shot in anger as both terror factions fled. Our troops keep the jihadists moving, stopping them from forming a base – and we were among the first journalists to join the patrols.

West Africa’s landlocked Mali, which is 95 percent Muslim, has for years been unstable in northern and central areas, where fighting has displaced 200,000 people.

The UN needed a reconnaissance force such as our A Squadron, Light Dragoons backed by B Company, 2 Royal Anglian for deep-penetration intelligence gathering.There are more than 13,000 UN troops from 56 countries in Mali. A separate counter-terror mission Operation Barkhane involves more 5,000 French troops – and 50 have died. 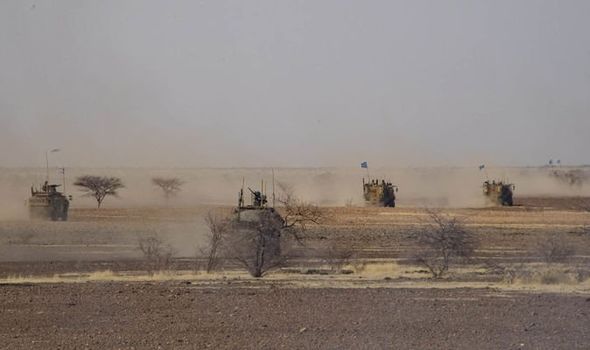 We were helicoptered into their temporary operating base outside Tessit, near the borders with Niger and Burkina Faso where 100 insurgents slaughtered 33 local troops recently.

Its berm defences of sand are hardened by the 124F heat in which troops need at least 10 litres of water daily. Many have lost more a stone in the heat.

Touching metal on the vehicles in the unbearable noon heat risks a burn while drinking water can be as hot as a cuppa.

But the soldiers trained hard to acclimatise, and there has not been a single heat-related injury in five months of patrols.

The mortar team fires special shells to light up the night sky, letting the terrorists know the UN force is still there, offering reassurance to locals.

Light Dragoons CO Lieut Col Tom Robinson heads the Long Range Reconnaissance Group and told us: “In Afghan we were seeking to defeat an insurgency. Here, we are trying to protect the people from an insurgency. 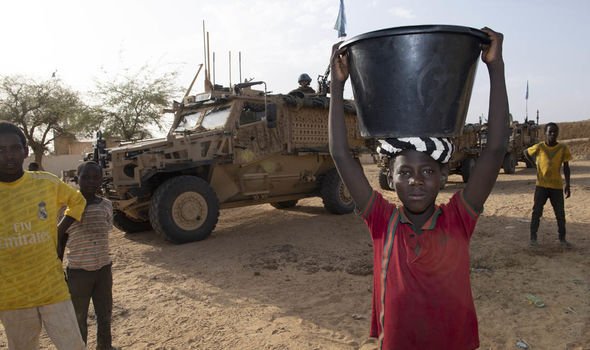 “Here, success looks like peace and security.” But he warned: “Of course, if someone threatens the local population or us we are trained and ready.”

The patrols, sometimes travelling 1,250 miles in 28 days, are a vital part of the UN mission to combat terrorists. Mali is the frontline against them.

Out of 150 villages visited by our troops, as many as 30 were thought to be run by al-Qaeda faction JNIM and Islamic State.

One hamlet feared being overrun so our troops sited themselves between the jihadists and the community – and the would-be attackers fled.

Terror groups cross into Mali from Niger and Burkina Faso, offering locals £250 a month, plus an AK47 assault rifle and a motorbike, to join them. But the British presence offers security. Lieut Col Robinson, 41, added: “They do not want to get into a fight with us and that effects the armed groups’ credibility.”

Terrorists use motorbikes to raid villages, demanding £1,700 “charity tax” from each house or the occupants face execution. Locals in Tessit were wary of the peace-keepers, many having fled rural bloodshed, and disguised their identity.A man in a blue head scarf said: “Security here has been bad. Bandits asking for money, killing people.” 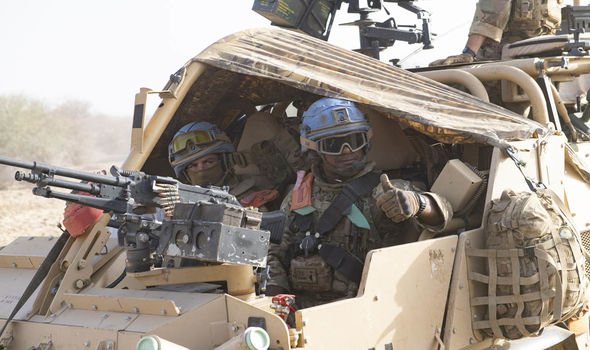 Village elder Mohammad, 40, said: “The community is very scared. Strange people who are armed are coming into this area from Burkina and Niger.”

A nervous-looking man on a motorbike said: “Some of my family members have been killed. If the British soldiers give this place security that is good.”

Each evening the Jackals “leaguer” up, like circling the wagons, heavy weapons pointing towards an unseen enemy.

Troop leader Capt Alexander Alderman, 27, from Surrey, said: “Success will mean us getting everyone home safely.

“Our operating area is the size of Belgium, it’s desert and it’s not war-fighting. But we are able to travel great distance.

“We will be doing our job right if not one shot is fired.”