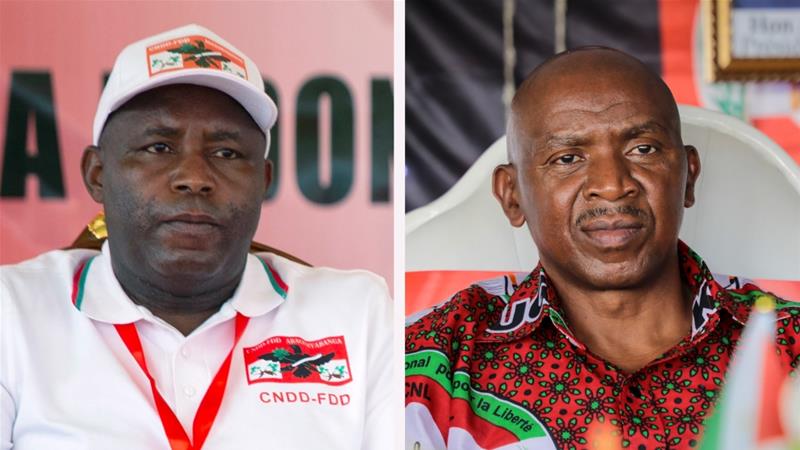 Voters in Burundi will head to the polls on Wednesday to pick a new president in a tense election held despite the threat of the coronavirus pandemic.

Seven candidates are vying to succeed President Pierre Nkurunziza, who is stepping down after 15 years in power.

Nkurunziza’s decision to run for a third term in 2015 was condemned by the opposition as unconstitutional and sparked mass unrest. After a failed military coup and a crackdown by security forces, hundreds of thousands of people fled to neighbouring countries to escape the violence.

This time, Nkurunziza’s governing CNDD-FDD party is fielding retired Army General Evariste Ndayishimiye, 52, as its candidate. A former rebel commander and security minister, Ndayishimiye heads the department of military affairs in the president’s office and is also the party’s secretary-general.

His main challenger is Agathon Rwasa, a former rebel leader and candidate with the National Congress for Liberty party. The 56-year-old, a longtime opponent of Nkurunziza, boycotted the elections in 2010 and 2015 claiming they were not free and fair.

Such claims have resurfaced again in the lead-up to the poll, while campaigning has been marred by inflammatory rhetoric and sporadic violence with opposition party members and civil society groups alleging abuses by the governing party’s youth league, the Imbonerakure.

“Violence and repression have been the hallmark of politics in Burundi since 2015, and as elections approach and the COVID-19 pandemic unfolds, tensions are rising,” Lewis Mudge, Central Africa director at Human Rights Watch, said late last month.

“There is little doubt that these elections will be accompanied by more abuses, as Burundian officials and members of the Imbonerakure are using violence with near-total impunity to allow the ruling party to entrench its hold on power,” he added.

More than five million people are eligible to take part in the poll, which could mark Burundi’s first peaceful transfer of power since independence in 1962.

Polling stations will open at 6am and close at 4pm local time. Provincial results are expected by May 26 and official results by June 4.

Candidates have promised to fix the struggling economy and create jobs for the youth as well as increase investment in infrastructure and key sectors such as farming.

Karuti Kanyinga, a professor of development studies at Nairobi University, said “in Burundi, elections are held to maintain the status quo”.

“The army and the ruling party will not let anyone else win, opposition candidates will dispute the results – and we will see the situation of 2015,” he told Al Jazeera.

“And with the rest of the world busy with COVID-19, the situation in Burundi might get worse.”

To date, the small country of 11 million people has recorded 42 confirmed coronavirus infections and one related death. Campaign rallies attracted thousands of people despite concerns that they could lead to an increase in infections.

Last week, the government expelled the World Health Organization’s (WHO) team in the country, accusing them of “unacceptable interference in its management of the coronavirus”.

Burundi has also shut down the offices of independent media houses and is ranked 160 out of 180 countries for press freedom by Reporters Without Borders, a media watchdog.

Meanwhile, Wednesday’s election will proceed without the presence of international observers.

On May 8, 12 days to the polls and before the scheduled arrival of an East African Community mission to the country, the government said the regional bloc’s observers would have to be in quarantine for 14 days, effectively ruling them out of the election process.

Abdullahi Halakhe Boru, a political analyst, said the governing party was “the winner in all this”.

“They have contained the opposition domestically, regional; countries are disinterested or dealing with their own domestic issues; the African Union is out of the picture; election observers are absent,” he told Al Jazeera.

“They are the clear winner.”