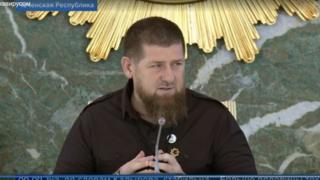 The powerful leader of Chechnya, Ramzan Kadyrov, has told an interviewer “I’m absolutely healthy”, without denying reports that he was rushed to Moscow last week with suspected coronavirus.

An Instagram video on Wednesday showed a cheerful Mr Kadyrov being interviewed in a park by local state-run Grozny TV.

Earlier he was seen on TV chairing a government meeting on the coronavirus emergency measures in Chechnya.

A catheter was spotted on his right hand, but mostly the hand was hidden.

The Russian opposition newspaper Novaya Gazeta says footage where the catheter was clearly visible was later taken down from the Grozny TV Instagram page, which is run by his aide, Akhmed Dudayev.

At that government meeting on Tuesday some of Mr Kadyrov’s aides wore masks and none was sitting close to him. He kept his right hand hidden under the desk most of the time. They described the coronavirus situation in Chechnya as “stable”.

Last week, Russian news agencies reported that Mr Kadyrov – a key ally of President Vladimir Putin – had been flown to a Moscow hospital from the North Caucasus republic, as he was suspected to have Covid-19.

His reappearance on Chechen media came after a six-day absence. There was no official confirmation of his reported hospitalisation.

The much-feared Chechen leader, who has cracked down hard on all dissent, has imposed a strict version of Islamic law in Chechnya and it was highly unusual for him to miss the weekend’s Eid celebrations marking the end of Ramadan.

“Even if I fell sick, in the world millions of people are infected with coronavirus, tens of thousands have died, and am I not human?” he said. He stretched out his hands for the camera – and this time no catheter was visible.

Mr Kadyrov’s own Instagram account, which had more than a million followers, was taken down by Facebook recently to comply with US government sanctions targeting dozens of officials close to President Putin.

Kremlin spokesman Dmitry Peskov also caught Covid-19 and was reported to be sick with double pneumonia, but on Monday he said he had been discharged from hospital.