WASHINGTON — The cost of federal flood insurance will need to increase significantly in much of the country to meet the growing risks of climate change, new data suggests, creating a political headache for the Biden administration.

The National Flood Insurance Program, which provides the vast majority of United States flood insurance policies, would have to quadruple premiums on high-risk homes inside floodplains to reflect the risks they already face, according to data issued on Monday by the First Street Foundation, a group of academics and experts that models flood risks.

The new data could point to higher flood insurance costs this year for homes at risk. On April 1, the Federal Emergency Management Agency, which runs the flood program, is set to announce new premiums, using modern flood-modeling techniques that more closely reflect the actual risks facing individual properties — the same approach that First Street said it had used in its calculations.

“If they took a purely risk-based approach, it would look like our numbers,” said Jeremy Porter, head of research and development at First Street and director of the Quantitative Methods in the Social Sciences program at the City University of New York. Several U.S. agencies, including the Federal Housing Finance Agency and the Federal Reserve Bank of Atlanta, use First Street’s data.

FEMA has issued a statement warning people not to assume that its new system for setting premiums, which it calls Risk Rating 2.0, will produce rate increases that match those modeled by First Street.

“Any entity claiming that they can provide insight or comparison to the Risk Rating 2.0 initiative, including premium amounts, is misinformed and setting public expectations that are not based in fact,” said David I. Maurstad, who runs the flood insurance program for FEMA.

Still, most experts agree that a closer analysis of flood risks will lead to costlier insurance for owners of high-risk homes than what they already pay. That presents a challenge for President Biden, who has promised to pursue a climate agenda guided by science and data, but has also said he is focused on addressing the economic concerns of middle-class households.

Climate and disaster experts argue the cost of flood insurance should reflect the full risk of living in flood-prone areas, as a warning to prospective home buyers and a signal to local officials to limit development in those places. Because the federal government has no control over land-use planning or building codes, which are set by state and local governments, the flood insurance program is one of its most powerful tools to influence how and where Americans build homes.

But a big jump in rates may put more pressure on the household budgets of people who already live in vulnerable areas, and also cause home values to fall. 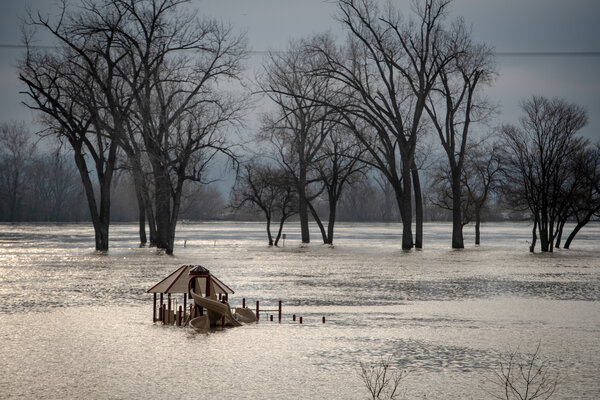 “FEMA recognizes and shares concerns about flood insurance affordability,” Mr. Maurstad said, adding that rates for some people would fall under the new system and stay the same for others. “The number of policies that will see large annual increases is a minority of all policyholders.”

Any jump in costs for current customers would be spread out over years or decades, because Congress prevents FEMA from raising individual homeowners’ premiums by more than 18 percent annually. So even if FEMA’s new system meant that ultimate rates doubled on paper for some people, those who already had coverage would be protected from paying the full increase all at once.

But when a home that’s covered by flood insurance changes owners, the new buyer must pay the full rate right away. So big increases in flood insurance rates could scare off buyers for flood-prone homes, reducing their value or even making them hard to sell.

“We want people to know the risks they face,” said Rebecca Elliott, an assistant professor at the London School of Economics and Political Science and author of a book about flood insurance and climate change. At the same time, she said, many people rely on steady or rising home values as the foundation of their financial health.

Previous efforts to increase flood insurance rates have been delayed or rolled back in the face of public pressure. In 2012, Congress passed a law that would have brought rates in line with the full risk people faced; two years later, lawmakers backed down, replacing those changes with more modest increases.

FEMA’s new flood insurance system has prompted similar concerns. The new rates were initially supposed to take effect last October, but members of Congress warned FEMA about the effect that increases would have on their constituents. The Trump administration delayed the new rates until this year, worried in part that increasing premiums shortly before the election would hurt President Trump politically, according to a person familiar with the discussions.

The agency could theoretically find ways to further blunt those rate increases, according to Roy Wright, who ran the insurance program until 2018. For example, FEMA could decide that insurance premiums should be tied to a structure rather than a homeowner, so that annual limits on price increases would still be in effect even if the house changed owners.

And experience suggests that home values keep increasing in the most desirable coastal areas despite rising insurance costs, Mr. Wright said, because people’s desire to live near water is often unaffected by whether it makes financial sense.

“Is it going to depress property values?” said Mr. Wright, who now heads the Insurance Institute for Business & Home Safety, a research group. “In attractive real estate markets, we haven’t seen that.”

Eli Lehrer, president of the R Street Institute, a research organization in Washington that advocates for market-based policies, said the government could not ignore the financial burden facing people who already live in flood-prone homes.

But rather than shielding those people by keeping insurance rates low, Mr. Lehrer argued that Congress should offer direct subsidies, and only for people with modest incomes who would otherwise struggle to stay in their homes. Everyone else, he said, should face the full cost of the risk they face.

“We’ve been subsidizing people to live in areas that were dangerous when they moved there, and have become more dangerous,” Mr. Lehrer said.