Home » World News » COMMENTARY: How do geese know when to fly south for winter?

To be ready to migrate in the fall, geese start preparing in midsummer. Babies born in the spring are mostly grown up by then. Adult geese grow a new set of plumage after shedding their old feathers — a process called moulting.

They need flight and body feathers to be in good condition for the long flight ahead, and to insulate their bodies from the winter cold. For a few weeks during this process, geese can’t fly at all, and they stay out on the water to avoid predators.

Geese have a clock in their brain that measures how much sunlight there is each day. The days grow shorter during the late summer and early fall, and that’s how geese know it’s time to get ready for the journey south. Families join together in larger flocks. Geese gorge on grains and grasses to fatten up in preparation for their journey. 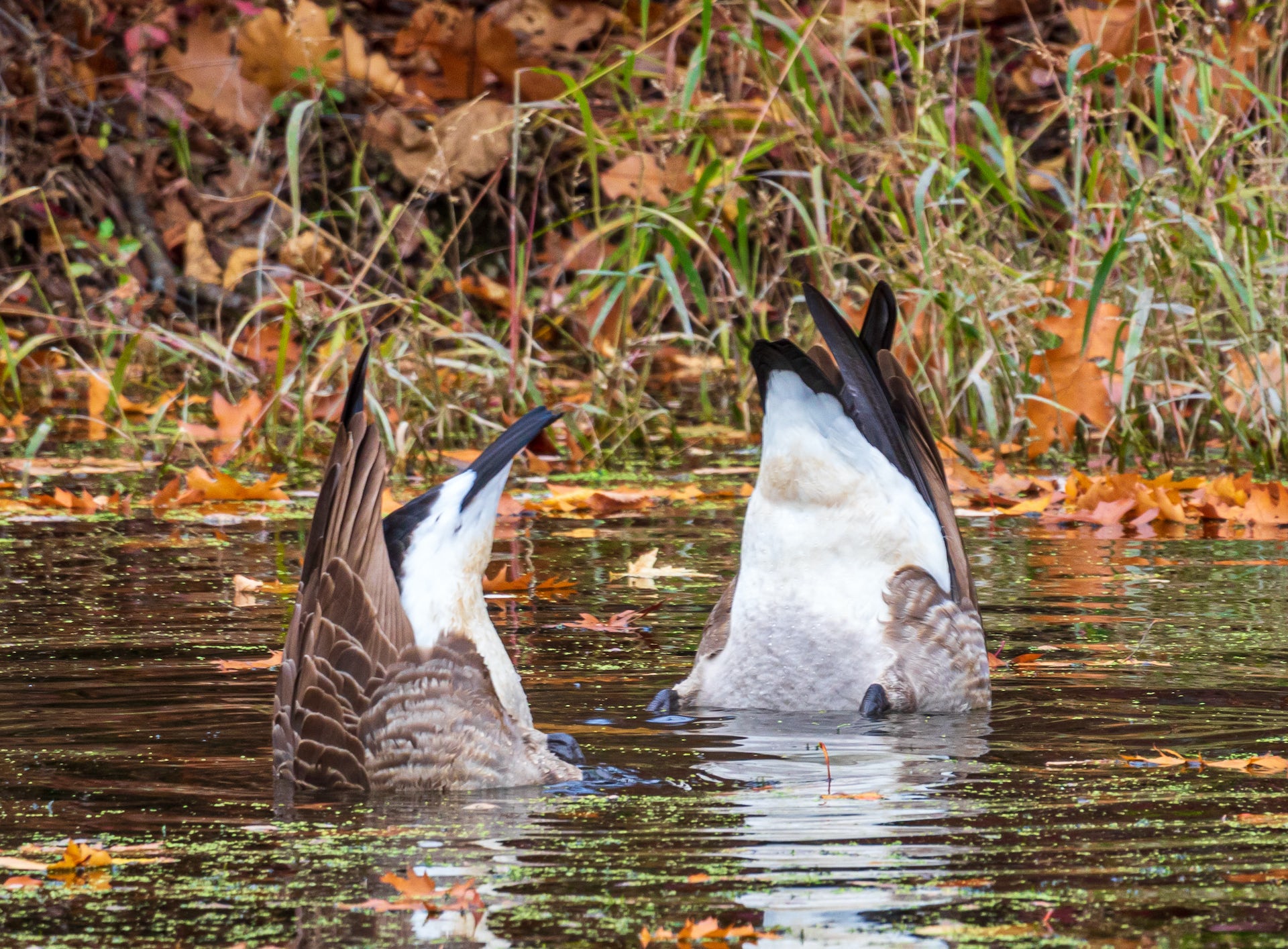 When it’s time to go

There are two different types of bird migration. For most bird species that migrate from temperate climates to the tropics in winter, migration is instinctual. These birds, such as swallows, orioles and warblers, leave their northern breeding place before the weather turns harsh and food becomes scarce.

Most migrate at night, individually rather than in flocks, and they know where to go and how to get there without guidance from parents or other birds. They migrate continuously, except for short stopovers to fuel up on insects, fruit, or seeds before continuing on their way.

Canada geese and other migratory geese species are different. They usually remain in their summer range until the weather is cold, water starts to freeze, and food gets hard to come by. Once conditions become so tough that they can’t find enough to eat, geese migrate.

Maybe you’ve observed flock members signalling they’re ready to go: They honk loudly and point their bills toward the sky. Single families of geese, or flocks of several families together, take off and head south. Flocks join with other flocks. Geese fly by day or night, depending on factors like weather conditions or the brightness of the moon.

Geese navigate based on experience, using landmarks including rivers, coastlines and mountain ranges. They may also use celestial cues such as the sun and stars. Geese have a physical compass in their head that allows them to tell north and south by detecting the Earth’s magnetic field.

Young geese learn the migration route and landmarks by following their parents and other experienced geese. People who have raised and socially bonded with geese have even taught the birds new migration routes by leading them in an ultralight aircraft — as in the movie “Fly Away Home.” 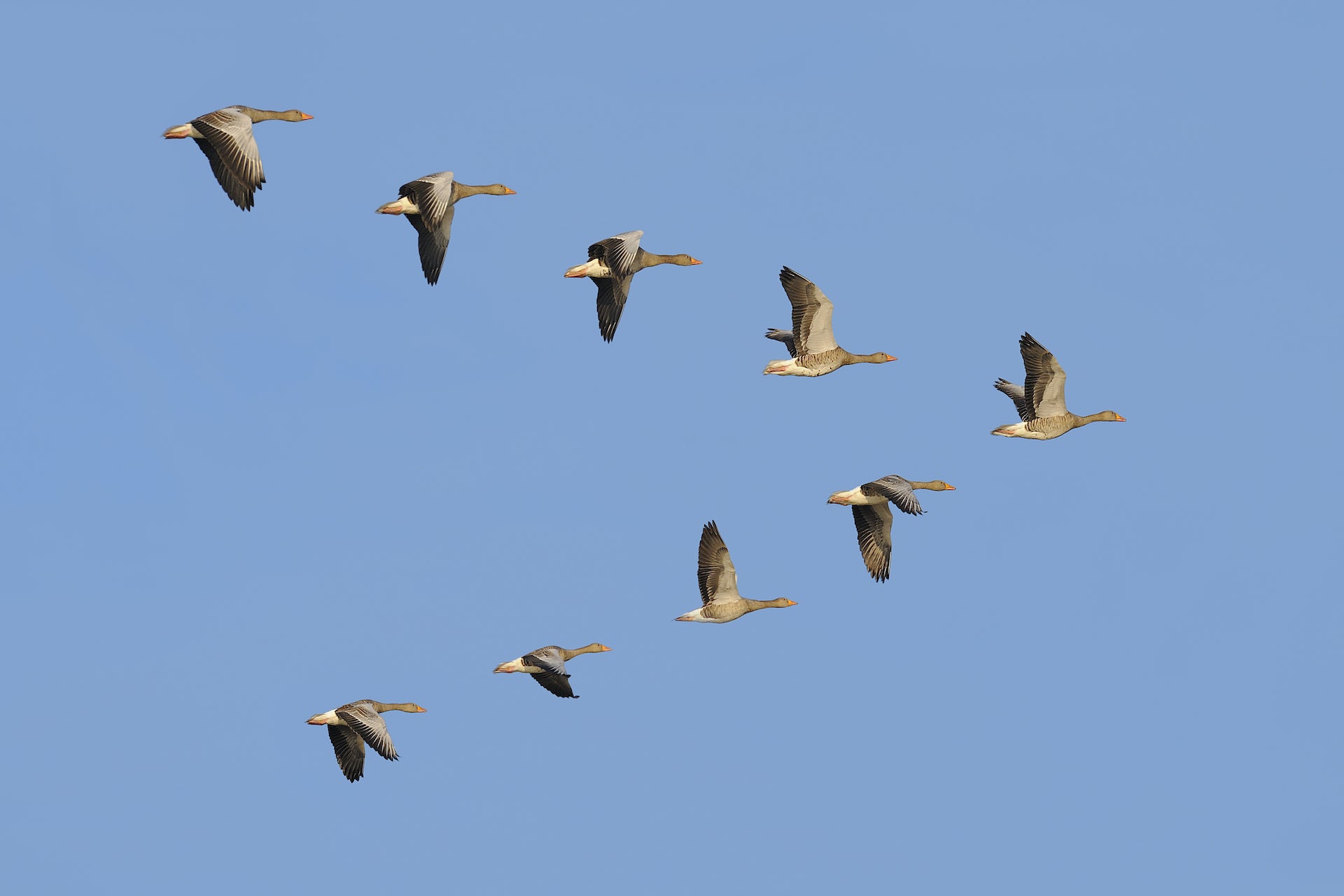 In addition, they have another energy-saving trick. To reduce drag and to receive a little extra lift, geese fly close behind and about one wing length to the side of the one immediately in front. When all flock members do this, the familiar V-shape appears.

This form of drafting, also called vortex surfing, saves a lot of energy. Following another bird at the right distance blocks any headwind. The flapping of the bird ahead creates a forward movement of air called a slipstream, which helps pull the trailing bird forward. And little pockets of spinning air, called vortices, produce lift that helps keep a trailing bird aloft. The same physics explains why fighter jets fly in V formation to conserve fuel.

The bird at the point of the V, in the front of the flock, gets no advantage from drafting. It is working much harder than the others. When it gets too tired, it drops back and another takes the lead. Recently, ornithologists have discovered that when families migrate together as a flock, the parents take turns at the tip of the V. The younger geese, which are not as strong, line up along the V behind the lead parent.

Most geese that breed in a particular region will migrate along similar routes, called flyways. For example, geese that pass by my house in Northern New York follow the Atlantic flyway. They’ll end up on the Atlantic Coast and migrate south following the shoreline.

Rather than migrate nonstop to their wintering grounds, many geese travel in stages, pausing at traditional stopover sites to rest and regain lost fat. Geese from the most northern populations travel to the farthest south. More southerly breeding populations don’t migrate as far. This is called leapfrog migration, since the northern geese literally fly over the more southern birds. Why this happens is a bit of a mystery, but it’s possible the northern breeders continue further south to avoid competing for food with southern geese that have already found good wintering conditions closer to their summer homes.

Because geese learn migratory routes, they can flexibly adjust where they go as conditions change. Goose migration stopover sites and wintering grounds have shifted, for example, because of changes in farming practices, availability of lawns and golf courses, and other changes in land use. Migratory geese are now adjusting when and where they migrate as a consequence of global climate change. And some groups of Canada geese have decided to just stay put and skip the migration altogether.

This article is republished from The Conversation under a Creative Commons license. Read the original article.