An entire city of nine million people in China will be tested for COVID-19 in just five days after a small number of new cases emerged.

People in Qingdao have been joining long queues for test centres following the confirmation of 12 infections, mostly linked to a hospital in the city, the state-run Global Times newspaper reported.

Qingdao Chest Hospital, which treats coronavirus patients who have returned from overseas, has been locked down along with buildings where the infected individuals live. 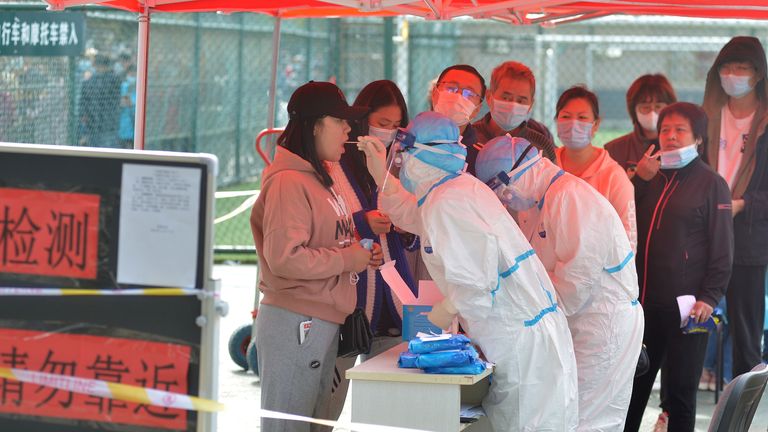 Testing points are reportedly remaining open as late as 11pm to ensure medical teams can complete their work.

Qingdao’s new infections came shortly after China had completed its Golden Week holiday, during which millions of people travel domestically to meet up with families.

In May, the authorities tested nearly all of the 11 million people in Wuhan – the city where COVID-19 first emerged at the end of last year.

There have also been mass testing schemes in Beijing and Urumqi.

Daily infections in the country have fallen sharply from peaks early this year.

However, China remains on high alert to avoid further lockdowns, which previously led to a large decline of the world’s second biggest economy.

According to latest figures compiled by Johns Hopkins University, the number of confirmed COVID-19 cases in China stands at 90,812. The death toll is 4,739.

The country has continued to deal with a number of cases involving travellers arriving from overseas, but the last time there were reports of virus transmissions in China was in August in Urumqi.

Travellers arriving from abroad in China still are required to undergo a 14-day quarantine.