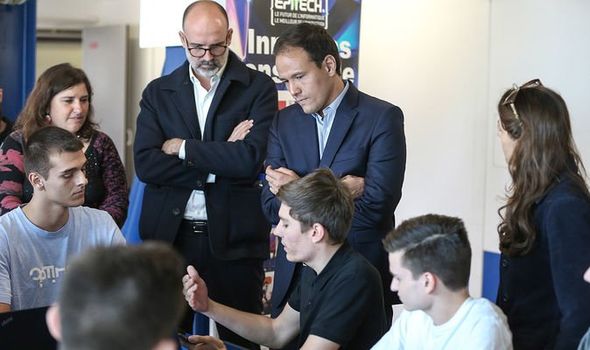 M Mahjoubi, from M Macron’s La République en Marche (LREM) party, told France Inter radio: “The sole objective of contact tracing is to save lives. No one should stand against a tool designed to save lives. And even if the app is used by a minority of the French, it will still help slow the outbreak.”

When asked about the impact of tracing technology on civil liberties, he added: “Firewalls will be put in place to protect individual freedoms.”

France, which has entered the fourth week of a lockdown imposed to restrict the spread of the disease, is working on a smartphone app that could warn users if they come into contact with a coronavirus carrier.

M Mahjoubi’s successor, Cédric O, told newspaper Le Monde in an interview: “In the fight against the new coronavirus, technology can help.

“Nothing will be decided without a broad debate.”

The minister said the government was working on a project called “StopCovid” that could see the use of a proximity-tracking, bluetooth-based app that users would download on their mobile phone on a voluntary basis.

But its effectiveness would depend on people voluntarily using the app to record the fact they have tested positive.

The app would then notify those who have been in close contact with that person that they have been near someone who has the virus.

M O said: “The application would simply inform you that you have been in contact in the previous days with someone who has tested positive.”

He added a task force had been working on a prototype for several days.

The app would only use bluetooth and not geolocation, he continued, and would not track a user’s movements.

Data recorded would be anonymous and deleted after a certain period.

He added: “We should not start a mind-trip over how repressive an application it would be.

“Our scenario is one of a voluntary tool that could be deleted at any time.

“Nobody will have access to the list of contaminated people and it’ll be impossible to know who contaminated who.”

French law bans individual smartphone tracking, unlike China, Taiwan and South Korea, where smartphone location readings are used to trace the contacts of people who have tested positive or to enforce quarantine orders.

French health officials shared some positive coronavirus data later on Wednesday, but the presidential palace said nonetheless that the drastic lockdown measures aimed at containing the disease would be extended.

The nationwide confinement in place since March 17 has already been extended once and will now go beyond April 15, M Macron’s office said.

The number of people who died from coronavirus infections in French hospitals climbed by 8 percent in a day – versus 9 percent on Tuesday and 10 percent on Monday – to a cumulative total of 7,632, health chief Jerome Salomon told reporters.

But he stressed the day’s tally was incomplete because, due to technical issues, authorities were unable to register nursing home data, which account for more than 30 percent of fatalities.

The total death toll, including Tuesday’s nursing home figures, is up 5 percent at 10,869.

M Salomon also noted that the rate of new admissions in intensive care units, almost flat at 0.2 percent, had decelerated for a ninth consecutive day.

“It’s an important indicator. But the pressure on hospitals remains extremely high,” he said.