Life turns upside down in Gulf region as more than 870 COVID-19 cases are recorded across six GCC nations. 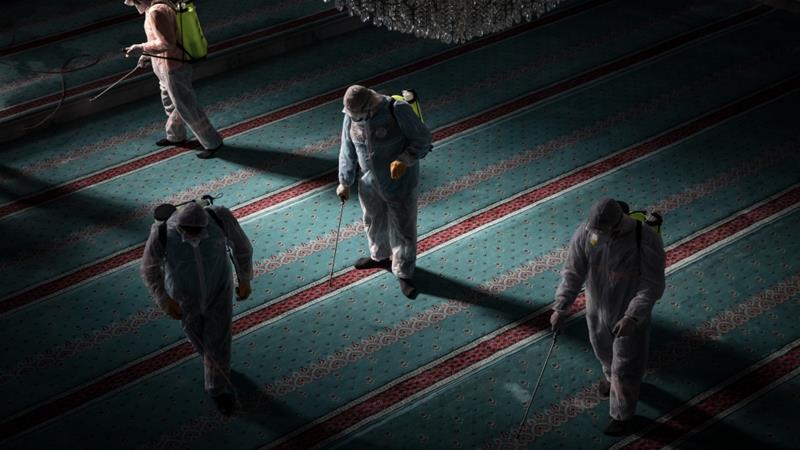 No shisha sessions, deserted streets, mosques and shopping malls, drones in the sky broadcasting public health warnings – the new coronavirus has turned life upside down in the Gulf societies.

More than 870 cases of COVID-19 have been recorded so far across the six nations of the Gulf Cooperation Council (GCC), but so far no deaths related to the virus have been reported.

Most of those infected have been people returning from nearby Iran, where more than 700 people had died in the outbreak by Sunday.

Kuwait has taken the most drastic measures in the GCC by largely locking down the country over the weekend, the only nation other than Italy to do so.

Kuwait City’s main airport road was empty as all commercial flights to and from the small Gulf nation had been suspended.

Drones in the skies were sounding messages in multiple languages, urging people to return to their homes.

In Qatar’s capital, Doha, the usually bustling market in the heart of the tourist centre was eerily quiet, while Riyadh’s shopping district also lay barren.

The Gulf countries have shut down cinemas and other entertainment centres – some even closing gyms and spas – as well as halting one of the region’s favourite pastimes, smoking shisha in cafes.

Residents in the Omani capital of Muscat told AFP there had been much “fear and panic” over what many of them have termed “coronaphobia” at a time when a small bottle of disinfectant is in almost everyone’s pockets or bags.

They said many people have stopped shaking hands or kissing each other on the cheeks, a common greeting across the Arab world.

What if the other person puts their hand out first?”

Meanwhile, the UAE and Qatar have advised their citizens to stop the traditional “nose to nose” greeting, with Abu Dhabi instructing residents that a wave would suffice.

Measures to combat the spread of the virus have also affected the way many Muslims in the Gulf worship.

After Saudi Arabia suspended the Umrah year-round pilgrimage, it advised residents against praying in mosques if they have any symptoms of the virus.

Kuwait took additional steps and banned all mass prayers, an unprecedented move in a country where hundreds of thousands pray side-by-side every day.

“Pray at home, pray at home,” an imam preached in a recording that went viral on social media on Saturday.

In the Sunni Muslim-dominated Gulf, there are hundreds of thousands of Shia Muslims, many of whom travel to Iran regularly for pilgrimages.

Despite continuing tensions between some GCC countries and Tehran, there have been no reports of heightened social friction between the different sects.

This comes amid Saudi Arabia’s decision to cordon off the mainly Shia district of Qatif, where the majority of coronavirus cases were reported.

“This is a time for unity locally, regionally and globally,” Zainab Abdul Amir, a Bahraini parliamentarian, told AFP.

“There is no room for hatred, anger, discrimination or sectarianism.”

In regional tourism and business hub Dubai, there was a rush to supermarkets with many shoppers wearing masks and gloves, as the emirate joined the UAE capital Abu Dhabi in closing cinemas, arcades, spas, gyms and parks.

The Abu Dhabi Securities Exchange said on Sunday it was closing all its trading halls until further notice, a day after Kuwait’s bourse said it would do the same.

Kuwait and Saudi Arabia have taken the most drastic steps among Gulf Arab states by halting international passenger flights.

An American living in the Saudi capital Riyadh said his parents – in their 60s and 70s – cut short their visit and departed on Saturday before the kingdom’s two-week international flight suspension went into effect at 08:00 GMT Sunday.

Kuwait, where the flight ban began on March 13, has offered its citizens stranded at London’s Heathrow Airport paid accommodation at an airport hotel with three meals a day, according to an embassy notification seen by Reuters News Agency.