Staff should work from home if bosses believe there is a serious risk of infection. 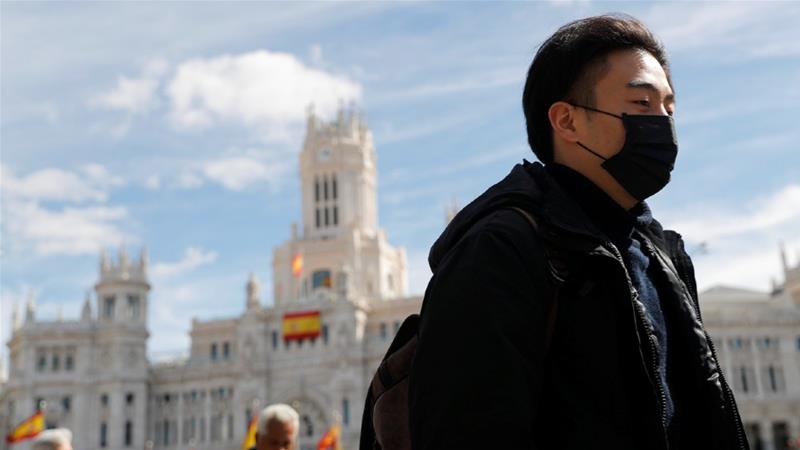 Madrid, Spain – The Spanish government has advised companies to close and send staff to work at home if there were a “serious” risk to workers of contracting coronavirus, as authorities on Thursday reported the third Spanish death from COVID-19.

Yolanda Diaz, the employment minister, has issued a guide to firms, insisting they should stop work if bosses believed there was a “serious, imminent and inevitable” risk of infection to workers if another staff member had been diagnosed with the virus.

Companies which have to close temporarily may be excused from paying staff social security contributions to the government, according to the guidelines.

The move came as Banco Bilbao Vizcaya Argentaria, Spain’s second-biggest lender, transferred 100 staff from its trading floors in central Madrid to offices on the outside of the Spanish capital under contingency plans.

However, business groups on Thursday accused Spain’s left-wing government of feeding fears by advising companies to close or send their staff home.

Antonio Garamendi, president of the Spanish Confederation of Business Organisations, told Al Jazeera: “We think that the government has made a serious error by putting out a guide which causes a scare and confusion. It does not correspondent to the real threat of the virus according to the health ministry.

“Companies and unions have not been consulted and it has been put out for political reasons.”

A spokesman for the Spanish government also appeared to undermine the statement of the employment minister, saying: “The advice concerning the coronavirus should only come from the ministry of health.”

Meanwhile, a 99-year-old woman in Madrid became the third victim of the virus in Spain, as the number of cases across the country rose to 234.

A 69-year-old man was at first thought to have died from pneumonia on February 13, but after tests were carried out, it was confirmed that the cause was coronavirus.

An 82-year-old man from the Basque Country in northwestern Spain, who had been suffering from chronic illness, died on Wednesday after contracting the virus.

Health authorities in Valencia, in southeastern Spain, were on Thursday investigating if the death of two more people in February were caused by the coronavirus.

All medical staff in Madrid have been told by the regional government not to go to any meetings, so as to minimise the risk of spreading the virus.

Across Spain, the government has also advised police and air traffic controllers to avoid all meetings unless they are in the open air, and not to have contact with people who have travelled to high-risk countries such as China or Italy.

Jose Maria Molero, of the CSIT union of professional health workers in Madrid, told Al Jazeera: “It is obviously a good thing to advise doctors, nurses and auxiliary workers who may have had contact with patients who have the virus from going to meetings and spreading the virus.

“However, we think that these guidelines should be more clearly defined because some staff, like radiographers or surgeons, who do not have any contact with patients, may find their work is curtailed.”

Schools across Spain remain open. However, it was reported in Catalonia that in some schools, parents are offering to home school their children.

Marches planned in cities across Spain to celebrate International Women’s Day (March 8) on Sunday are still going ahead, organisers said.

However, there were signs that public opinion was in favour of cancelling public gatherings and closing schools.