Every province and city in Vietnam is at risk of a new wave of COVID-19, its prime minister has warned, as territories across Asia suffer a spike in new infections.

Vietnam had been coronavirus-free for months before the recent outbreak in Da Nang, a city in the centre of the country.

Cases have now also been reported in other cities, including Ho Chi Minh city and the capital Hanoi.

Prime Minister Nguyen Xuan Phuc said that this coronavirus strain had not been seen in the country before, and some local media reported that the new strain was more contagious than previous ones. 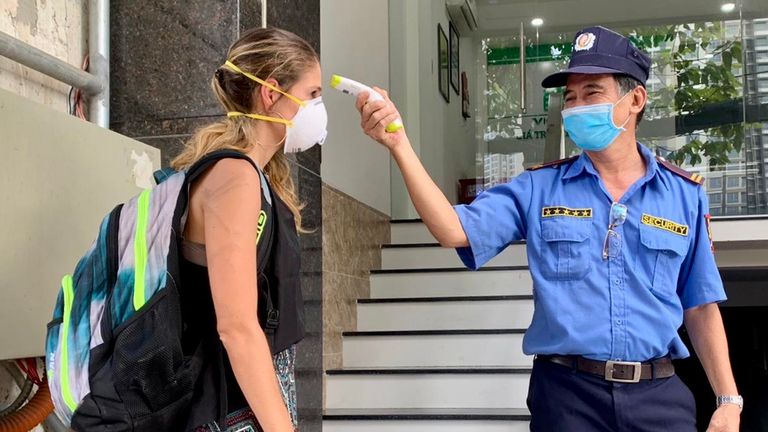 Vietnamese scientists say the latest strain had also been previously detected in Bangladesh, Britain and Ireland.

Despite sharing a border with China, Vietnam had only recorded 446 cases in the initial stages of its COVID-19 outbreak. It rapidly shut its borders, imposed centralised quarantines and started an energetic contact tracking system.

It has acted similarly quickly in this outbreak. All flights in and out of Da Nang have been suspended and 80,000 mainly local tourists are being evacuated. Social distancing rules are being imposed and non-essential services are being told to close.

Numbers are on the rise elsewhere in Asia. China recorded 101 cases of coronavirus on Wednesday as it deals with outbreaks in Dalian, a port city in the north east, and Xinjiang, the territory in its far west which is home to the Uighur people. Targeted lockdowns have been imposed and mass testing has been carried out.

And Hong Kong’s leader Carrie Lam warned the territory was “on the verge of a large scale” outbreak, one which could lead to the “collapse” of its hospital system.

This week the city recorded a new daily high of 145 COVID-19 cases.

Like Vietnam, Hong Kong initially contained the virus but is now experiencing what it characterises as a third wave.

Only two people from different households are allowed to meet in public.