Teams sent to disinfect nursing homes found elderly residents abandoned, and others dead in their beds. 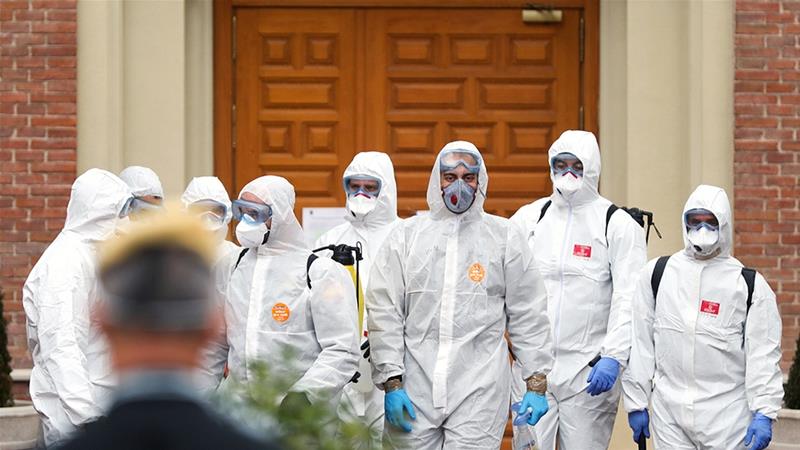 Margarita Robles, the Spanish defence minister, on Tuesday said troops who had been sent to sanitise rest homes had on Monday found the corpses of elderly people, and other residents left to their own fates.

Prosecutors will decide if there are charges of negligence to be answered to.

The investigation comes as reports showed the pathogen was spreading across a wider geographical area in Spain than in Italy where it is mainly concentrated in three regions.

After China and Italy, Spain has the highest number of cases of coronavirus with 39,673, health authorities said on Tuesday.

The virus has now killed 2,694 people in the country. On Tuesday, Spain announced the highest increase in deaths in a 24-hour period, with 514 more people losing their lives – an increase of 19 percent on the day before.

In an interview with Telecinco, a Spanish television channel, Robles said: “We are going to be strict and inflexible when dealing with the way old people are treated in these residences.

“The army, during certain visits, found some old people completely abandoned, sometimes even dead in their beds.”

The Spanish army and navy have been asked to help disinfect retirement homes across Spain.

Dozens of deaths have been recorded at residential homes across the country.

In Madrid, mortuaries are so full that authorities have been forced to store bodies in an ice rink.

“When I heard this news from the minister I was horrified,” Ignacio Fernandez-Cid, president of the Federation of Residential Home Companies, told Al Jazeera.

“We have been told that the funeral services are so overloaded that they may not be able to come to collect bodies straight away, so the best thing to do if a person is in a room on their own is to leave their body in the bed to avoid the risk of contamination. It may be the case that this has happened.”

His father had been staying at the Monte Hermoso residential home, where 20 elderly people died from the virus last week.

“My father may die at any time. He is very frail. There have been so many people who died in the home where he was staying. It does not surprise me that they are leaving bodies. This is out of control,” he told Al Jazeera.

Salvador Illa, the health minister, said retirement homes were “an absolute priority for the government”.

“We will exercise the most intensive monitoring of these centres,” he said in a statement.

Under the government’s coronavirus guidelines, health workers have been instructed to leave bodies in place until the arrival of a doctor.

However, with many hospitals overwhelmed by cases, these delays can be lengthy.

Meanwhile, epidemiologists said the number of cases had doubled in the past three days in Spain, a phenomenon not seen in China or Italy.

About 80 percent of all cases in Italy have been recorded in three regions, Lombardy, Veneto and Emilia-Romagna, while in Spain the pathogen has spread from the main focus in Madrid, La Rioja and the Basque Country to three other regions.

Analysis also showed that the number of cases in Madrid may soon exceed that of Lombardy, one of the three regions in northern Italy which has the most cases.

Pere Godoy, president of the Spanish Epidemiology Society, told El Pais newspaper: “I think it was a mistake to allow the large geographical dispersion that took place in the days prior to the introduction of isolation, something that could have facilitated the dispersion of the virus.”