Fifteen people have been arrested after protests broke out in the Netherlands over a newly-imposed COVID-19 lockdown.

Hundreds of people gathered in the Dutch city of Leeuwarden on Saturday night, where videos showed them setting off fireworks and holding flares billowing smoke.

The Northern Netherlands Police Unit said a number of people refused to leave after they called on everyone to return home.

Dutch broadcaster NOS reported that riot police later moved in to push the protesters off the city’s central square. 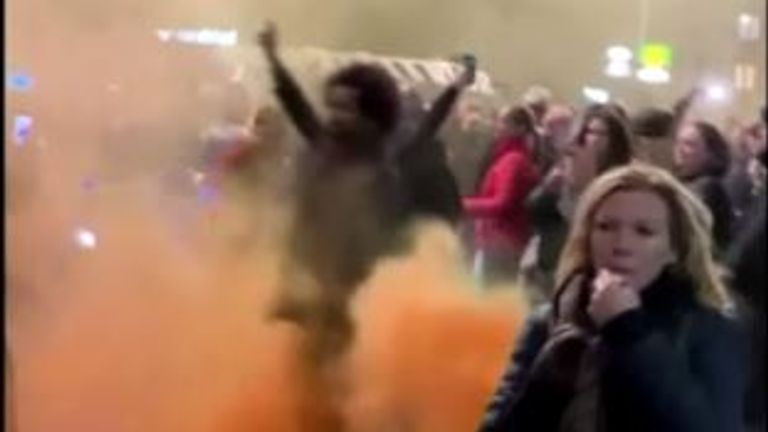 Police said on Twitter that officers are continuing to monitor Leeuwarden, which is around 85 miles north of Amsterdam.

Elsewhere in the Netherlands, local media reported that bars in the southern city of Breda remained open beyond the new mandated closing time.

Under the new three-week COVID-19 lockdown, bars, restaurants and supermarkets have to close at 8pm and stores selling non-essential items are required to shut at 6pm.

Professional sports matches have been forced to play in empty stadiums and people are being urged to work from home as much as they can.

Social distancing measures have also been reintroduced as part of the lockdown, which is the first in Western Europe since a new wave of infections began surging across parts of the continent.

After the partial lockdown was announced on Friday, demonstrators also gathered in The Hague, where they were seen letting off smoke bombs in protest of the measures.

The Netherlands has recorded a total of 2,309,626 COVID-19 cases since the start of the pandemic, along with 19,138 deaths, according to Johns Hopkins University data.

Nearly 85% of the Dutch population is fully vaccinated against the virus.