France is considering imposing “slightly tougher” health measures for travellers from Britain due to the Indian variant, the French foreign affairs minister has said.

“We worry about the Indian variant and we remain on high alert regarding that matter, in co-operation with British authorities,” Jean-Yves Le Drian told RTL radio.

He said the UK could be put in a health category of its own, somewhere in between the strictest measures imposed by France on visitors from India and 15 other countries, and more relaxed requirements for visitors from the EU and some other nations. 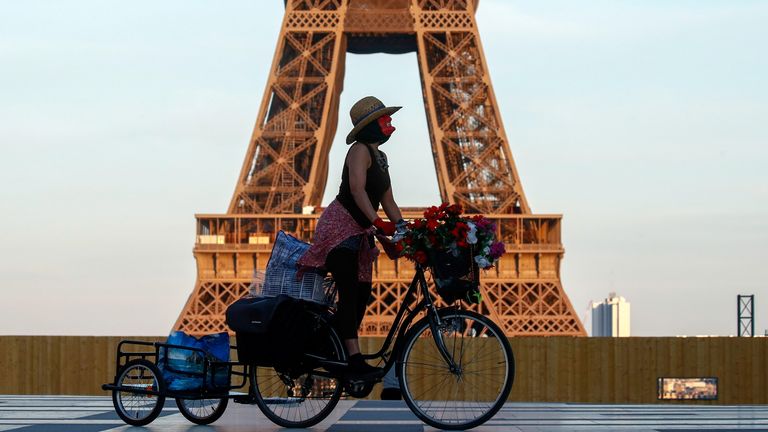 Mr Le Drian indicated the French government is watching how the situation develops before making a decision.

“We hope that the variant can be controlled in a country which experienced real failures during the pandemic,” he said.

“However, the arrival of the Indian variant and the increase of cases of Indian variant in the United Kingdom pose a problem and so we are vigilant about this (and) in contact with the British authorities.

“It won’t be the red treatment if we have to do it. It will be an intermediate treatment.

“But we are not excluding – this springs to mind because of British tourists – having health measures that are a bit stronger.”

Currently, British people travelling to France need to present proof of a negative PCR test taken less than 72 hours before departure and fill in a health declaration form committing to self-isolate for seven days and take a second PCR test.

France is on the UK’s “amber” list, with ministers saying people should only travel there if necessary, but Transport Secretary Grant Shapps said he was optimistic it would be placed on the green list later this year.

Talking about reviewing the list, especially for holidays, he told the FT: “If you look at France’s vaccination rate, they’re six or eight weeks behind us.”

However, France could put a stop to holiday plans if even stricter isolation plans apply to British travellers.

Meanwhile, Spain says it will allow Britons into the country from Monday without a negative COVID-19 test.

However, the UK government also considers Spain an amber list nation and is advising against travel there unless it is essential.

People who return to England from amber list countries need to isolate at home for 10 days and have COVID tests on day two and day eight.

The Indian variant has become the dominant strain in parts of the UK, with a 160% rise in cases over the week. Surge testing has been deployed in areas including Bolton, Bedford and parts of west London to try to subdue the variant’s spread, which has successfully happened in Sefton.

A PHE study found the Pfizer vaccine is 88% effective against the Indian variant after two doses and the AstraZeneca is 60% effective, providing a better picture than originally thought.

The app will include a “health pass” people can use to attend sports events, festivals and theme parks as it will provide proof a person has either been vaccinated, tested negative recently or is recovering from COVID-19 so has natural antibodies.

The EU reached a deal on Thursday to allow tourists to use COVID-19 certificates across the 27-nation bloc from 16 June.

Because the UK is no longer in the EU, it is not part of the programme, but the UK has launched vaccine certificates on the NHS app.

Germany has already imposed stricter rules for British travellers in response to the spread of the Indian variant.

People arriving from the UK now have to quarantine for 14 days – although Germany remains on the UK’s amber list.