During a forum with voters, the Democratic presidential nominee cast President Trump as a callous leader who had failed the nation during the pandemic.

Israel is preparing to celebrate the holiest of days on the Jewish calendar under a fresh lockdown.

Here’s what you need to know: 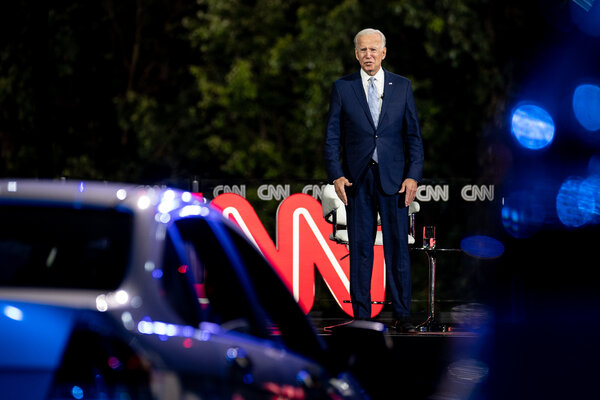 ‘You lost your freedom because he didn’t act’: Biden tries to focus the campaign on Trump’s virus response.

Appearing on CNN at a town-hall-style event less than two weeks before the first presidential debate, Mr. Biden cast the president as a callous leader and chided Attorney General William P. Barr for suggesting that local stay-at-home mandates were the greatest threat to individual freedoms since slavery.

At other turns, Mr. Biden pointed to revelations from a new book by the journalist Bob Woodward that the president knowingly minimized the risks of the coronavirus, and added to his earlier warnings that Mr. Trump had politicized the rollout of a vaccine.

“I don’t trust the president on vaccines,” Mr. Biden said at the town hall near his childhood home of Scranton, Pa., as audience members listened from their cars. “I trust Dr. Fauci,” he said, referring to Dr. Anthony S. Fauci, the director of the National Institute of Allergy and Infectious Diseases. “If Fauci says a vaccine is safe, I’d take the vaccine.”

Mr. Biden also said that he could not enforce a national mask mandate everywhere, breaking with a position he had taken a day earlier. But he asserted that he would have the authority to do so “on federal land.”

Many states require the use of masks and have issued stay-at-home orders to slow the spread of the virus. Earlier this week, Dr. Robert R. Redfield, the director of the Centers for Disease Control and Prevention, suggested that masks might be more effective in fighting the pandemic than a vaccine — only to have Mr. Trump call his statement a mistake.

In a statement, Tim Murtaugh, a Trump campaign spokesman, said that Mr. Biden should have received more scrutiny of his plans and his record on matters including the economy.

Mr. Biden’s appearance, his biggest on a national stage since he accepted the Democratic nomination last month, came on the same night that Mr. Trump announced about $13 billion in assistance to farmers at a campaign rally in the battleground state of Wisconsin.

More than 2,200 new cases were announced in Wisconsin on Thursday, a single-day record, according to a New York Times database, and the state has added more cases in the past week than in any other seven-day stretch of the pandemic. Senator Ron Johnson of Wisconsin canceled plans to travel to his home state with Mr. Trump and appear at the rally, saying that he would self-isolate for two weeks after coming into contact with an infected person.

The former aide, Olivia Troye, played a central role in running the White House’s coronavirus task force until leaving the government last month. In an online ad, she said she was voting for Mr. Biden because she believed the nation was in a “constitutional crisis” and that “at this point it’s country over party.”

Mr. Pence fired back from the White House.

“I haven’t read her comments in any detail,” he said on Thursday. “But it reads to me like one more disgruntled employee that has decided to play politics during an election year.”