The president said at a town-hall-style event that the virus would disappear on its own and that the U.S. was “rounding a corner,” a view at odds with those of public health officials.

An experimental drug is showing promise in reducing blood levels of the virus for newly infected patients.

Here’s what you need to know: 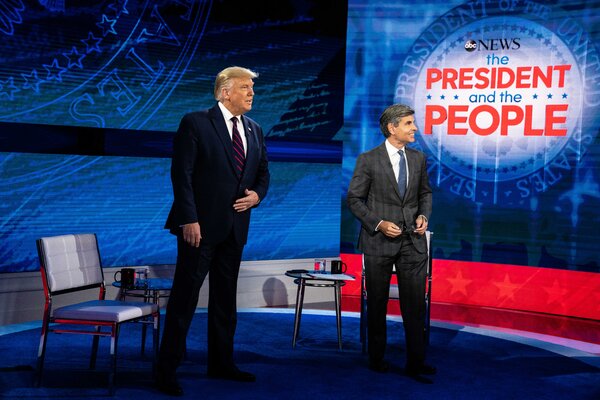 ‘I feel that we’ve done a tremendous job’: Trump defends his response to the pandemic while again making inaccurate claims.

President Trump denied on Tuesday that he had downplayed the threat of the coronavirus, directly contradicting his own recorded words from earlier this year in which he admitted doing just that.

“I didn’t downplay it,” he said at a town-hall-style event in Philadelphia, which came two weeks before the first of his three debates against the Democratic nominee for president, Joseph R. Biden Jr. “I actually, in many ways, up-played it in action.”

Then Mr. Trump downplayed it again, insisting that the virus would disappear on its own, and contending that “we’re rounding the corner” of a crisis that has taken more than 195,000 lives in the United States — views radically at odds with those of public health officials.

Earlier this year, Mr. Trump told the journalist Bob Woodward privately that the virus was “deadly stuff” even as he was telling the public that it was akin to the average flu. “I wanted to always play it down,” he told Mr. Woodward in a recorded conversation that was made public in recent days. “I still like playing it down, because I don’t want to create a panic.”

On Tuesday, the president said that a vaccine could be ready in “several weeks,” despite warnings by federal officials that it will take much longer, and repeated several unsupported claims about his administration’s response to the virus.

For example, he repeated his characterization of restrictions placed on travel from China and Europe as “bans” that saved “thousands of lives.” But the restrictions only applied to foreign nationals and included exceptions, ultimately allowing 40,000 people to travel from China to the United States from the end of January to April.

Mr. Trump also said the coronavirus “goes away” even without a vaccine.

Herd immunity (not mentality) depends on enough people getting sick that a broad immunity is developed against the virus, but experts said it would result in many more deaths.

The president’s 90-minute appearance at the forum broadcast by ABC was one of the few instances during this campaign season when he has faced voters who were not already his committed supporters and a rare open-ended encounter on a network other than on his favorite, Fox News. From the start of the event in the National Constitution Center in Philadelphia, he seemed defensive about his handling of the coronavirus and sought to change the subject to more comfortable terrain.