Thousands of demonstrators in Paris were met with water cannon as protests against a new privacy law attracted larger crowds keen to air their grievances over coronavirus restrictions and France’s slow vaccine rollout.

Riot police were deployed alongside the cannon to clear the Place de la Republique in the centre of the capital just before 6pm local time, when a curfew kicks in each day.

The protest started peacefully, but as the sun set, tempers on both sides of the police cordons flared. 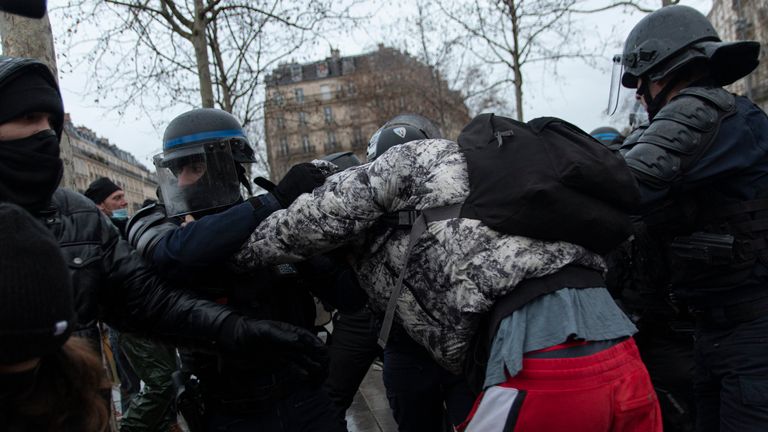 Sky’s Europe correspondent Adam Parsons, reporting from the scene, said that “for a few hours, it was a very good natured affair, almost like a festival”, as a march of around 6,000 people unhappy about a proposed surveillance law culminated at the Place de la Republique.

The surveillance law restricts the ability of people to post pictures of law enforcement officers online, something which campaigners say will reduce accountability of the police.

But Parsons said the demonstrations “became a sort of calling card for all sorts of grievances, including those unhappy about how the French government has handed the pandemic and the vaccine rollout”.

That also included new rules announced on Friday evening regarding travel and movement in and out of France.

Shopping centres are being closed, police ordered to step-up checks, and the country’s borders are being shut.

These measures were introduced to head off a potential third full lockdown, something which the country’s scientific advisers said last week was going to be necessary as soon as February.

France, like other parts of Europe, is trying to deal with the revelation that the number of vaccine doses being delivered to the European Union will be lower than expected due to problems with production.

The resulting row with AstraZeneca has left the EU and its constituent countries in a delicate position following days of back and forth between the pharmaceutical giant and its clients.

French President Emmanuel Macron then made unsubstantiated claims that the company’s vaccine, which was developed alongside Oxford University, was not effective in over-65s.

His comments were disputed by scientists before the vaccine was given regulatory approval by the European medicine regulator. 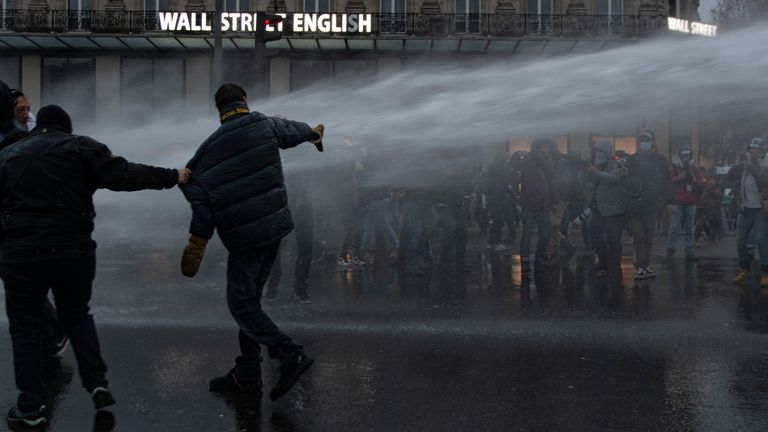 According to Johns Hopkins University’s global tracker, France has had 3,236,685 confirmed cases of the coronavirus, and 76,006 deaths.

The latest figures from France show they have dished out just 1.45 million coronavirus vaccines doses, compared to 8,378,940 first jabs deployed in the UK.

One opinion poll conducted showed more than three-quarters of French people think a third lockdown is now inevitable, with the research also showing falling confidence in the government’s handling of the pandemic.

There is also a general election in just over 12 months, with Mr Macron set for another battle with the far-right leader Marine Le Pen.