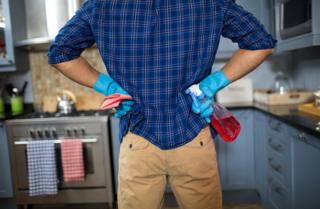 Did Indian men do more housework during the Covid-19 lockdown? Preliminary data suggests they did, but is it enough to say that Indian homes are becoming more gender equal? The BBC’s Geeta Pandey in Delhi reports.

Dr Rahul Nagar, a Delhi-based dermatologist, says there’s always been “a very clear division of labour” in his home.

His wife, also a doctor, did the cooking and was the primary carer for their child. Like most middle-class Indians, they employed a part-time help who did the cleaning and dishes, while Dr Nagar did little bits and pieces.

But then came the pandemic – and as Covid-19 cases began to rise, India went into a strict lockdown and their domestic helper was unable to come to work.

“Pre-lockdown, for every five hours of work my wife did, I did one hour. But this pandemic has been a bolt from the blue,” says Dr Nagar.

“During the first two months of the lockdown, we divided the chores amongst us. My wife being a government doctor couldn’t stay at home and had to work throughout. So, I stayed at home and shared the chores.

“I did the babysitting, attending his online classes, bathing him and feeding him. Throughout the lockdown, I was mopping the floor. I tried my hand at cooking and baking.”

Now with the lockdown relaxed, Dr Nagar says, their help is back and he has started going to his clinic a few days a week, but he is still attending his son’s two-hour-long daily online classes.

“Now my wife and I put in equal number of hours on chores and childcare. We are even-stevens,” he laughs.

Dr Nagar is not alone – data shows that Indian men did more chores in April, the first month of the lockdown, than they had earlier.

Ashwini Deshpande, professor of economics at Ashoka University, compared the data put out by the Centre for Monitoring Indian Economy (CMIE), an independent think tank, for the months of December 2019 and April 2020.

Her estimate shows that the lockdown saw both men and women spend more hours on chores. Of course, women were still doing most of the work, but the increase in the time spent on housework was more for men than for women.

“This meant that the gender gap in average hours spent on domestic work decreased in the first month of the lockdown, nationally as well as across most states,” Prof Deshpande wrote in a paper analysing the CMIE data.

Some of the best-performing states were Delhi, Himachal Pradesh and Tamil Nadu; the worst included Chhattisgarh and Madhya Pradesh.

In India, like in many other parts of the world, the burden of unpaid care work normally falls on women.

According to an International Labour Organization report, in 2018 women in urban India spent 312 minutes a day on unpaid care work. Men did 29 minutes. In villages, it was 291 minutes for women as against 32 minutes for men.

But this gender disparity was brought into sharper focus as couples, and families, were confined to their homes during the strict countrywide lockdown to fight the Covid-19 pandemic.

With few Indian homes equipped with dishwashers, vacuum cleaners or washing machines, all the work has to be done manually and chores are labour-intensive.

So, most families hire domestic help, such as part-time cooks, cleaners and nannies, who play a key role in the smooth running of middle-class and affluent homes.

But as they were unable to come to work during the lockdown, many women complained about how their workload had risen.

Last month, I wrote an article about disquiet within Indian homes over who does how much of the housework after one woman petitioned Prime Minister Narendra Modi to tell Indian men to do more.

Prof Deshpande says the increase in men spending more hours on housework during the lockdown is primarily driven by the recently unemployed – 104 million men lost their jobs in April.

But, she says, in urban households, especially the middle classes, men also had to pitch in due to the absence of the domestic helpers.

The CMIE data is based on a survey of the same set of 43,600 individuals, who were interviewed in December 2019 and again in April.

About 63% of those interviewed were from urban areas while 36.8% were in rural areas; 47% of the respondents were female while 53% were male; they included farmers, daily wage workers and the salaried middle class.

Prof Deshpande says the survey findings are “significant” because it was the same set of men and women who were interviewed pre- and post-lockdown and “this allows us to compare the answers”.

But, she cautions that these findings are preliminary and the data for the subsequent months will have to be studied before it can be said whether the changes are temporary or permanent.

“We won’t know until September when the next set of CMIE data will be available. We can only hope this trend persists.”

There is anecdotal evidence, though, that winds of change that started blowing within our homes in April have continued well into the subsequent months.

Last month, when I was writing about families quibbling over housework, I asked friends and colleagues on social media for their stories about division of labour in their homes.

One woman, Sara Hasan, wrote that she and her partner did chores that they were naturally better at and that they complemented each other’s work. “It’s been quite comforting. Had it been otherwise I wouldn’t have survived the lockdown.”

Another woman, Pallavi Sareen, wrote: “As a child, it was always me who had to do house chores, work in the kitchen and help out my mom. My brother wouldn’t even serve himself lunch. But the lockdown turned him into a chef and now he spends most of his time in the kitchen.”

Lockdown stories similar to those of Pallavi, Sara and Dr Nagar have given rise to hope that our homes may finally be on the way to becoming more gender neutral.

There is also historical evidence that cataclysmic events can sometimes produce lasting change in society.

Citing US Congressman Clarence D Long’s 1958 book, Prof Deshpande writes in her paper that “the years after World War II resulted in a rise in female labour force participation in OECD countries. This was also a time when the division of domestic chores shifted towards greater equality”.

So could the pandemic and the lockdown be the great leveller for Indian gender relations and bring about long-term change in the way we live?

“We would need to examine the evidence over a longer time period, as such changes unfold slowly over several years; a month-long lockdown is certainly no proof of the magnitude and persistence of shifts,” Prof Deshpande says.