Attackers ambush convoy of military vehicles at Bouka Were, in the latest attack close to Mauritanian border. 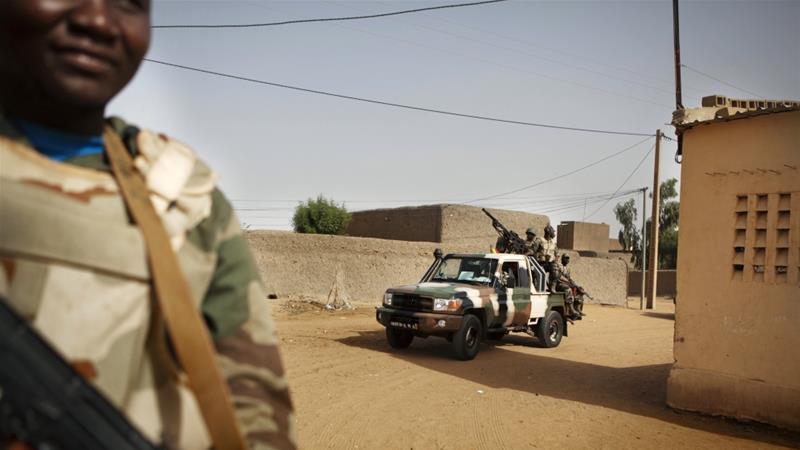 Dozens of troops have either been killed or gone missing after attackers ambushed their convoy in central Mali, according to reports citing military sources.

About a dozen vehicles came under attack on Sunday at Bouka Were, some 100km (60 miles) from the Mauritanian border, a senior military official was quoted as saying by AFP news agency, speaking on condition of anonymity.

Some of the vehicles were able to extricate themselves from the ambush, but of the 64 troops who had been in the convoy, only about 20 were present at a roll call, the source said, adding that the precise number of dead was unknown.

“A search is under way to determine the fate of soldiers who have been listed missing,” he said.

Another military officer and an official in the nearby town of Diabaly, who also spoke on condition of anonymity, confirmed his account, according to AFP.

On Sunday, the United Nations said gunmen killed two of its peacekeeping force in the northwest region.

In recent years, Mali has been facing a worsening security situation. What began as a localised revolt in the country’s north in 2012 soon spread to the centre of the country and then to neighbouring Niger and Burkina Faso.

The UN peacekeeping force, a French military intervention and military campaigns by national armies, have failed to stem the violence, which killed 4,000 people in the three countries last year and displaced hundreds of thousands.

The conflict has exacerbated ethnic tensions and local grievances over poverty and the absence of the state, giving rise to ethnic militias and bolstering support for armed groups, some of which are linked to al-Qaeda and the ISIL (ISIS) group.

Al Jazeera’s Nicolas Haque, who has reported extensively on Mali, said there have been almost daily attacks on the country’s army in recent months, with hundreds of soldiers killed over the course of the year.

He added: “The situation is getting even more unstable in Mali, not only the security situation in the country’s north and east but also in the capital, Bamako, where more protests are expected” later this week.

Earlier in June, thousands of people pour onto the streets of Bamako to demand the resignation of President Ibrahim Boubacar Keita, condemning what they described as the government’s mishandling of the many crises plaguing the country.

“The president made an announcement to the nation on Sunday, reaching out to the protesters and he’ll be leading discussions with the influential cleric who’s behind the protests, Mahmoud Dicko,” Haque said.

“This is happening at a time when the UN Security Council is meeting to renew the mandate of the Malian peacekeeping force at the end of the month,” he added.