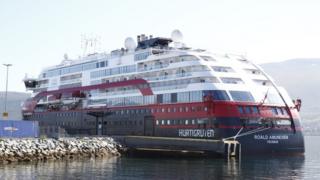 At least 40 passengers and crew on a Norwegian cruise ship have tested positive for Covid-19, officials say.

Hundreds more passengers on the MS Roald Amundsen are in quarantine and awaiting test results, the company that owns the ship said.

The ship, which belongs to the Norwegian firm Hurtigruten, docked in the port of Tromso in northern Norway on Friday.

Hurtigruten has halted all leisure cruises because of the outbreak.

“We are now focusing all available efforts in taking care of our guests and colleagues,” the company’s Chief Executive Daniel Skjeldamsaid in a statement.

“A preliminary evaluation shows a breakdown in several of our internal procedures,” he added. “The only responsible choice is to suspend all expedition sailings.”

Four crew members were admitted to hospital on Friday with coronavirus symptoms, shortly after the ship docked in Tromso, and later tested positive for the virus.

Another 32 of the 158 staff on board were infected, test results showed.

But almost 180 passengers were allowed to disembark the ship, leaving the authorities scrambling to locate and test those who had been on board.

All the passengers have now been contacted and told to self-isolate, health officials said on Sunday. Five passengers have so far tested positive out of 387 who have travelled on the ship since 17 July.

“We expect that more infections will be found in connection to this outbreak,” Line Vold, a health official, told Reuters news agency.

The MS Roald Amundsen had been on a week-long voyage to Svalbard in the Arctic, and was also reportedly scheduled to visit ports in England and Scotland in September.

But all future journeys are uncertain as the cruise industry finds itself affected by the coronavirus pandemic once again. Thousands of passengers were stranded at sea earlier this year as ships were hit by outbreaks of the virus.

These included passengers on the MS Roald Amundsen, which was stranded for several days in March after Chile refused it entry because it had confirmed Covid-19 cases on board.

And while the industry has restarted in recent weeks, there have already been setbacks.

A crew member on a ship in the Pacific tested positive for the virus on Sunday. The Paul Gauguin was forced to suspend its journey when the case was detected by the ship’s doctor, local media report.

Passengers were told to stay in their cabins as the ship turned back to Papeete on the island of Tahiti, where all on board are being tested.

Ahead of resuming operations, Ponant, the company that runs the Paul Gauguin, had reassured customers in a blog post that it had strict regulations in place that “go further than the international standards for the sector”.