As Texas was crippled last month by frigid temperatures that killed more than 100 people and triggered widespread blackouts, drilling companies in the state’s largest oil field were forced to burn off an extraordinary amount of natural gas — on the worst day, an amount that could have powered tens of thousands of homes for at least a year.

The need to intentionally burn off, or flare, an estimated 1.6 billion cubic feet of gas in a single day — a fivefold increase from rates seen before the crisis, according to satellite analysis — came as the state’s power plants went offline and pipelines froze, so the wells simply had no place to send the natural gas still streaming out of the ground. As a result, the gas had to be set ablaze, fueling towering flames, the highest of which can reach hundreds of feet into the air.

“This is clearly one of the highest spikes” in flaring ever observed in the Permian Basin, said Mark Omara, a senior researcher at the Environmental Defense Fund who led the analysis, which was based on satellite data from the National Oceanic and Atmospheric Administration. “And it could be an underestimate,” he said.

The trends were corroborated by Mikhail Zhizhin, a researcher at the Colorado School of Mines, who pioneered the use of satellite observations to measure flaring. There were some uncertainties and limitations to using satellite data, he said: Clouds could obscure the view, for example, and smaller flares, or ones that are lit only for shorter periods of time, could be missed. And calculating volumes of gas needed to be calibrated for specific oil fields.

Still, “These are obvious outliers,” he said of the flaring volumes seen during the blackout. “It’s a sizable event.”

The findings are the latest example of the consequences of the Texas crisis that are only now becoming clearer. Far more people died in the winter storm — at least 111 people lost their lives, nearly double an earlier estimate — state officials said on Thursday. They also underscore the risks of the state’s heavy reliance on natural gas to generate power, even as some fossil-fuel advocates misleadingly tried to blame frozen wind turbines for the blackouts.

Natural gas was once hailed as a “bridge” toward renewable forms of energy such as wind or solar, because gas burns more cleanly than oil coal. But in recent years, researchers and environmental groups have raised growing concerns over the climate-change consequences of turning to natural gas.

Flaring is one reason. Burning off unused gas instead of capturing it not only wastes a valuable energy source, it emits carbon dioxide, a greenhouse gas that is the main contributor to climate change. 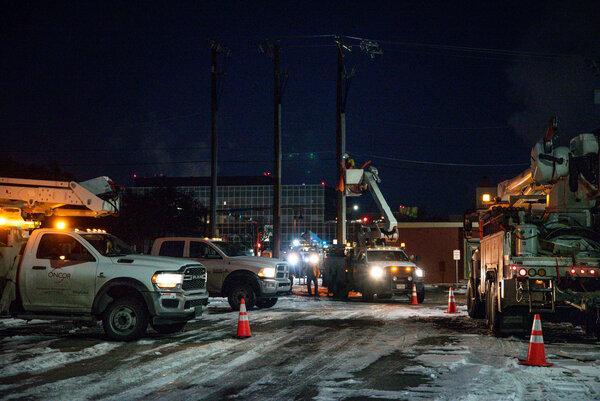 Of course, if there had been no Texas blackout crisis, much of that natural gas would have been burned in power plants to supply energy to homes and businesses. But flaring is also damaging because the burning is sometimes incomplete, so it can also release uncombusted gases into the atmosphere, chiefly methane, which is a far more potent greenhouse gas than carbon dioxide in the shorter term.

Those emissions are just one part of the total amount of gases released by processing plants refineries, power plants and other oil and gas facilities as they struggled to cope with the extreme cold. Rystad Energy, a research company, found that flaring from those facilities reached 180 million cubic feet of gas a day in February, the highest since Rystad started tracking the data in 2018.

“The extreme weather conditions that Texas experienced in February forced many facilities to flare gas, as there was no other exit,” Artem Abramov, head of shale research at Rystad, wrote in a research note. “Just immediately closing the gas tap is not possible.”

Under pressure to rein in emissions from oil and gas production, the Oil and Gas Climate Initiative, a consortium of the world’s largest producers, says its members aim to end routine flaring by 2030. But that pledge would not cover flaring prompted by disruptions like the Texas freeze, or in emergencies where flaring becomes necessary to reduce the risk of fires or explosions.

Julien Perez, the consortium’s vice president for strategy and policy, said in a statement that its members had collectively started to cut down on flaring, “reflecting a shared commitment to reduce volumes of natural gas flared.”

A Guide to Climate News