Mountain Tides took on the challenge of exploring the subtleties of petit sirah, a brassy grape long used to help color and flavor wines.

The Mountain Tides labels are based on photos evoking the distinctive character of the vineyards. This one is from Clement Hills.Credit…Dexter Hake for The New York Times

NAPA, Calif. — Scott Kirkpatrick never cared much for petite sirah. He liked wine that went with food, and he regarded most wines made with the grape as too big, tannic and powerful to enjoy at the table.

So naturally, when he considered making his own wine after working for others in Napa Valley, he knew that he wanted to focus on petite sirah.

“I saw beautiful grapes, but I didn’t like the wines,” he said in September when I visited him at the utilitarian production facility he shares with another label in an industrial park near the Napa County Airport. “I wondered if it could be lighter and fresher, a wine I would like with energy and a lot of joy. And things kind of got out of hand after that.”

Since 2016, when he and his wife, Allison Watkins, started Mountain Tides, a label dedicated to petite sirah, they have explored the grape’s capacity for producing energetic wines that could both complement food and express the nuances of various California terroirs.

Their initial effort was simply 75 cases of petite sirah from a single vineyard in Clements Hills, a small appellation in southeastern Lodi. This year, if all goes well, they plan to make eight to 10 different cuvées, 2,500 cases, all petite sirah. 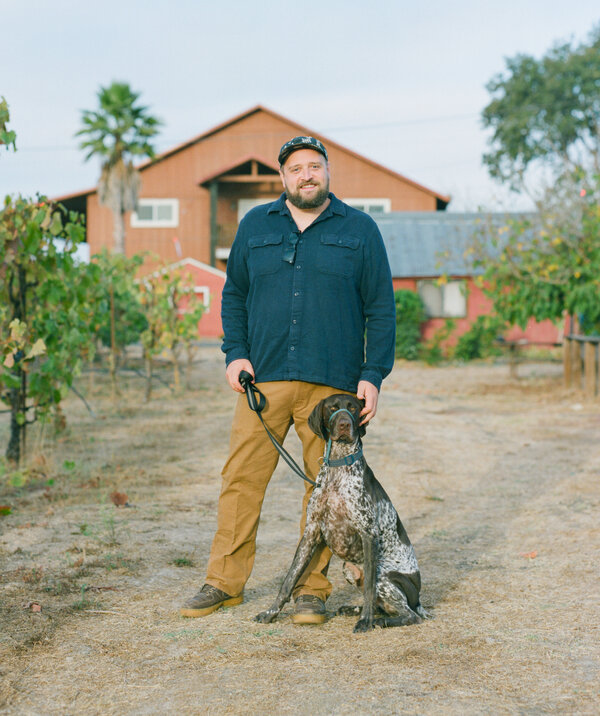 The wines have included a half-dozen single vineyard expressions from various sites in Northern California; a blend of vineyards; a petite sirah produced by carbonic fermentation, a method often used in Beaujolais, and for easy-drinking natural wines; and a petite sirah rosé.

“A friend accused me of being an inch wide and a mile deep,” Mr. Kirkpatrick said.

If you go deep on one grape, petite sirah is an unlikely choice. It has a long history in California, longer than in France, its homeland, where it was called durif after François Durif, a grape breeder who maintained an experimental vineyard in which it was discovered in the 1860s.

It’s virtually nonexistent in France today, but by the 1880s it had emigrated to California, found a new name and became a reliable component of some of the state’s old mixed vineyards.

Back in the era of preindustrial winemaking, instead of adding powdered tannins, tartaric acid or coloring agents to correct perceived imbalances in a wine, winemakers would grow and ferment together grapes with varied characteristics, creating a synergy in the blend. Petite sirah, deeply dark and profoundly tannic, was used to add color and structure to the mix.

These characteristics carved a role for petite sirah in California vineyards over the years. Back in the 1960s, when Gallo Hearty Burgundy was a popular jug wine, petite sirah was a key component, along with zinfandel and carignan.

It’s still popular for blending. According to the California Food and Agriculture Department, roughly 12,000 acres of petite sirah were in California in 2020, up from around 8,200 in 2012. Much of it is in the Central Valley, the source for cheap supermarket wines, but a surprising amount is in Napa Valley, too.

Petite sirah has its advocates, but it’s never been all that popular or respected as a varietal wine.

“Petite sirah, which has been around in California for a long time, turns out to be some tough grape from the south of France that has no class,” Frank J. Prial, the longtime wine columnist for The Times, wrote in 1990.

Most of the petite sirahs I’ve tasted have been sturdy and not particularly interesting. Older bottles can demonstrate the grape’s ability to endure for years rather than evolve. I didn’t see further potential for the grape.

But around two years ago I read an article by Elaine Chukan Brown, a California correspondent for the wine publication JancisRobinson.com, who noted a trend toward a lighter style of petite sirah. I was intrigued, and finally found a bottle of Mountain Tides, one of the producers she cited, earlier this year.

The bottle I tried was the California blend of various sites. It was fresh and delicious, a far cry from the petite sirahs of memory.

I’ve since found other petite sirahs I’ve enjoyed that likewise have strayed from the tannic and powerful style. Ridge makes a bright, spicy, lively petite sirah at its Lytton Estate in the Dry Creek Valley, and Cruse Wine Company has made a vivacious petite sirah from the Powicana Farm vineyard in Mendocino.

Petite sirah is practically an afterthought for these producers, who have other specialties. No producer that I know of has dedicated itself to the grape as Mountain Tides has. I was curious about what drew Mr. Kirkpatrick in.

His attraction to petite sirah, he said, was a little like his interest in comic books. He had always dismissed comics as irrelevant superhero stories. But then friends introduced him to the complex works of Art Spiegelman, Alison Bechdel and the Hernandez Brothers, among others.

“This medium could be used to tell an infinite amount of stories,” he said. “It’s just a medium that had been dominated by one type of story for decades.

“I think petite sirah is really similar. Somewhere in the past few decades, it seems to have taken on this singular persona of making muscular, aggressively concentrated, high-alcohol, almost-dessert wines.”

He wondered what would happen if the grape were farmed differently, with the goal of achieving ripeness at a lower sugar content, and made into wine with a lighter touch.

“It was never really about liking or not liking the variety,” he said. “It was about finding a path that seemed untrodden and being really enchanted by the things I could learn about wine and winemaking if I dug into this variety that I didn’t know much about.”

Finding his own way has been a life goal for Mr. Kirkpatrick, who grew up in Midland, Mich., in what he calls a traditional Baptist community. His father was a preacher, and wine and other alcoholic beverages, Mr. Kirkpatrick said, were taboo.

He left Michigan to seek his fortune as a singer-songwriter, landing in Louisville, Ky., where, like many would-be musicians, he got a job in a restaurant. He started to learn about wine, he said, to get bigger tips, but found wine had far more to offer.

“I was blown away by the potential for storytelling,” he said. “I found that really compelling.”

Soon finding himself more interested in wine than in restaurants or music, he decided to move to Napa Valley in 2013 with the notion of making his own wine.

While working at a custom-crush operation, where clients without their own facilities can use the space and equipment to make wine, he met Ms. Watkins, an artist and photographer. In 2016, their first vintage, they settled on the name Mountain Tides, focusing on the connection of earth and water and the movement between the two.

Mr. Kirkpatrick is the winemaker, Ms. Watkins does the marketing and designs the striking labels — different ones for each cuvée, all based on photographs she has taken depicting the characters of the various vineyards. She also brings an artist’s eye to the appreciation of petite sirah.

“The color that comes off petite sirah is so beautiful when you press,” she said. “It’s like paint, so vivid, like strong magenta.”

Mountain Tides only works with vineyards that are farmed organically, and while Mr. Kirkpatrick does not place himself in the natural wine world, he says he tries to remove himself from the winemaking equation, preferring to guide a wine to where it wants to go rather than dictate a destination.

“I made a conscious decision to be more of a listener than a talker,” he said. “I can give up the control and be more compelled by the unfolding.”

In an effort at transparency, Mountain Tides will list ingredients on its labels, beginning with the 2019 vintage, though the bureaucracy moved slowly enough that not all the 2019s include them.

The wines bear out Mr. Kirkpatrick’s hope that petite sirah could produce something more expressive and nuanced. A 2019 from the Rorick Heritage Vineyard in Calaveras County, a combination of limestone and schist, is focused and precise, with fine tannins and cherry flavors.

By contrast, a 2019 from the Clements Hills in Lodi, a vineyard with dense red clay, is broader and more generously fruity. A 2016 from that vineyard, Mr. Kirkpatrick’s first release, had softened and developed some subtleties, not a word I’ve used in the past with petite sirah.

Meanwhile, a 2020 California petite sirah made mostly by carbonic fermentation was an easygoing, spicy thirst quencher.

Mr. Kirkpatrick’s family was initially taken aback by his path toward winemaking.

“A pastor friend of my father told him, ‘What more spiritual thing could he do than work in vineyards,’” Mr. Kirkpatrick recalled. “It threw Dad for a loop, but he mulled it over and came to enjoy the idea.”

Mr. Kirkpatrick and Ms. Watkins are starting a new label, Earth Signs, that will be dedicated to old-vine zinfandel from Mendocino County and Lodi. That’s more about keeping things fresh for them, as zinfandel already has a track record of many varied styles.

Petite sirah will remain the focus of Mountain Tides, which is a good thing as it’s already demonstrated that the variety has more potential than I imagined.