The poll of 1,000 people, conducted by Odoxa and Dentsu Consulting for Le Figaro newspaper and France Info radio on April 8-9, found that 72 percent of French people think face masks should be compulsory for anyone stepping outside their house. Some 77 percent of respondents, for their part, slammed the government’s mask policy as “incoherent,” while another 76 percent said officials had lied to the public about their effectiveness to cover-up an acute shortage of them. Since the start of the outbreak, many Western countries have insisted that the widespread use of masks is not necessary, though scores, including France, have since changed their tune.

After weeks of stating it was not necessary to wear a mask unless you were sick or worked in the medical profession, France’s Academy of Medicine said last week that a mask should be compulsory during outings both during and after the current lockdown.

President Emmanuel Macron’s government quickly followed with an announcement that the manufacture of non-medical masks to be used by the public would be stepped up and that it had ordered two billion face masks from China.

But it refrained from making their use mandatory, simply because there is not the supply to meet the demand.

Until now, there has been little robust scientific evidence on the effectiveness of face masks in slowing transmission of respiratory diseases such as Covid-19, the illness caused by the new coronavirus.

The World Health Organisation (WHO), for its part, says masks should be worn by anyone with symptoms such as a cough or fever, or anyone caring for a coronavirus patient, but does not advise healthy people to wear them in everyday situations.

Most experts say they should be combined with other prevention measures, such as hand-washing and social distancing.

France put its 67 million people on lockdown on March 17 in an effort to contain the rapid spread of the virus. The measure, which has already been extended once, will now go beyond April 15, Mr Macron’s office said on Wednesday. 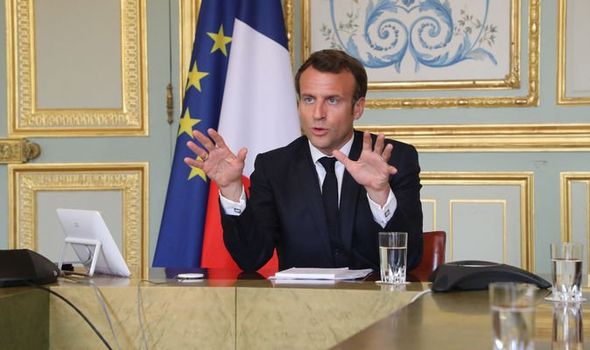 But the French lockdown is finally yielding positive results.

The number of people in intensive care units (ICU) for coronavirus infection fell for the first time since the start of the epidemic on Thursday, health chief Jerome Salomon said.

“Our defence against this murderous epidemic is beginning to bear fruit, and it is because of this that we need to continue confinement,” he told a daily video conference.

But in a sign that the virus is still running amok in nursing homes, health ministry data showed that the cumulative toll there jumped by 929 deaths, or 52 percent, to 4,166 over two days.

Mr Salomon added that the total number of confirmed or possible infections in hospitals and nursing homes had increased by 4,799 to 117,749.

The flu-like virus, which first emerged in China late last year, has infected more than 1.5 million people across the globe and killed over 94,000.