Denmark football captain Simon Kjaer has been hailed as a hero for his quick response to teammate Christian Eriksen’s collapse during their Euro 2020 opener against Finland.

Eriksen is stable in hospital following the incident in Copenhagen on Saturday evening, which saw the former Tottenham star suddenly fall to the ground with no other players near him.

The 29-year-old, who had no history of heart problems, was shielded from the television cameras by his distraught Denmark teammates as medical staff tried to resuscitate him on the touchline.

Skipper Kjaer was among the first to rush to Eriksen’s side when he went down and has been credited with playing a potentially life-saving role in the response – as well as for how he led the Danish players in forming the ring and comforted Eriksen’s distraught partner, who went on to the pitch. “Before the medics got there he secured his neck, cleared the airways and started CPR.

“Could have saved Eriksen’s life. Act of heroism.

“Kjaer trying to keep also Christian’s wife strong, is very emotional. What a man. So proud of you.”

Dr Philip Lee said that Kjaer had “saved his friend’s life”, and tweeted the 32-year-old to say: “Your leadership to the Danish team, your quick thinking, and your actions, are an example to us all.”

Former footballers are also among those to have praised Kjaer, who was said to have been left too overwhelmed to complete the match when it resumed later in the evening.

Finland went on to win the Group B fixture 1-0 via a 59th minute goal from Joel Pohjanpalo, who was restrained in his celebration in light of what had happened. Speaking afterwards, Denmark coach Kasper Hjulmand: “Simon Kjaer was deeply, deeply touched. He was in doubt whether he could continue and gave it a shot, but ultimately he couldn’t. I completely understand that.”

Hjulmand – visibly drained at his post-match news conference – said UEFA didn’t put the players under any pressure to finish the match.

He added: “I completely understand that you can’t play a soccer match at this level after watching one of your best friends fight for his life.” Kjaer plays his club football in the same city as Eriksen. The defender is with AC Milan, while Eriksen – who lit up the Premier League during his time with Spurs – is currently at rivals Inter.

Ex-Arsenal player Nico Yennaris said Kjaer “could possibly well have saved Eriksen’s life” on Saturday, but there are doubts over whether the midfielder will be able to play again.

Sanjay Sharma, professor of sports cardiology at St George’s University in London, who worked with Eriksen at Tottenham during his seven years in north London, said: “Without putting it too bluntly, he died today, albeit for a few minutes, but he did die and would the medical professional allow him to die again? The answer is no.”

Inter physician Piero Volpi told The Associated Press now was not the time to be making such assessments.

“Right now, the important thing is that he recovers,” added Dr Volpi, who also confirmed that Eriksen had never contracted COVID-19. After being shielded from view during his on-field treatment, Eriksen appeared conscious as he was taken away on a stretcher with an oxygen mask on.

He was given a standing ovation from the 16,000 fans in the stadium, who had been stunned into silence when the gravity of the situation became apparent. 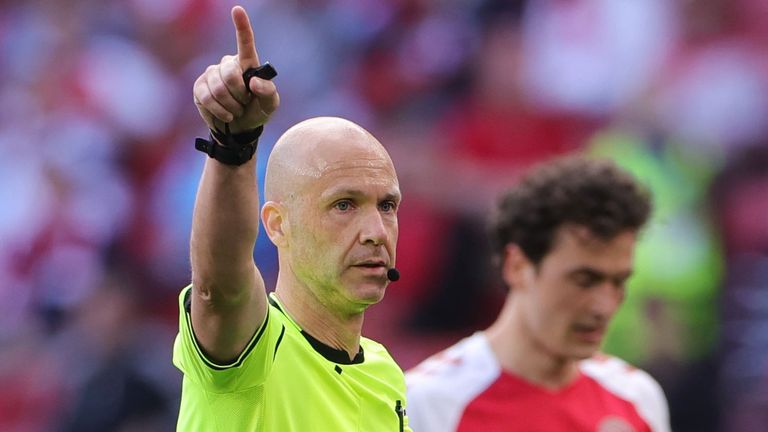 As well as Kjaer, Denmark goalkeeper Kasper Schmeichel – who plays for Leicester – and referee Anthony Taylor have also been singled out for praise.

Taylor, who referees in the Premier League, took seconds to halt play and call for medics.

Among those to highlight Taylor’s response were the Duke and Duchess of Cambridge, who tweeted after it emerged that Eriksen was stable in hospital.

“Well done to the medical team and Anthony Taylor for their calm and swift action,” they said.

The tweet was signed off by Prince William, who is president of the FA.

It’s not known if he’ll be at Wembley later when England begin their Euro 2020 campaign against Croatia. Both sides feature ex-Tottenham teammates of Eriksen, including respective captains Harry Kane and Luka Modric.